Its the summer. Its time for the festival season to swing into action. Music festivals, family friendly festivals, Yestival (touring festival for Scottish Independence), Edinburgh Fringe Festival (August) and a plethora of others.
Today there were 2 festivals playing - one in Edinburgh, one in Glasgow.
I was in Edinburgh, at the 40th anniversary of the Meadows Festival.
It was a fantastic day out (running today and tomorrow), with a multitude of stalls selling vintage/antique wears - clothing/household bric-a-brac/ jewellery/etc, food stalls, typical 'hippie' stalls, political stalls, kids tents with entertainment, workshops. There were a couple of stages with live music, and there was our tent. The Red Tent. I took part in here, providing Indian Head Massage sessions, which were very relaxing - both for myself and the recipient.  Other sessions included relaxation workshops, baby belly dancing (for mamas and babas, pregnant ladies or jus anyone who wanted  to attend), breastfeeding and birth advice/information/support. It was a wonderful feeling to be part of this. Floral art under a tree I really wanted to buy this seahorse vase, but couldn't remember which stall it was at when I went back to get it - hope it likes its new home.
﻿
After my session had finished I went for a wander around the site, and found myself chatting to the friendly volunteers at the YES stall - the stall was buzzing. Its the only word I can use - buzzing! I cam away with more leaflets and a couple of Yes for Scotland badges - now one for my jacket and one for the handbag, as well as my CND badge from the Scottish CND stall - No to Trident! 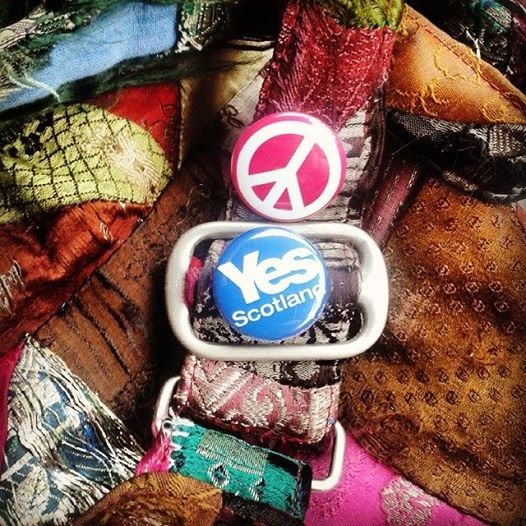 The sun was shining in Edinburgh today for the most part - then, true to form, the rain decided it didn't want left out, and joined the party around 2.30pm.  But hey, this is Scotland - it always rains, and we're not exactly going to dissolve (luckily I love the rain).  I was already homeward bound when the rain started as had my boys to go home to. Unfortunately they were not able to join me today in the festival spirit. Crowds are not always a suitable environment for Kiddo, with his PDA. They can make him very anxious and extremely susceptible to melt downs, especially when strangers try to talk to or engage with him - so he had lunch with Hubby and his grandparents instead. A rather delighted little boy told me when I got home : "I don't remember what I had for lunch.  More importantly though, Mum, I had a doughnut!" So I don't think he really felt as though he missed out on anything today.
The other festival in Glasgow was the Yes In The Park in Strathclyde Park - all about the Referendum on September 18th.  It looked like it was an awesome day ( reading from my Facebook and Twitter feeds, as well as fellow bloggers' posts) with speakers and stalls and music - all despite the rain.
Today is a day that I wish I could have split myself in 2 and gone to both, alas this is not possible.
Thankfully I have my mind made up on the up coming referendum, but plenty people have not, so hopefully they went to Strathclyde rather than the shops today.
Over the coming weeks and couple of months, I am hoping to attend more events, especially Yestival, show support for the Yes camp, and hopefully enjoy a family day out with my wee family too.
x
Posted by Lissa at 20:30 No comments: