Why vote YES - why the hell not?

Its my birthday and I'll champion YES if I want to

I don't remember anything about the last referendum held in 1979, being as I was a baby. I must confess, I didn't even know there had even been another referendum, until earlier this year!

What happened back then, in the Scottish devolution referendum 1979?

1. Similar to the 2014 vote, Scotland was asked 1 question : Do you want the Provisions of the Scotland Act 1978* to be put into effect? [Yes or No] 1,230,937 voted yes (51.62%) / 1,153,500 voted no (48.38%) .  The voting turnout was 63.8% of the electorate, but George Cunningham, Labour MP for  Islington South and Finsbury (Scottish born and raised), moved to amend the bill to affect a change that 40% of the total electorate must be in favour, rather than a simple majority. Although Scotland voted Yes, the total number of yes votes was only 32.9% of the electorate. It has since been argued that the 40% rule was most un-democratic.
* The act was to create a devolved Scottish Assembly.
2.  Promises made by the former Prime Minister, Lord Home of the hirsel (Sir Alec Douglas-Home) to voters to stay true to the Union, such as stronger legislation FOR Scotland in the next Conservative government, were not upheld by said government.
3. Although taxation was the key focus of the debate, the "No" campaign used public uncertainty and fear to their advantage. Fear of job losses, tax hikes, economic disasters. In the lead up to 1997's referendum to secure our own parliament, we were told large financial institutions, such as Standard Life, would take their investment and relocate outwith Scotland.
4. Following the referendum, the next government in power was 11 years of Margaret Thatcher's Conservatives, unelected by Scotland.

So what we learnt from 1979?
1. Every eligible voter MUST vote
2. Promises made by those no longer in power have no sway with those who are - take heed Gordon Brown.
3. They were right - there were massive job losses (15% of Scotland's workforce were unemployed in the early 1980's.) There were tax hikes...poll tax anyone? - all thanks to the Thatcher government. And Standard Life is still here!
4. Who fancies the next coalition - Tory/Ukip?? Not voted in by Scotland... 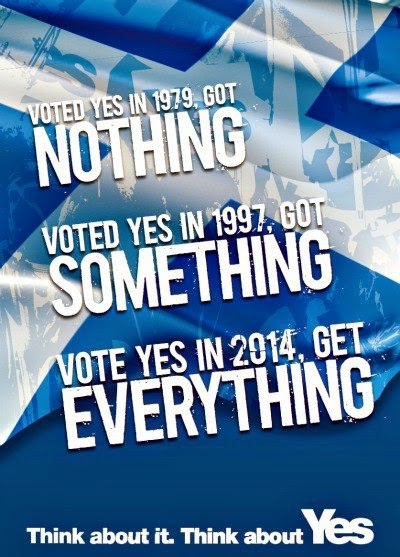