Devolution Max, or Devo Max as it has become known as, is almost independence, but not quite. Actually, no its not. Its a bit more devolution, but no-ne can decide which bits to devolve from Westminster to Holyrood and in all honesty, is a bit of a mess, in my opinion. To be polite, it could be described as a gift from Westminster to Holyrood, to taking on more powers to govern Scotland from Holyrood, without taking the leap from the perceived 'safety net' of the UK.
From a variety of different polls taken over the past year, it would appear that most people, eligible to vote in the referendum, are in favour of devo max over full independence or remaining with the status quo. As much as 62% of people polled in one poll, would voted for devo max.

My issue with devo max, however, is that no-one has agreed what it is. The 3 main parties, Labour, Conservative, Liberal Democrat each have their own vision of devo max, but they are not able to work together to give a definitive 'package' as to what this would look like post referendum, in the event of a NO vote.
Labour's proposal/vision for devo max, includes : the powers to vary tax up to 15p and, be able to, if they wish, re-introduce the 50p tax limit for high earners.  The proposal also includes, leaving much of the benefits/welfare decisions in Westminster, with the exception of Housing Benefit (therefore redressing the Bedroom Tax debacle) and Attendance Allowance.
Lib-dem proposal (taken from the Lib-dems's Report of the Home Rule and Community Rule Commission, Oct 2012) is for greater power in Scotland to raise more of the money it spends, control over taxation on wealth and income and radical recommendations for autonomy and power for local councils (which, to be fair, do read very encouragingly and positive, giving responsibility back to communities). It also, however, proposes Westminster controlling all welfare and pensions, and encourages the establishment of a Westminster controlled oil fund.  The Lib-dems would like to re-shape the UK into a Federal United Kingdom, but the likely hood of them winning a General Election as  one party as opposed to a coalition, is slim, therefore the proposals for a Federal Scotland, may not be as realistic as they would hope?
I have scoured the internet for the confirmation of the Conservative vision of devo max, but have drawn nothing. They will reveal their plans after the referendum... 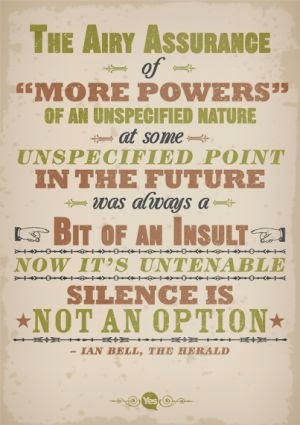 If we vote no on September 18th and Labour then go on to win the general election in 2015, we should then have Labour's vision of devo max come into play. Should the following general election choose to have a Tory government, then would that mean that the conditions of  devo max changes again? Potentially. Devo max is not a fixed concept, and we are ultimately at the mercy of the party in power.

As it stands, the 3 main parties cannot decide amongst themselves what devo max would look like in reality. This will allegedly be worked out AFTER the referendum.  However, one thing all 3 were united on, was the question to be posed on the ballot. Are you in or out, Scotland? No messin'.
Why did all 3 veto the addition of devo max as an option on the ballot paper?  The SNP were happy for the option to be there, despite their goal of full independence.  If devo max wasn't an option the parties wanted, why is it so important now? Why should we believe that the parties will actually deliver on their promise of devo max (what ever that turns out to be)? Are they being so vague, due to the fact that bringing devo max to fruition will take a lot of work, across the parties and through legislative changes and approval through Westminster, that in all honesty, they don't actually want it, and that's why its not an option on the ballot?

On the flip side.  What if we vote YES? We have zero proposals from Con/Lib/Lab on what their plans are for us at all. Many of the 'Undecided' voters claim to be uncertain due to lack of information or fear of the unknown, which is exactly where Better Together/No Thanks/ UK Government want them to be. They want us to trust them and put our faith in them while they are currently failing our most disadvantaged, protecting their own wealth and selling off our assets. With choosing Yes, you at least know what the current government plans are, and have a voice in creating the new modern Scotland with The Green Party and Scottish Socialists too - everyone committed and involved together.  The election in Scotland following the referendum, will choose who is running our parliament.  Some people may not like the SNP, but, we are blind to what the other 3 main parties want for an independent Scotland - and that is more un nerving than taking the leap now. 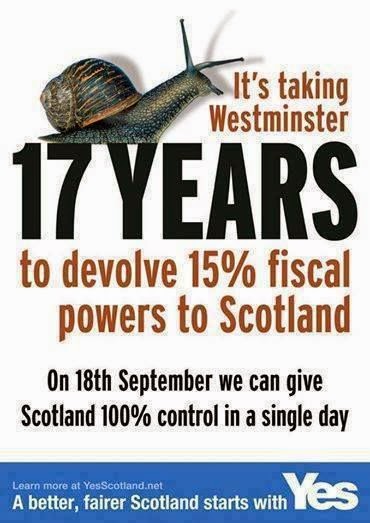 As the sun spirals its longest dance,
Cleanse us.
As nature shows bounty and fertility,
Bless us.
Let all things live with loving intent,
And to fulfil their truest destiny.
Today is the longest day of the year, known as Summer Solstice or Mid-summer. Exactly half way between last Winter Solstice/Mid-winter and the next.  It is when the power of the sun is at its zenith and from now, the we acknowledge that the 2nd half of the year has arrived.
To mark the solstice today, Kiddo and I set about decorating our front door and our broom at the entrance, with cocktail umbrellas. Not particularly traditional, but certainly festive and they feel summery.  I have to confess as seeing a wreath made of cocktail brollies on Pinterest, and thought, this is perfect for us. 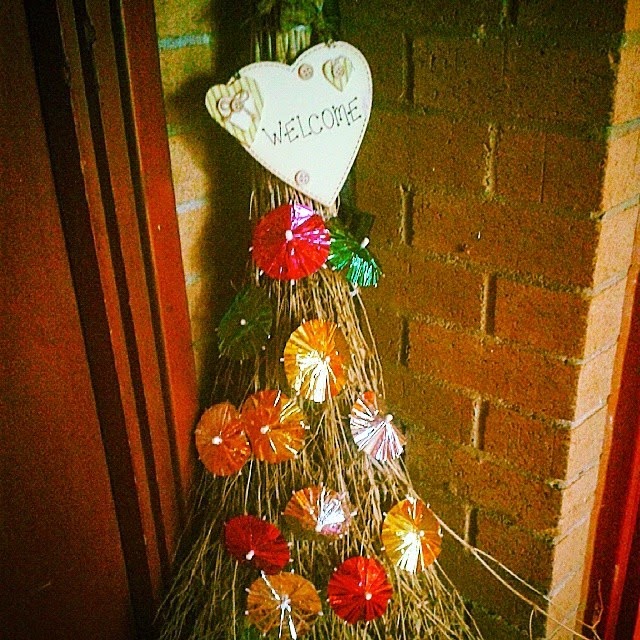 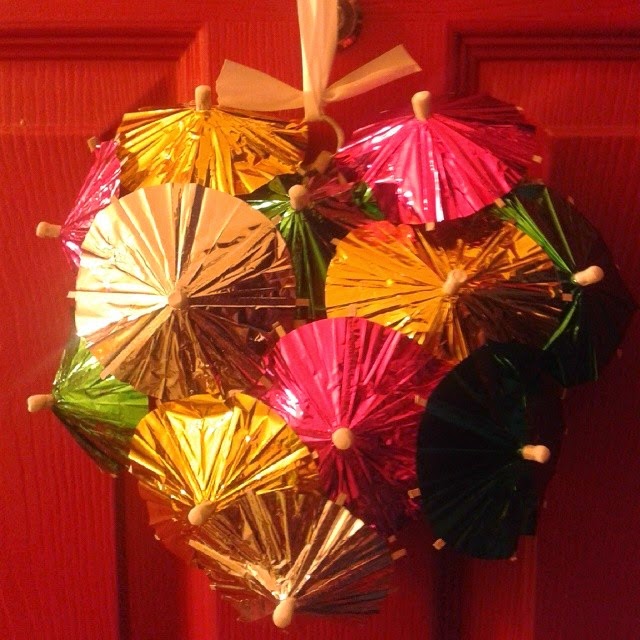 Now the sun has set on today, I have a candle lit (beeswax) and in the absence of mead (can't stand the taste), I have a wee Baileys. I raise my glass to health, happiness, strength and confidence.
Happy Solstice
x
Posted by Lissa at 13:48 No comments: