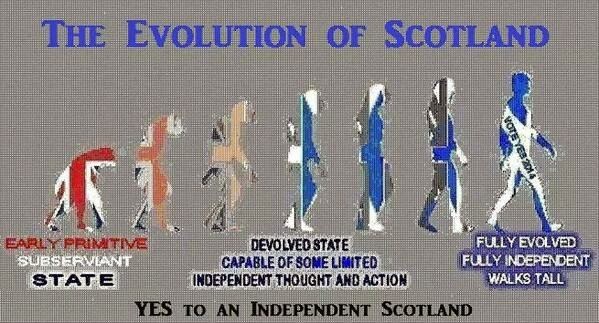 I don't see, hear or know personally, of anyone moving to NO!

This is not  case of "if all your pals jumped in the canal, would you too?"

Having moved through the stages of, why would be want a referendum, to NO, to I'm not sure, to YES,  I am always interested to hear other peoples' journeys to YES, too. The reasons tend to be fairly similar but different priorities.

The polls are showing a trend of people moving over to the YES camp.  Every other day I read about another Labour supporter now supporting Labour for Indy, or another youtube video being uploaded in support - the most recent one I watched from our supporters in Wales https://www.youtube.com/watch?v=UsiVjvN5I74

Is there anyone out there, who has gone from YES, through to NO? I'm interested to know why.
If the support for Yes is continuing to grow, surely we must all have the same belief / desire/ will / confidence to know that it is the right thing to do, and why then would we vote for anything else?
x
#100days100reasonsforyes
Posted by Lissa at 14:49 No comments: 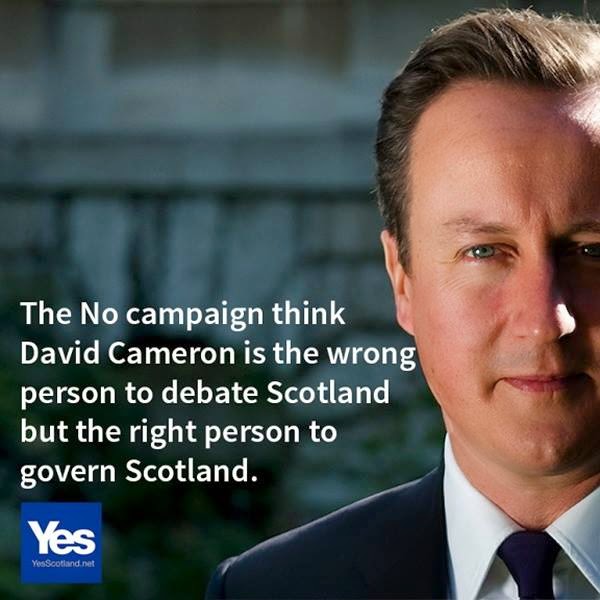 The First Minister of Scotland, Alex Salmond, invited the Prime Minister of the UK, David Cameron, to a televised debate regarding the referendum on Scottish Independence. An invitation that has been offered time and time again throughout the campaign period in the lead up to 18th September. Time and time again, the invitation has been declined, and a political back bencher has been offered up, to debate The First Minister instead.

16th July 2014, Bernard Ponsonby will host the debate between Alex Salmond, Scotland's First Minister, and  Alistair Darling, Head of Better Together, in front of an audience of 500 yes, no and don't know voters, in the Assembly Rooms, televised for STV.  Of course, the option to replace Mr Darling with himself,  remains open to the Prime Minister.

We want and need the debate, but not this one.  The First Minister should be debating the Prime Minister.  The person to debate Alistair Darling should be Dennis Canavan, the head of Yes. That is an equal match.  I find it rather insulting that David Cameron thinks that sending Darling, is a suitable replacement for himself.

David Cameron insisted at the start of the campaign that he would do everything within his power to keep the  UK united.  What that has turned out to be, is to try and get his pals to speak out on his behalf - although as to why, I am at a loss.  Cameron repeatedly reminds us that he has no vote in the referendum, therefore he won't get directly involved. So why does asking Vladimir Putin, Barack Obama, The Queen, Mariano Rajoy and Li Keqiang, none of whom have a vote,  to voice 'their opinion' on his behalf, not count as getting directly involved??? How did that work out? Well, Putin told Andrew Marr :"‘It is not a matter for Russia, it is a domestic issue for the UK." Obama, while he expressed an opinion that he supported the union (in the best interests for the US), he did make it clear that this was a decision for Scotland to make. The Queen has twice declined invitations from Cameron to support the union, insisting that she must remain neutral in the debate. Rajoy took to telling Scotland he would block membership of the EU - he's got no opinion of Scotland or the UK, he's more worried about Catalonia and Spain. Keqiang is in no position to comment on another country's democratic choices when he has Tibet and highly questionable humanitarian 'issues' in his own country.

The British public  (not just the Scottish public, according to reports) have come out to say they want the FM v PM debate, especially those of whom are still undecided.  Plenty people still have unanswered questions, and would very much appreciate the Prime Minister of the UK answering  these.  If he wants to ensure that he has done everything in his power to ensure Scotland remains within the UK, then he has to take on Alex Salmond.  Many people speculate that the reason that Darling is being rolled out for this, is because Cameron is scared.  Salmond is a first class debater and would, basically, be all over Cameron like HP on a bacon roll, therefore, the PM doesn't want to lose face.  Others, in defence of the Cameron, believe it is because he doesn't have the vote in the referendum, that it should be between 2 Scotsmen living in Scotland, 1 for and 1 against. In my opinion, I think the PM has lost face, by NOT debating and I don't think he is acting in the best interest of the UK. As the Prime Minister of the United Kingdom (currently Scotland, England, N Ireland an Wales), if he wants to keep it united, he needs to stand up and fight for it, not via the mouths of others, but from his own.  Talk to Scotland like he means it. 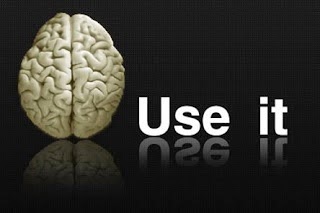 2 years ago I was voting NO! I know, unbelievable, right? My thinking at the time was purely, "How can that work?" and fairly knee-jerk reactions to the 16/17yo vote, thinking that was irresponsible and a new generation of William Wallace Freedom Fighters would emerge and vote yes for FREEEEEEDOOOOOOOOOMMMMM! I had, at that point, done NO research into what independence meant, just relying on the stuff I'd head on the news or read in the papers - all of which was negative of independence and at times derogatory towards the First Minister and the Scottish Government. I wasn't all that interested in politics, to be honest. It was both dull and infuriating.  Dull in the sense that I found it all a bit blah, blah, blah, but infuriating at the policies that were coming out of Westminster and the actions of the MPs.  There is no point moaning about the government and then sitting back and letting them get on with it. With the referendum coming up, I thought I'd better find out a bit more about it. But where to start?

I was new to Twitter, but followed a couple of friends who were Yes voters, and started reading the links they tweeted, and then Facebook stuff started appearing on my feed there too.  I started following groups and people on both social media outlets and different blogs, plus both the YES and Better Together websites, trying to glean as much info and opinions as possible, as found the newspapers somewhat lacking.
By January of 2013 I was properly, stuck on the 'don't know' fence. I read an article in the Guardian by Kevin McKenna http://www.theguardian.com/commentisfree/2013/jan/20/scottish-independence-becoming-only-option for the first time (it has been doing the rounds again recently) and it really made me think. It was the first positive article I had read in the national press.  With further reading, tweeting, facebook discussions, watching youtube videos of people all across the indy movement , I was definitely moving to YES.
By the time Alex Salmond gave his Key Note speech in October 2013, https://www.youtube.com/watch?v=NQzocfAyuys I was definitely Yes. I loved this speech and felt inspired by it.
Since then, I have been very vocal in my opinion on independence, whilst still reading everything I can get my hands on ( the joys of being a voracious reader, its like an addiction, I must keep reading!), I am hungry for information.  The more I have discovered for myself, the more I have got interested in politics and the fascinating world that it is.  People, every day ordinary folks, have to be involved and interested, in order to make a difference. To do that, we need to be informed - and no-one will do that for us, we have to find it ourselves.

I started writing this daily #100days100reasonforyes to show, essentially WHY I decided to vote YES for my country.  I don't expect that those who are voting NO will read it. I hope that some people who are currently don't knows will read it, and maybe think, a yes is possible. I know that my co-Yes-ers do read (and thanks for the feedback guys x)

With less than 3 months to go now until the referendum, there is a level of apathy that concerns me greatly. Some people are just not interested or "cannae be bothered wi' it aw'". Some people scroll right on passed the 'Indy stuff' on their social media feeds, and someone, said to my sister, "No, need to ask who your sister is voting for, eh?" Some people think , and I quote " It'll never happen, they'll not get it", eh, naw, YOU don't get it. This sort of thinking - automatic no, without any prior thought or consideration, will lead exactly to a No vote, because apathy and ignorance chose that path.

What I hope to share from this post, is how I arrived at YES (via information, lots of information devoured and shared), and urge everyone who hasn't yet made up their minds, to get informed to make theirs up too.  Either to a Yes or a No - make an informed choice.

It is simply not OK to just come away with flippant or ignorant comments towards such a monumentous decision, which will affect you and yours, and everyone in the country now and in the future. It is a HUGE responsibility placed on us to get this right.  It is not OK to say, with less than 3 months to go "I haven't really looked into it that much".

All the information needed to make an informed decision is out there. Who honestly wants to be having a conversation with their grandchildren in years to come that sounds like :

" Grampa, why did you vote No?
Because I couldny be arsed to find out if we could be independent."

"Granny, why did you vote No?
Because, politics was boring, and your Grampa said he thought we should vote No, so that's what I did."

By the way - the above 2 examples are the reasons from REAL people!

Be bothered. Get informed - its exciting! 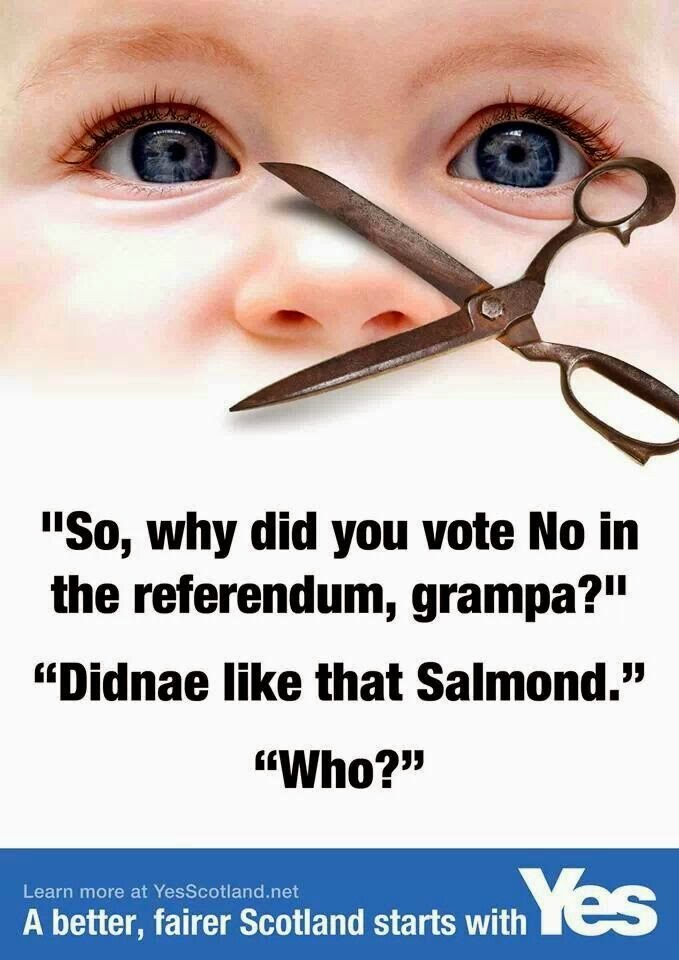