If you are internet conversant, and a regular user of  Facebook, Twitter, on-line newspapers, reader of blogs, you are generally inundated with news updates, and able to pick and choose what you want to read. Personally I use both FB and twitter daily, as well as having The Guardian, BBC News and Sky News apps on my phone, which I also check daily.  I follow The Independent, Bella Caledonia and Wings Over Scotland, among others, on my social media feeds, and several blogs.  So I consider myself to be fairly up to date with the happenings of the time.
For those who are not on-line, though, where do they get their news from? Generally TV and the newspaper, aka MSM (Mainstream media).
Do you trust that the information being imparted to our nation is unbiased, impartial and completely balanced?
In the run up to the referendum, it has become quite apparent that MSM is not quite as balanced as they would have us believe. But try telling that so someone in their 70's who believes the BBC and the Daily Mail, and are a staunch No voter!

Dr John Robertson from University of West Scotland has complied and published 2 indepth studies on the media bias when reporting on the referendum, particularly, the BBC.  His findings have shown that there has been, and continues to be, a preference of reporting 3:2 in favour of the pro-union stories. He has gone on to say "BBC Scotland, News and Current Affairs Department is now hopelessly compromised and nakedly campaigning for a No vote".   (quote taken from RIA Novosti), with his second report stating " “perceived institutional anti-independence bias in BBC news reports.”.

A perfect example illustrating exactly how the BBC are biased in their reporting, in favour of the union, is the fact that a 500 strong demonstration took place to protest against the bias, outside the BBC Scotland building, and it was NOWHERE to be seen in any UK MSM, BBC included.  The only reporting of the protest, came from Russia Today.
Here is a link to a youtube video from the demo, the protesters telling exactly why they are in protest
https://www.youtube.com/watch?v=ICN_g1EvolQ 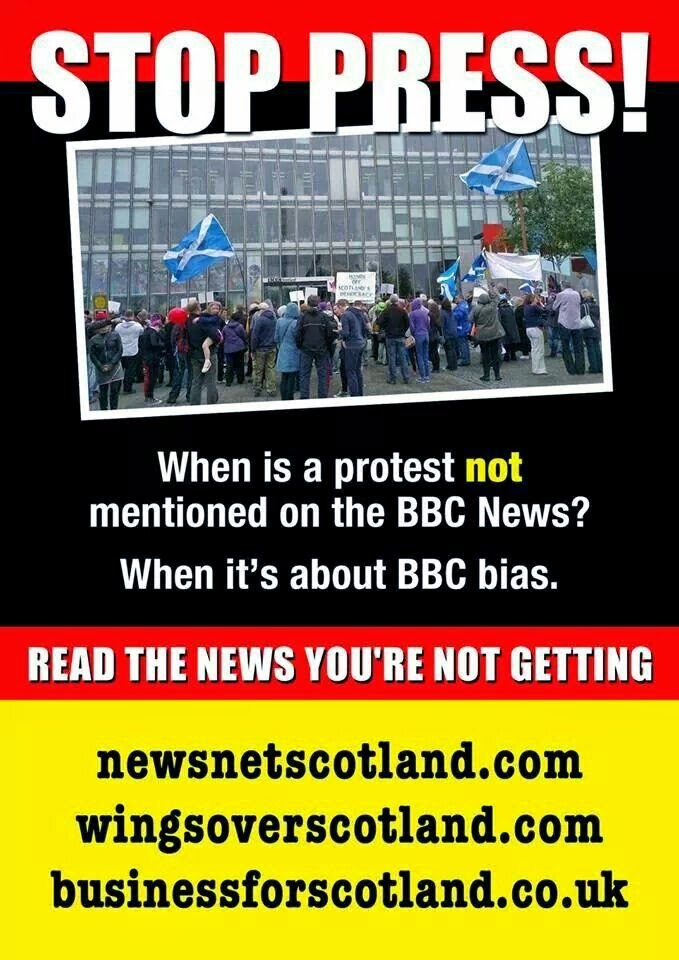 Its not just a bias on the content of the news articles, but also the manipulation of words to continue the bias. For instance, 'only a third of Scots support independence' with a third being a negative, really small number. Whereas, 'over a third of Scots are sceptical about independence', suggests that a third is infact a huge number. Phrasing is crucial in having a point interpreted by the masses in the way it was intended.

There is a very obvious trend when interviews are broadcast, be it on television or radio, that the Unionists are given pretty much free run of opinion, and are uninterrupted by questions, whereas the Independence Supporters tend to be repeatedly interrupted and interviewed in a consistently aggressive manner. A recent interview with John Major, highlights this, whereby he was able to speak at length on his side of the debate, and his opponent got less than 1 minute air time.

Just last night I watched Tommy Sheridan being interviewed by Sarah Smith, on BBC2's Scotland 2014 programme. He was being asked whether he was still with his wife, and whether people we going along to hear him talk about Scottish Independence or just going along to look at hm??? Was she actually serious? This shows a lack of respect to their guest, just sloppy journalism, and taking away from the importance of the matter - the indy referendum.  Shocking and disgusting.

There is regular demonisation of the First Minister which goes ignored by the corporation.  150 complaints were logged when Jeremy Paxman compared Alex Salmond to Robert Mugabe, but BBC defended Paxo and said it was in jest...watch the interview for yourself and see what you think (utter contempt and disrespect on Paxman's part, I feel)
https://www.youtube.com/watch?v=8wkcf7efAm4  (the comparison is in at 3.44).  They did however, apologise on behalf of Kirsty Wark when she was rude and abrupt towards the First Minister. Does the BBC not realise that Alex Salmond and his party won a landslide victory to be the government in Scotland?

So what happens to good old Auntie, when Scotland becomes independent? According to Gordon Brown, BBC would stop broadcasting north of the border, or we could face higher charges to watch our favourite programmes. Has he not heard of iplayer? What about when 50 odd different countries all watched the new Dr Who simultaneously? Does he honestly believe that we are a nation so stupid, that we would vote on the future of our country, based on whether we get to watch Strictly or Eastenders?
Personally, although I would miss listening to Radio2 in the car, I don't see that the BBC has a place in an iScotland, purely based upon the manner in which they have conducted themselves and their reporting in referendum matters.  Treating the citizens of Scotland as stupid and ignorant fools.  I think the suggestion of SBC may be better suited, and we can buy the programmes that we want (like they do in Ireland).

If there is still any doubt as to the bias in the BBC, do you think there is coincidence that the televised STV Big Debate between Alex Salmond and Alistair Darling was cancelled, by Darling?  Yet he has since agreed to the debate again, but this time its on the BBC...uh-huh..
Or how about BBC Radio Scotland hiring pro-union Labour MSP, Kezia Dugdale, to co-host their new political programme. (Kezia has since declined the position)?
Or how about when the CBI (Confederation of British Industry) publicly aligned itself with the pro-union side? Many of its members ceased their membership, including 4 Scottish universities and Visit Scotland, but the BBC refused to do so, therefore aligning itself with the No campaign, despite objections from their own journalists.  Where does that leave impartial journalism?

Since traditionally, the greatest majority of voters tend to be in the over 50 age bracket (the same demographic who, incidentally, tend to be the less internet savvy and rely heavily or solely upon MSM for their information), we MUST ensure that the information being put out there is unbiased, in order for them to be able to make an educated decision in the referendum. A vote based upon facts and information, not just the bits of information that the corporations and UK government want them to have, and lies that have been disseminated. Remember, our TV licence pays for the BBC.

If you are unhappy with the biased, unbalanced reporting being broadcast, feel free to join the next demonstration outside the BBC Scotland building on Sunday. I wonder if this will be reported this time? 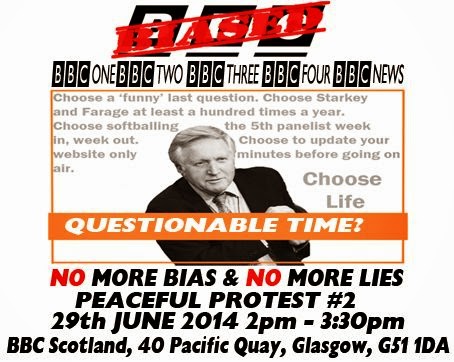 Its good bye from me, BBC.
x