I want to earn a Living Wage

The current living wage (outside of London) has been calculated to £7.65 per hour.
The current national minimum wage is £6.31 which is a difference of £1.34 per hour (or to a person working full time 39hrs per week = £840 per year).
Under an independent Scotland, the (current) Scottish Government has proposed in the white paper,  that they will raise the nat min wage inline with inflation or more.  Presently, the NHS and public sector are paying a living wage, and more local authorities are moving towards it too (although my own local authority have had a pay freeze for the past 5 years!), but there is much work to do within the private sector, where there are still 500,000 people earning less than the living wage.

Naturally, if people are struggling to make ends meet, on their national minimum wages, business (the economy) is going to suffer. How will it regrow if a great chunk of the population are unable to spend (invest) their hard earned pounds? When will employers realise that by paying a proper wage (ie a living wage) people would then have disposable income left after they pay their bills, in order to spend on luxury goods, a social life and  holidays (at home and abroad) etc therefore generating more sales and growing the economy?  Businesses and the government appear to neglect that little piece of common sense when they pay nat min or just above. They think that by keeping labour costs down and increasing the expectation of productivity, people are so grateful to have that job that gives them so much satisfaction and pride. Most of the low paid workers are over worked, underpaid, under valued and apparently grow magic money trees which supply the fictitious pounds to spend, or actually afford to cover the costs to feed and clothe their families as well as keeping a roof above their heads that is sufficiently warm enough in the colder months. 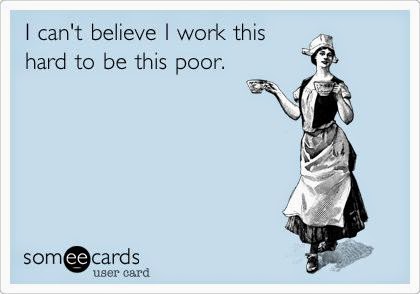 How do we know what the living wage is? The Living Wage Foundation tells us. I've quoted the following paragraph directly from their website :
"The Living Wage outside London rose from £7.45 to £7.65 on 4 November 2013.  This figure, used by the Living Wage Foundation to accredit Living Wage Employers, has been calculated for the Foundation by the Centre for Research in Social Policy (CRSP).
The calculation is based on the Minimum Income Standard for the United Kingdom, the product of research by CRSP, funded by the Joseph Rowntree Foundation.  The research looks in detail at what households need in order to have a minimum acceptable standard of living.  Decisions about what to include in this standard are made by groups comprising members of the public.  The Living Wage is therefore rooted in social consensus about what people need to make ends meet.
The uprating of the Living Wage figure each year takes account of rises in living costs and any changes in what people define as a ‘minimum’.  It also takes some account of what is happening to wages generally, to prevent a situation where Living Wage employers are required to give pay rises that are too far out of line with general pay trends."

I've also included for your own use, the minimum income calculator, for you to work out if you are earning enough to live at what is considered to be an acceptbale standard of living : http://www.minimumincome.org.uk/

Westminster is breaking down the welfare system, blaming the cost of welfare on lazy dole scroungers, when infact, many hundreds of thousands of claimants are actually in employment, some in full time employment.  What we need to be addressing is the fact that despite working, some people are simply unable to afford to live. Child poverty is on the increase ( 1 in 4 children in Scotland) and the number of families in the UK living below the breadline has more than doubled in the past 30 years.

So what can be done? I have already stated above, that the SNP are committed to ensuring the public sector are paying a living wage, in hope that he private sector will follow suit. The Scottish Green party believes that the unrealistic nat min wage is keeping in-work people in poverty, is a serious issue  while so to is the excessive bonuses paid to the Chief Execs. Their proposal for change is unclear. While the Scottish Socialist Party proposes a £9 per hour min wage for the public sector. No mention of the private sector but I would think it would be hoped that they too, would follow suit in due course. The Common Weal favours the 'speculate to accumulate' process, by investing in our own people and the return that would generate. 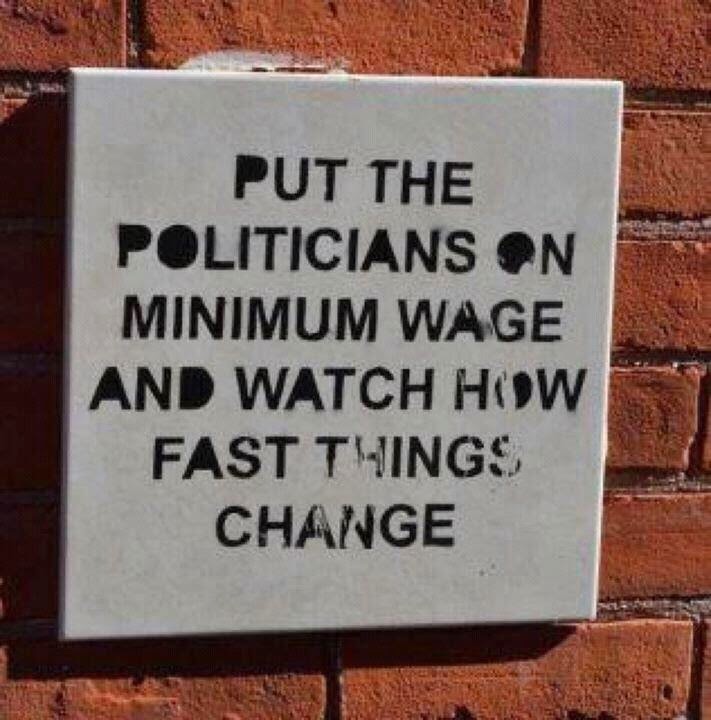 There is no flick of a switch to suddenly make all employers pay a living wage, but at least with a YES vote, we can put in place a change of culture and start to build towards a country that respects its people and commitment of its people to pay the people properly and reap the rewards, rather than outsourcing to the cheapest tender abroad and have a destitute, demotivated and skint workforce at home.