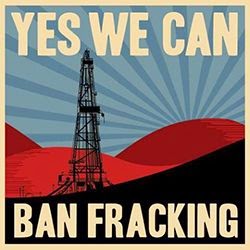 It was announced yesterday that the Central Belt of Scotland (home to me) is, despite only modest levels of oil and shale gas reserves, ripe for fracking. Michael Fallon (Minister of State for Energy) suggested that the findings helped make the case for Scotland remaining in the United Kingdom, arguing that "only the broad shoulders of the UK can attract investment in new energy sources".
Thankfully, at this moment in time, the Prime Minister is unable to just give the go-ahead to start drilling and fracking in Scotland.  How long will this be the case? Especially when Westminster start the "Licensing Round" whereby offering drilling rights to the highest bidder? How long before the false allure of cheaper energy (George Osborne, EDF and E.on already said that shale gas would not reduce energy costs) starts to seep into  the minds of the local population, that they agree to fracking?
Fracking has been ongoing offshore in the North Sea since the 1970's and onshore, in around 200 wells since the 1980s, but it was only recently brought to public knowledge in 2011 following 2 minor earthquakes, and the safety of the practice brought into question.
The Scottish Government have, so far, decided against a total ban  on fracking, but have instead put in stricter rules and regulations surrounding where fracking may take place, and that the public must be consulted. Yet in the Queen's speech earlier this year, she announced powers to fast-track fracking to take place under people's homes, without their consent!  Only with a YES vote can we get a shot at banning it altogether - see the interim constitution regarding environmental welfare.

According to the Ecologist, some the dangers of fracking include :
Pollution of local waterways - once they are polluted, they cannot be un-polluted
The toxins in the water can cause liver and kidney damage
Methane has seeped into an contaminated the drinking water supply in a small Pennsylvanian town.
America has been warned, at some point, it may have to choose between energy or clean water!
A family in Texas have been awarded $3m compensation for the  suffering to their health (past present and future), the damage to their livestock on their ranch and the decrease in value to their property.  Anyone seen Erin Brochovich??? Have we (the world, we) learnt nothing? ﻿
In the US where fracking is in operation, citizens have experienced 'faucet fires' whereby the water is so toxic that it is flammable! Livestock has been poisoned - that's livestock reared to feed the nation.
No thanks to fracking in Scotland. The Scottish government doesn't want it. Bulgaria and France have already banned fracking. Germany, the Netherlands, Denmark and Ireland have halted any further exploration, due to environmental factors, public petitions and objections, and until there are further studies proving its safety. Yet the UK Government seem hell bent on pushing for this unstable form of energy, when we have an abundance of renewable energy surrounding our island (wind and tidal), which, although wont provide 100% of all energy requirements, we could be looking at and investing in alternatives. Or, here's a radical thought, USE LESS energy!!! Think about how much energy is wasted willy-nilly in homes and work places across the country. I'm not suggesting for a minute that we return to the days of old, nights by candle light and powercuts, but sensible energy useage is not too much to ask, surely?

Other things to note regarding fracking are : the emissions from fracked gas are more than double that of coal. Some wells require between 1-8 million gallons of water to crack the rock. What a waste of a natural resource. I wonder if Westminster will put a stop on fracking during the hose pipe bans in the South of England during the summer...probably not...can't make money that way...

This is merely the tip of the iceberg with regards to fracking, and the short-sighted-money-grabbing idiots that are ruining Britain for their own financial gain.  Its maybe worth noting here, the old Native American Proverb : Only when the last tree has been cut down; only when the last river has been poisoned; only when the last fish has been caught; only then will you find that money cannot be eaten.

A group of artists, actors, musicians and activists made this video in protest against proposed fracking in New York:
Don't frack my mother video - https://www.youtube.com/watch?v=VfymhAEe-TM
Think about it. Frack Off!

So today, Mike Myers has come forward to throw his hat in the ring and declare that he hopes that "Scotland will remain part of Britain".  All this "love-bombing" is over whelming. The publicity it is generating is really something.  Celebrities from home and abroad are being asked for their opinion in the upcoming referendum, in which, many are unable to vote, given that they are don't live in Scotland, or for some, even in the British Isles. As soon as we hear the opinion of a 'celebrity' that Scotland should remain within the union, it is Breaking News!

So, in the interest of a fair comparison, I have compiled a list of which 'slebs are For or Against Indy, or have made it clear that they are unwilling to give their opinion.

And in no particular order :

Not sure I recall all these names in the For column being Breaking News as getting much, if any, media coverage at all when they publically chose to make their decision to vote YES, known.  I have not included any names of politicians, or many of the lesser known artists, have stuck to 'celebrity' or better known names, who have expressed their desire for a YES vote in September.
Does anyone notice anything quite telling between the 2 columns (I'm thinking of where these people actually live)?
x
#100days100reasonsforyes