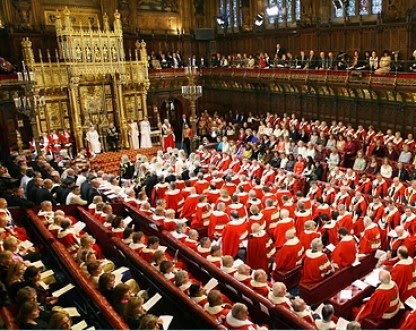 ﻿
There are 3 parts to the UK parliament, made up of  2 houses, one of  Lords (peers) and the other being the commons, which form the crux of the British political system. The 3rd part is the monarch.
Previously, the Lords were the most senior level in parliamentary hierarchy, but over the years with reforms, their power has been reduced considerably.
So, who are the Lords? They are the unelected elite, appointed by the current monarch as advised by the Prime Minister. Some are appointed as progression from political career, some are hereditary.
Now, what does the House of Lords do? The official answer from www.parliament.co.uk is :

"The House of Lords is the second chamber of the UK Parliament. It works with the House of  Commons to:
The House of Lords Chamber spends about 60% of its time on legislation; the other 40% is spent on scrutiny – questioning Government and debating issues and policy. Committee work takes place outside the Chamber."

As a side note, apparently that 40% doesn't not include scrutiny of its own kind, what with the  horrific stories now emerging of a paedophile ring from the 1970's and 80's that was known about and covered up. This is not an issue I wish to write about at this time, other than to say, I fills me with revulsion, distrust and rage - we, the taxpayer are funding the lavish life style of these lords, and some of them are monsters.
According to the report in the Daily Torygraph, as many as 40 politicians in Westminster knew of or were involved in the ring, yet it went uninvestigated, swept under the carpet. How many  more Jimmy Saville cases are going to come out?

Ok, back to the House of Lords.
So how much does this antiquated bunch of privileged 'betters' actually cost us, the humble tax payers?  Each individual peer 'earns' on average £74k per annum, made up of a £300per day allowance for each session they sit in. However, it has come to light that a fair few Lords from the upper house are clocking in, for short periods daily and are claiming that allowance.  In the 3 years between 2010 to 2013, the spending from the tax payer's purse has increased by £42m, but that may be due to the additional 103 peers who have joined the elite ranks in he same time frame. The operating costs per peer now stands at 3 times more than the Prime Minister hoped to SAVE! There have been changes to the houses over the years, and there is talk of another reform.  The cost of this reform, according to senior Labour peer, Lord Lipsey, economist and statistician, the calculated cost to the taxpayer will be £500m between 2015-2020 as the reform is phased in.

Aside from the astronomical cost of maintaining the upper echelons of parliament, where does an outdated system fit in with the modern vision of Scotland? With a No vote, its a case of 'as you were', where they enjoy the cream of the crop and the benefits of their silver spoon whilst the rest of the country is living through austerity.  With a Yes vote - Cheerio to lot of them! However they are not so keen to be rid of us. According to the House of Lords, Chair of the Constitution Committee, Labour Peer Baroness Jay of Paddington, even if Scotland votes Yes in Sept, if they (peers) deem that it is not in the best interest of the UK, they would delay independence.  She goes on to say that Scotland's date for full independence to come into effect (24th March 2016) has not legal bearing and that the UK PM cannot be held to that date.  She then further recommends that the concerns of the rest of UK are to be put before the rights of the scots regarding independence.

From the point of view of the House of Lords in the 21st century, and how iScotland would be different, I have to hand over to SNP MP Angus MacNeil and his thoughts on the matter :

[House of Lords was an] "undemocratic anachronism stuffed to the gunwales with over 800 peers of the realm who answer to no electors and are often there because of privilege or patronage".
"Under the Westminster system, we now have the ludicrous situation that there are far more legislators who are appointed than elected - and people in Scotland elect only 4 per cent of the parliamentarians who hold powers over the economy, welfare, defence, our place in Europe, and many other crucial areas of policy."
"The UK parties nominating their own donors to the House of Lords is part and parcel of Westminster’s crony culture - and the Lords is now the second biggest chamber in the world after the Chinese National People’s Congress, which governs a country of 1.3 billion"
"The SNP’s long-standing position is that we believe those making laws should be elected by the people, and therefore we do not nominate members to the House of Lords."

[In response to Baroness Jay] "To be lectured by them about timetables and for democratic processes is something that could only happen in Westminster."

[In regard to iScotland] "It will be elected representatives who will lead Scotland's transition to independence - not some elite club whose members can still turn up for just half an hour's work and get a £300 daily allowance."


Finally, why should the House of Lords be a reason to vote YES? Again, I hand over to Angus MacNeil :
"A Yes vote for independence means that people in Scotland can get rid of the expensive and unrepresentative Westminster tier - which means better and cheaper government.
It really is an affront to democracy that, at a time of economic austerity and cuts, this lavish anachronism grows in numbers - despite promise after promise that it will be reformed. Only a Yes vote in 2014 will enable Scotland to be governed 100 per cent by parliamentarians elected 100 per cent by the people of Scotland."