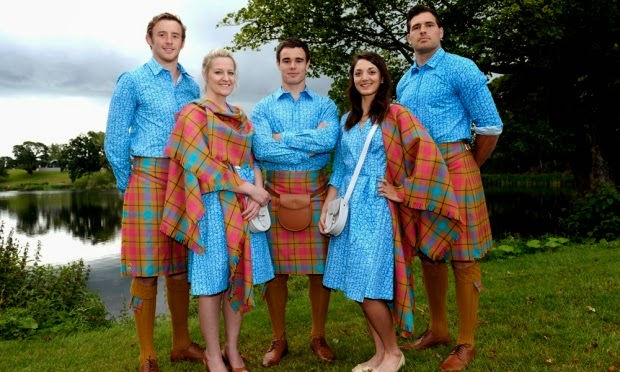 Team Scotland' official uniform has been revealed, to a largely shocked, audience.
Commonwealth Games Scotland chief executive and Team Scotland chef de mission Jon Doig said: "We wanted a parade uniform that had a bold and confident look, but which still retained the iconic Scottish elements of the kilt and unique Games tartan."
With that brief in mind, Jilli Blackwood (who is a textile designer and artist) created the above uniform.  While it has been positively received by the athletes, the general public have been less than enthusiastic in their response.
Criticism has largely been towards the ladies outfit more than the men's. Apart from the eye watering turquoise (representative of the Saltire), the most common critique I have come across fall into 5 clear opinions :
1 - Brigadoon! My initial thought was of a remake of Brigadoon. A friend, also thinking along the same lines, thought "Brigadoon on speed!"
2 - Picnic blanket! I think this is a bit harsh. I actually like the tartan. It is bold and funky and modern. Yes, I like that tartan.
3 - Old lady cleaner from 1950's and before. Style and fabric of dress appears to be reminiscent of grannies cleaning their stairs back in the day.
4 - 1970's air stewardess. The wrap dress was supposed to be modern and flattering, but, it reminded many people of the glamorous aviation heyday of 70's. Ladies, your exits are here, here and here!
Vintage and retro are always in fashion, the trick of making it look modern and fresh is to mix it with modern or personal touches. The shawl doesn't fit that criteria.
5 - Supergran! Gudrun Ure. No self respecting child from the 80's could forget Supergran and her iconic theme tune sung by Billy Connolly. (incase anyone is unfamiliar, or needs a wee reminder : https://www.youtube.com/watch?v=NClF7D7Gjyc )

Since granny-chic and vintage are 'all the rage', is the new uniform really all that out of touch, once you get your aviators  on to shield your eyes from a turquoise assault?
If the athletes are happy, and they are ones having to wear it, does it matter that most of the country have professed their embarrassment for the ensemble?

Perhaps, once we are independent (got to get that in), we could hold televised 'heats' to pick our nation's parade uniform for future games - to ensure pride rather than cringe - like for the Eurovision Song Contest?

For a bit of fun, how awesome would it be for Team Scotland to walk out in the Commonwealth Opening Ceremony parade, to their own theme tune, taking the public feeling of Supergran with them?  We could all sing along.  To facilitate this, I have supplied the altered lyrics (I've changed the names of famous people to Commonwealth countries. Disclaimer : this is for fun, no offense intended)
Everybody ready. a 1, a 2,a 1,2,3,4 : 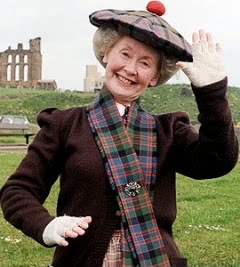 Stand back Canada, England, Australia.  South Africa and Wales too
Don't wanna cause a rammy, but Seychelles, ya jammy..., have I got a match for you.
Scotland makes them look like a bunch of fairies.
We've got more bottle than United Dairies.
Hang about - Look out! For Team Scotland.

We can take Jamaica. Grenada, Gibralta, Cyprus and New Zealand too.
They say Singapore is just another phoney.  They couldn't lace their shoes.
After us they're all big girls blouses we've got more front than a row of houses

Hang about - Look out! For Team Scotland

Hang about - Look out! For Team Scotland!