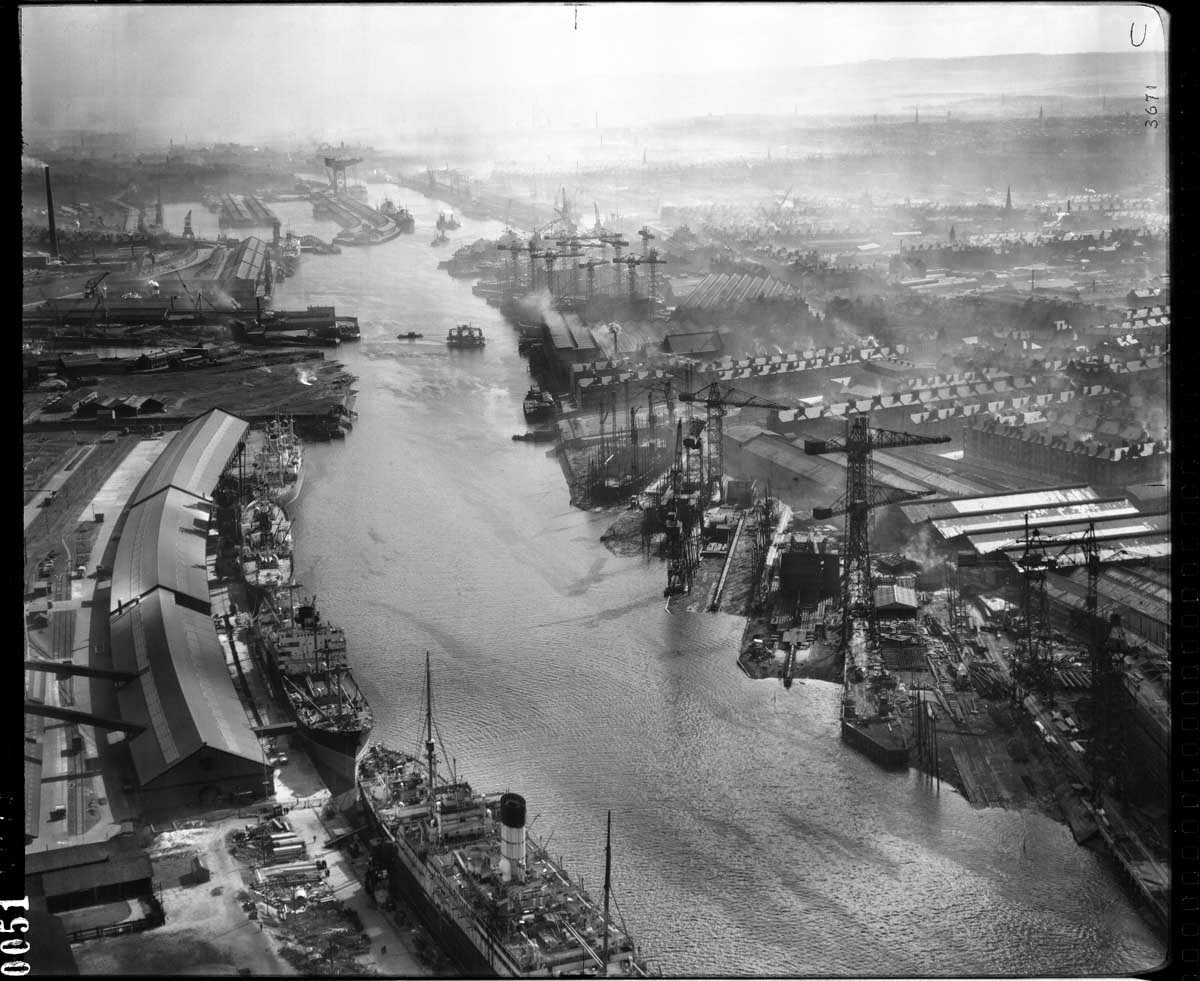 RAF photograph from 1950 of the Govan shipyards operating at their peak. SC1096028
There has been much said about the future of ship building in Scotland, following a YES vote, this week in the press. Apparently, if we choose to think for ourselves and actually decide that being in control of our own wee country, then we are choosing to kill off the ship building industry, stone dead. Ehm, the Yes vote is not the same as a bottle of bleach. Nothing will be killed stone dead, well, with the exception of Westminster lording over us.

The industry has been in decline for decades. Even 60 years ago the Japanese and Korean ship yards were gaining ground by being more competitive than the Scottish yards, due to massive subsidies and more modern design and construction methods. By the mid 1960's and early 70's following strike action, many a yard had closed. Thatcher then saw off the rest, (35,000 people working the yards in 1979 dropping to 11,000 by 1993), leaving just 2 ship yards on the Clyde, Govan and Scotstoun, currently run by BAE Systems. Even still, BAE Systems announced in November 2013, 800+ jobs are going between these 2 yards and the one in Rosyth, where 3,500 people are currently employed.

The research for this particular post has been quite laborious, particularly in finding information to support Scottish Independence. All across the press and the internet, the worry and fear for the future of the Scottish ship building industry is clear. However, I am just as doggedly determined as the No Thanks party in proving my point, that Yes is still the way forward.

So what are the stories being reported, that are sending chills down the spines of the ship yard workers and holding their potential YES vote to ransom?
1. Scotland would be a foreign country.  Why would the MoD give a defence contract to a foreign country?

2. There have been no defence ships built outwith the UK for over 50 years.

3. The £270m investment in the Clyde ship yard will not go ahead in the event of a No vote

5. Without the UK defence contracts, Scotland's ship building industry is dead in the water.

However, I have an answer to each of the above concerns:
1. Taken straight from the Torygraph, I mean, Telegraph from November 2013 :
" BAE and many other defence companies are global multinationals; the equipment for modern warships can be – and is – made in many different countries, yet continues to carry the label of BAE Systems or General Dynamics or other big manufacturers. Many other countries have no problem buying foreign-built warships, so why should we? We already participate in collaborative defence projects or buy equipment off the shelf. Indeed, the Royal Navy’s new replenishment ships are being built in South Korea. "
In February 2012, a South Korean company, Daewoo, was awarded a contract worth £452m to build 4 new generation of 37,000-tonne Military Afloat Reach and Sustainability (MARS) tankers for the Royal Navy. This was awarded despite a bid for tender from BAE Systems yard in Govan. Believe it or not, it was actually the Labour (yes, Labour. Take from that what you will...) government that drew up this particular contract.  According to Newsnet Scotland :
"Critically, this was done without designating them as “protected” defence contracts which could have been tendered within the UK, as they would not then have been subject to EU competition laws.
It has also emerged that Tory Defence Secretary Philip Hammond rejected a bid led by an Italian company which would have seen the ships built in BAE System’s Govan yard, Hammond instead agreed a contract for them to be built in Korea."
Ian Davidson (Labour MP for Glasgow South West) actually commented on BBC 2's Scotland 2014, during an interview with Sarah Smith, that :
"...ships from South Korea are based on price not quality"
The big project at the fore of the discussion is the  building of the Type 26.  The design of which was, ironically,  a project between the UK MoD and Australia.
Other countries have no such concerns as to where their vessels are built, deciding that quality of the end product and skill of the workers are a priority. Ships for Brunei and vessels for Trinidad and Tobago have recently been commissioned and built here, in Scotland.

3. BAE Systems have already, along with Scottish Enterprise, invested heavily in the skills in this particular industry sector. There is their ever growing apprenticeship programme, which has not only ensures a fully trained workforce for the industry now (from those already through their apprenticeship) and in the future, but also the investment in the retention and renewal of shipbuilding skills.
BAE Systems are looking at the possibility of one new super all singing all dancing multi-million-pound frigate factory at Scotstoun.  Although they are left hanging with that until AFTER the referendum.  Regardless of whether the new ships are to be built on the Clyde, in the event of YES or NO, Westminster can't lose their fear card that they so enjoy wielding.

4. Chief Executive of BAE Systems, Ian King, has stated that " England has no yards capable of making such ships." as well as admitting that they had "no contingency plans"  should Scotland chose to vote YES as "all of the company's capability for building complex warships exists north of the Border".  He added: "If Scotland becomes independent…then we will have to have a discussion with our customer, the Westminster Government, about how they would like to deal with that,".
UK ministers, have also, only said that they "would likely" move to Portsmouth, not 100% definitely.
The cost of moving production to Portsmouth would be enormous for BAE Systems. Would that cost be factored into the quote tendered to Westminster? What if Westminster consider it too much - would they seek tender elsewhere, *sharp intake of breath* from possibly abroad? Would it not just be better to build the best ships on the best site with the skilled labour already inplace??
The MoD knew the referendum was coming, they knew there was a possibility of a YES vote (or were they too smug and confident, and just assumed that a NO vote was imminent?) What sort of business sense is to choose the Clyde for the preferred site if they won't "allow foreigners" to build defence vessels? Why start making a business decision into a political point scoring one?
SNP MSP for Anniesland, Bill Kidd has said:
"The Clyde isn't just the best place to build the warships the Royal Navy needs – it will soon be the only place in these islands following the decision to end shipbuilding in Portsmouth," and
"The fact is that the skills and capabilities of Scotland's ship building sector are what will help them to continue to win work in an independent Scotland."

5. I have to hand over to Ian McMahon ( Head of Aerospace, Defence & Marine for Scottish Enterprise ) when he commented in August 2010 :
There remains a stubborn belief - everywhere except in Glasgow itself and in shipbuilding industry and defence industry circles, both of which know better - that Scottish shipbuilding is dead.  Nothing could be further from the truth.  In fact, since 2001 the Clyde yards, operated by BAE Systems, have seen a massive resurgence and now employ almost 4000 people.
Skills are at the heart of the industry.  Recognising the need to address the skills losses of the late 20th century, BAE Systems set about an ambitious recruitment and training programme from 2002.  Who would have believed that it would be a Clyde shipbuilding company that would become Scotland's largest private sector employer of apprentices, with well over 800 joining its scheme since that time?
Even in the 21st century, 'Clyde-built'  still has a very positive reputation in the shipbuilding industry worldwide - and the industry and public sector partners are working hard to ensure that reputation grows."
Scotland's Deputy First Minister, Nicola Sturgeon said this, last year :
"The threat to defence jobs in Scotland is not independence, it's Westminster and we're seeing that day and daily...For me, the key lesson is the need to build a more diverse future for our shipyards. Naval vessels will always be an important part of the industry in Scotland, but it has become painfully clear that on its own it is not enough. As an industry - as a country - we need to internationalise, build the client base and boost exports"


Sure, there is the risk that Westminster will take its ba' and go hame. But, why can't the skills, expertise and dedication of the workforce be utilised for a more diverse range of building/engineering works?  I'm not saying there wouldn't be potentially more redundancies, but with without the reliance on the UK MoD contract, they would be free to go after contracts worldwide, and not worry, again, once the Type 26's were built, if they were once again at the face of mass redundancy, and what next big project might be? Who can say that the UK MoD won't start outsourcing more and more of their contracts in the future, once they have secured that all important NO vote? The spirit of Margaret Thatcher is alive and well and thriving in Westminster.  Surely its as much a risk to stick with NO as it I,s for daring to believe in better and voting YES? The fear of losing jobs in the next couple of years if they voted YES, as opposed to potentially losing more jobs and more yard closured in the long term if voting No? Or the new opportunities and broader horizons with various and varied contracts that YES has the potential to deliver?

I don't know exactly what the future holds, no-one does really. I believe that YES is worth it.  The Scottish government are fully behind ensuring the ship yards are a strong industry in the global market, and our people have the skills. 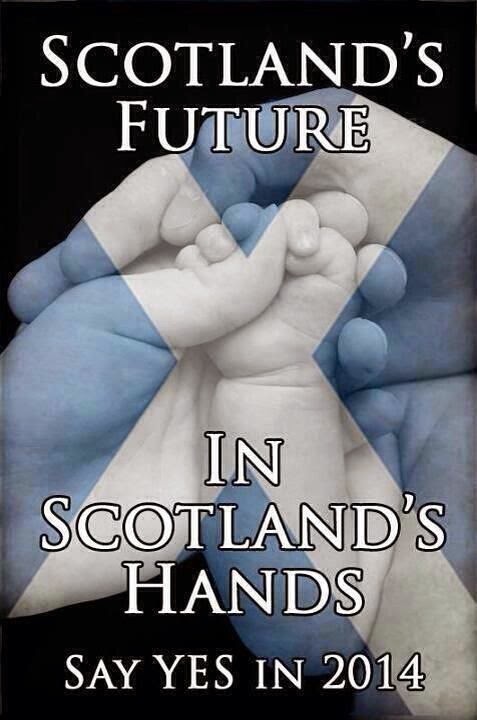 A Century in Film :

From Scotland with Love

A friend recommended this film a couple of weeks ago, and I watched it, but not all of it at the time.
I'm sitting blogging just now regarding my 100 days series for Indy, and see that it has been on TV again (Sunday 13th July on BBC 4 at 9pm, I'm watching it on catch up!)

This is a film, made entirely of silent footage of Scotland and the everyday people of Scotland living their lives. King Creosote provides the soundtrack, and I have to say that it is emotional stuff.

I love watching films, looking through old photos (doesn't matter if I know the people or not), reading old stories, about the lives of everyday people. About how they lived, where they lived, how the dressed, family life, everything - it fascinates me endlessly.  I think I must be an old soul, as I always feel some sort of connection to by gone eras, but only Scottish ones, strangely enough. A sense of excitement and nostalgia for a time I have never lived in! That I know of...

If you get a chance to watch, I thoroughly recommend it (its on for 71 mins and available on iplayer for the next 6 days)

Ok, back to my other blog post, or it'll never get finished....