(Before starting todays post, I have jumped from 70 days to 61 days.  The posts inbetween are in progress but need further information before posting. Gone straight to todays to get back on track and will post the missing ones in due course.)

Why Yes? For peace, not war. 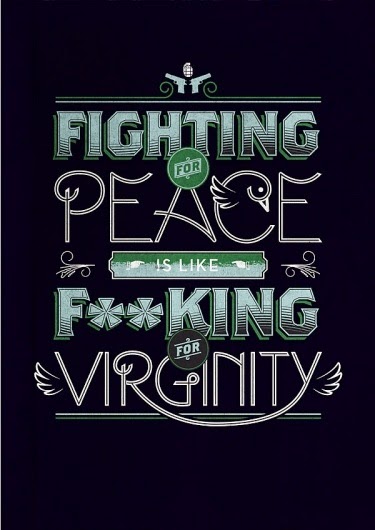 Throughout all history, wars and invasions are bloody and plentiful. The Empire certainly played a part in too many to mention, across all continents. It seems we just cant get enough of shooting the baddies.  Whether the war is any of our business or not is completely irrelevant. Except we, the public, don't want to be out across the globe 'shooting the baddies'. The war on Iraq that lasted 6years, was opposed by millions of UK citizens (the massive march in London in March 2003 showed how opposed people were to this, ultimately, illegal war.) 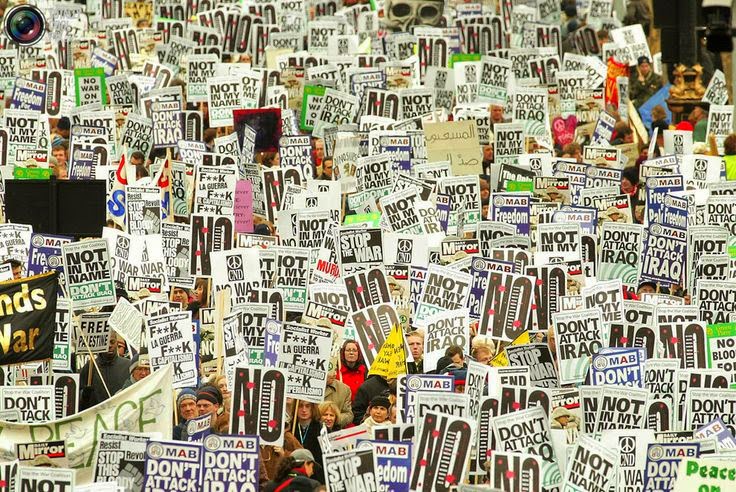 According to the organisers, 2million people were at this London protest

In the past, lands were invaded, wars were fought, fighting for ruling power over the land. In more modern times, specifically in this century, the wars in Iraq, Afghanistan, Libya have not been for land, but for resources. Black Gold.  They have oil, and we, the UK and USA want it. Want it so badly that a culture of terrorism was born and heavily propagated, under the guise of weapons of mass destruction, aka WMD (so called because George W Bush was allegedly unable to say "nuclear") . They had proof. A  smoking gun. That was all they needed to go to war. That, and the horror of 9/11 (there are plenty conspiracy theories surrounding 9/11, government involvement, timing and desire for middle east oil reserves). Needless to say, no WMD were found, 179 British soldiers lost their lives, it cost the UK over £9bn and The Lancet reported that the death toll of Iraqi civilians was up to 650,000 by 2006, from 2003. Was it all worth it?
Tony Blair and George Dubya Bush sent our troops to Iraq looking for nuclear, I mean WMD. They needn't have bothered to go to all the expense (of money and more importantly, of lives) when they could've just nipped along the Clyde - what do they think Trident is!?!
Bush and Blair lied. Thousands died. Now Blair is a peace envoy in the middle east!! Excuse me?? Frankie Boyle put it superbly when he tweeted on 16th June : Personally I don't see anything wrong with Tony Blair giving his opinion on Iraq, its just that he should be doing it at The Hague.

War is a lucrative business. The UK is ranked within the Big 6  ( its chart place generally fluctuating between 3rd and 6th place) countries in arms exports. According to Amnesty International :
The UK's "Key customers include the USA, India, Saudi Arabia, South Africa and other NATO partners. It is also a major exporter to other countries in the Middle East and North Africa, as well as in sub-Saharan Africa.
Generally supportive of strict criteria for arms transfers, the UK has nonetheless supplied arms to countries where there is a substantial risk that they could be used to commit serious violations of human rights. For example, the UK supplied arms to the Sri Lankan government knowing of its repression and UK national legislation is being reviewed following evidence that the UK supplied small arms, ammunition, munitions and armoured vehicle equipment to Libya under al-Gaddafi as well as small arms to Bahrain and law enforcement equipment to Yemen."

So what difference would an iScotland make? Well, we won't be charging head long into illegal wars for a start.  When the vote to go to Iraq was put to the House of Commons the majority of Scottish MPs objected to going to war. Incidentally, Alistair Darling was not one of the objectors, neither were Douglas Alexander or Jim Murphy ( but they do object to indepedence).  An article from Newsnet 16.03.13 reported :
"In an opinion poll published shortly before the invasion, more than two thirds of Scots said Westminster should consult the Scottish Parliament before taking part in military action against Iraq, and 65 per cent would oppose military action if it were carried out only by American and British forces.
The war proved massively unpopular with public opinion.  An anti-war march in Glasgow on an international day of protest on February 15 2003 was attended by between 50,000 and 100,000 people.  On the demo held in London the same day, over 1 million people took to the streets, the largest political demonstration ever held in the UK."
Looking specifically at the situation in Israel and Palestine happening right now, the UK Government, appear to be focussing their attention on Israel, and the BBC are at it again with bias one sided reporting. Reports of Hamas rockets fired into Israel but not the reality of the  disproportionate counter attacks via ground and air strikes on the Palestinian population (80% of which have been innocent civilians so far).  The UK Government making decisions, when the Scottish Government, in particular, the First Minister, has condemned Israel and the oppression the Palestinian' are living with, on numerous occasions.  There are many protests happening around the UK tomorrow, one in Edinburgh and one in Glasgow for support for the Palestinian population 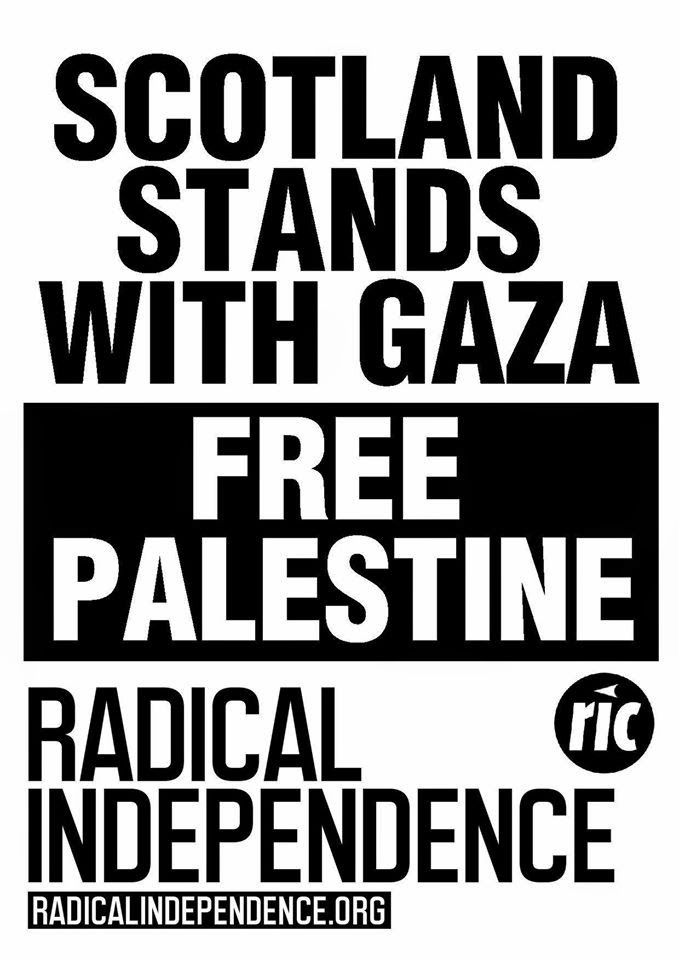 An iScotland is looking at more of a peace-keeping mission when it would be invited into other countries. Not going where the money is, or where big pals in the States want to go. The vision for iScotland includes social justice, democracy, equality and providing the best possible future - I don't see that happening with the continuation of war after war, illegal or otherwise.

Oh, but wait....if we are promoting peace and peace keeping missions, we wont be able to glorify the horrors war (without the reality that our service personnel actually endure when out on tour in active duty, and the support they receive once back home on civvy street), through Armed Forces Day. Lots of kids with face paints and waving flags. Yes, of course show support of the soldiers/the forces and all that they do, all that veterans have done/achieved/survived, pay respects to those who have passed away, but don't let the powers that be, who send our soldiers into illegal wars, feel like they are the Don, because, it is just their PR stunt. A great family day out, to detract from why our soldiers are out in the first place. (I know that our military personnel do more than go to war, but the topic of this post is war, not the different functions of the military as a whole, hence the relevance to the negative connotations towards the PR Spin on Armed Forces Day.) 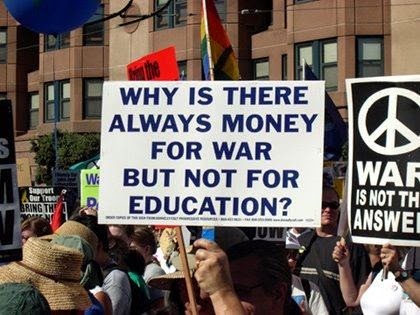 The only war I believe we should be fighting, is the war on poverty. Which could be fought and won several times over, with educating people and giving them the skills they need to get out of poverty, with the budget that is given to paying for illegal wars in other parts of the world.

I Love You Day 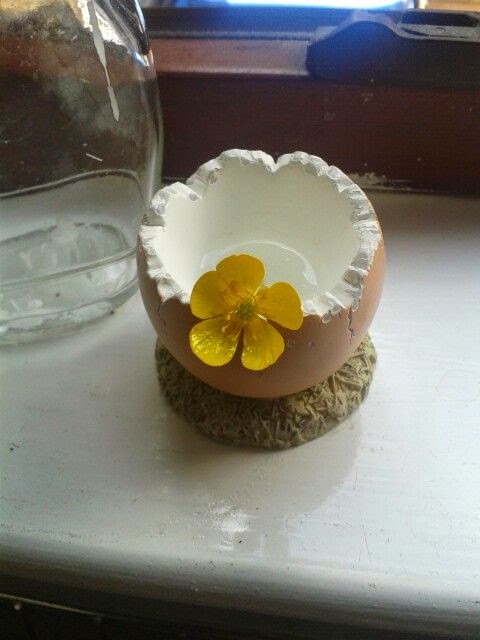 "I need to go outside for a minute, mum"
"Why?"
"Can't tell you, its a surprise."
"Eh?"
"I need you to open the door, pleeeeeeease!"
"Ok, I'll come too, I..."
"NO! Just wait at the door!"
Flies out the front door and out to the back green, returning 30 seconds later, with a big grin and his left hand behind his back.
"I picked this for you mum, because its I Love You Day"
Buttercup presented with a big hug.
My beautiful buttercup is now sitting pride of place on the kitchen windowsill in an egg-cup 'vase'.

Its all the little details that make this thing called Life, ever so wonderful.