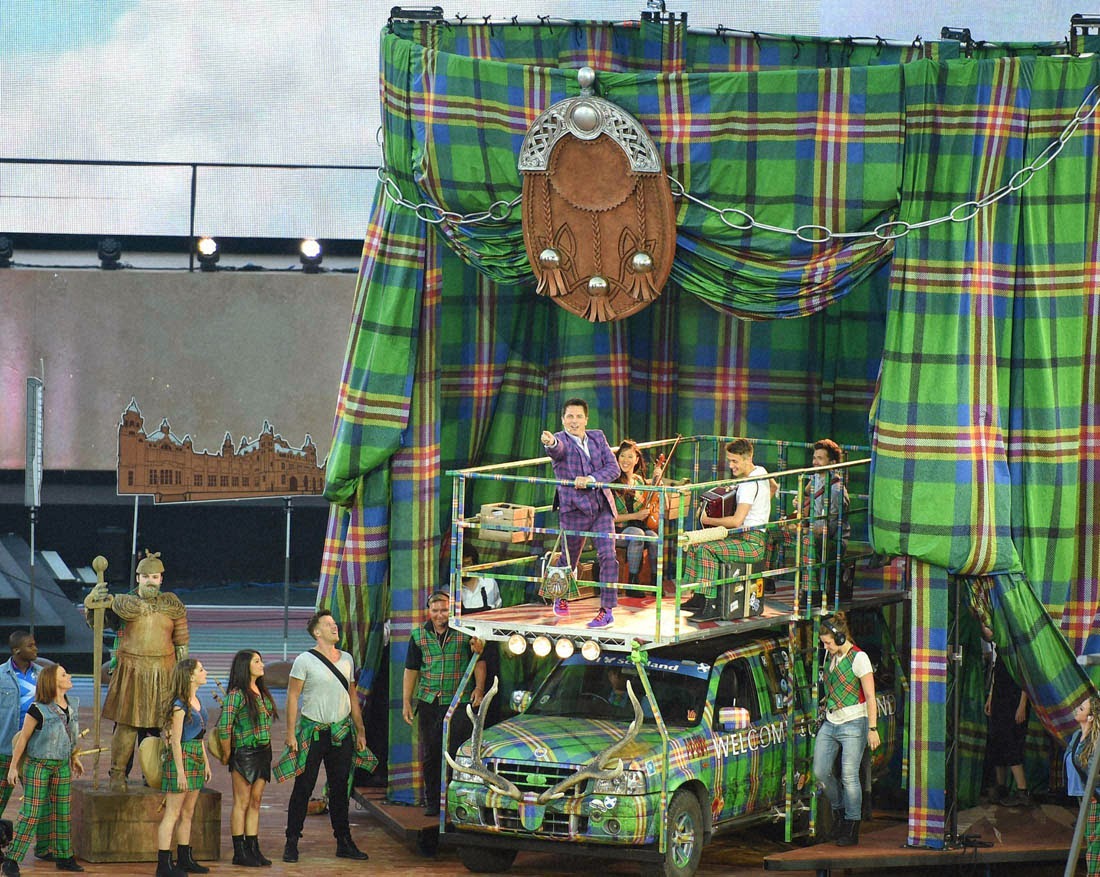 Cultural, tongue-in-cheek, self depreciating, stereo-typical piss take or ultimate cringe-fest? The nation is once again divided.
The opening ceremony had courted controversy regarding its content, earlier this year, when it was proposed that the Red Row Flats, in the North East of Glasgow were to be demolished, live around the globe, to an audience of around 1billion people. The Red Row Flats are currently home to asylum seekers, but were previously built to rehouse those displaced from the inner city slums of the tenements.
It was viewed to be a great idea for the 15 second demolition of the remaining flats, to be used as a source of entertainment, under the guise of celebrating Glasgow's regeneration and looking to the future, whilst the residents of 900 nearby homes are temporarily relocated. Yes, lets show the world that we will move asylum seekers elsewhere so we can blow up their homes, and encase it in a celebratory bubble of positivity and hype. Thankfully this abomination of an idea was served short shrift, and this was no longer the image of our country that was to be portrayed.
Instead, we got John Barrowman (you know, the bloke from Glasgow with the Tom Cruise smile who talks with a better American accent than Lulu, but switches to the broadest of Weegie as soon as a Scottish telly camera is on him? He who lives in London and has a home in Wales, has no vote and is a staunch No Thanks/Better Together supporter). We get the full panto extravaganza, crammed full with every possible stereotype that depicts Scotland, well, except for the Buckfast jakies and smack junkies, that we are also known for, in a caricature of naff tartan shortbread tin tweeness. It was all a bit Royal Mile tourist shop, magnified.  They only stopped short of See you Jimmy bunnets and a rendition of Fandabidozy by The Krankies (although I have to confess, this was a particular favourite childhood song of mine). It was 10 minutes and 28 seconds of sheer Scottish cringe, and 10 minutes of my life I will never get back.  Unfortunately, I made myself watch it again on iplayer, just so I could try and decipher what John Barrowman was actually singing. Perhaps if he'd stuck to his American voice, I would have understood him better the first time, and spared my ears and een the additional torture. For anyone who did not watch it, once seen, it can never been unseen.....The lyrics are actually quite witty and fun and true. Its just a pity they were lost in a sea of Tunnocks Teacakes. I am very disappointed that Gudrun Ure wasn't there as Super Gran, and my updated theme tune was not incorporated into the festivities! Humph!
I will however, applaud one element of the debacle - the kiss! 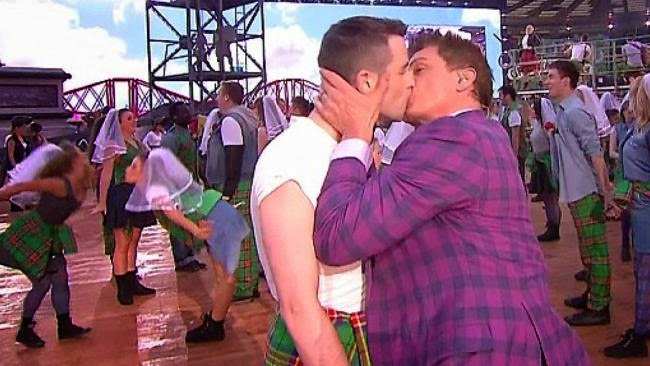 Groom- groom kiss in 'Gretna', was particularly poignant, due to homosexuality being illegal in 42 of the Commonwealth countries (yet there was a boycott of the Sochi Olympics due to Russia's stance upon the same issue.  In some of the Commonwealth countries, homosexuality is punishable by death, and 3years imprisonment for people who know of homosexuals and fail to report them!!!). This deserves credit and will hopefully be well remembered.
The rest of the opening ceremony was filled with highs and lows.
Highights include :
Amy Macdonald and the people of Glasgow. This was excellent.
The dancers - they must've been knackered.
Calvin Harris remix for the section of preparing the stage for the athletes.
The wee Scotty Dugs!!!!!! Stroke of genius.
The athletes parade - the look of joy, delight and pride upon most of their faces.
The feeling and reception the Scottish team received when they came out, and to be honest, their awful outfit of bad socks and crimpolene look frocks on a hot sweaty evening, didn't look as bad as I thought they would.
Ewan McGregor (No supporter -although he is an ambassador for Unicef, so his presence may be condoned on this occasion, and he is handsome so I really don't mind his coupon on my telly) and James McAvoy.
The South African signer, Pumeza Matschikiza's beautifully sung, Freedom Come All Ye. 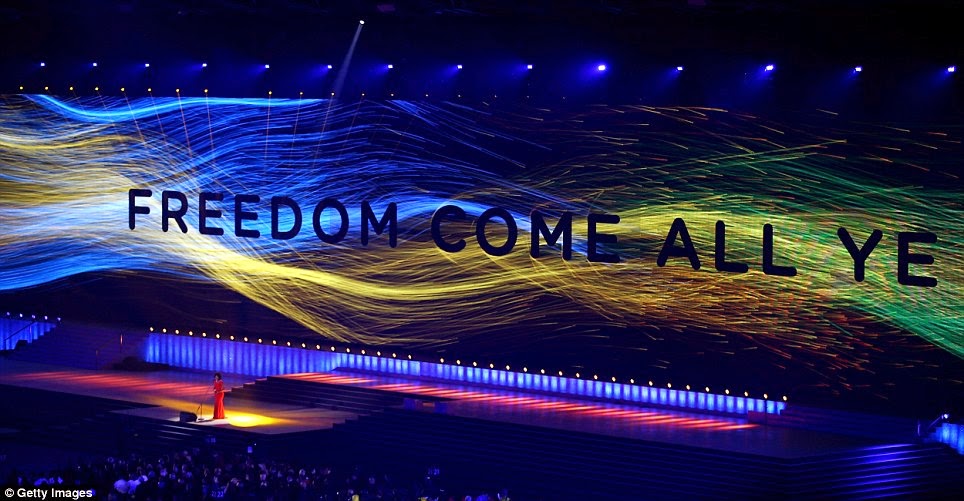 Nicola Benedetti playing Bonny Banks o Loch Lomond on the violin.
Billy Connolly's videos about history of Glasgow and Scotland.
The Gaelic song "Song Thrush", that accompanied the Baton into the arena, sung by Julie Fowlis, so haunting and goosebump inducing, with the lyrics which translate to  "...If every other bird praises its own land, then why should not I. Land of heroes, land of poets, of hospitable, generous land of plenty".
Sir Chris Hoy receiving the Queen's baton from his 97 year old uncle. That made me cry. Beautifully touching  moment.
And of course, nothing says Glasgow quite like the Duke Of Wellington with the traffic cone perched on his head. 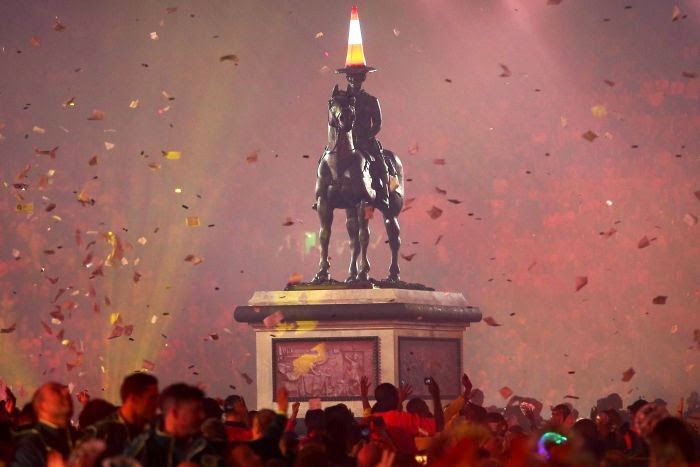 Lowlights include:
The reminder that this is not a chance for Scotland to make the games 'political'.
The initial opening Cringe-fest.
Rod Stewart (No supporter, not actually a Scot, his granny was).
Susan Boyle (another vocal No voter).
Some bloke singing (and really over enunciated) "The National Anthem". This was condensed to only the first verse. Even the BBC didn't deem it appropriate for him to sing the line about "rebellious Scots to crush", seeing as the Commonwealth Games are being held in SCOTLAND.
The wee hand held flags displaying the Saltire on one side and the Union Jack on the other.
The Red Arrows flying RED white and blue.
Unicef highlighting the plight of children across the Commonwealth who are in poverty and dying. All videos from abroad, but what about the plight of children, here in the UK, in Scotland? A quarter of ALL children in Scotland are living in poverty. Showing some of our poorest and most vulnerable children would NOT show Glasgow in a positive light, but we are part of the Commonwealth too.

What did the opening ceremony show, in the end then?  After the initial technicolour tartan horror, it was an evening of celebration, joy, national pride and excitement.  But all anyone will remember, will be the heavily diluted version of Scotland (or should that be a polluted version of a modern Scotland) of the opening and that the spirit of Team GB is alive in The Commonwealth Games. What do you mean, there's not a Team GB? Oh yeh, its not the Olympics, it is team Scotland, competing in Scotland, against  (with the exception of our fellow UK members) all other independent countries, who were once ruled by the UK.

Come on, vote YES, and in the future we can show our country off with best she has to offer, with modern achievements reflecting modern Scotland, and with our own entertainers who live here (not John Barrowman and Rod Stewart), and never again, have to sing "God Save the Queen".