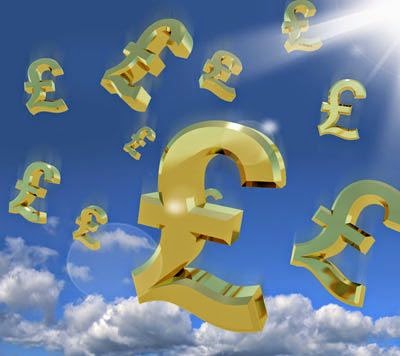 Back when I was a NO voter, and the issue of currency was raised, I remember questioning it on Facebook, and made a smart-arsed comment along the lines of Alex Salmond wanting his Indy cake and a few extra slices of the best bits from the rest of the cake trolley, too. Sterling being one of them.
A friend then enlightened me as to why Alex wanted to keep Sterling. Its as much ours as it is the rUK's. I had no idea (had never even given it a singe thought) that when Scotland joined the Union 300 odd years ago, our monies merged too. Therefore, true, the pound is as good Scotland's as it is Enlish/Welsh or N.Irish.
Now, the whole hooha surrounding whether or not we get to 'keep the pound', is a major deciding factor for many a voter. Possibly THE biggest decider for many. Personally, I couldn't care less if we keep the pound or use peas, beans and glass Barrs bottles for currency. Ok, slight exaggeration, but the actual currency to be used is less significant to me than the reality of how it is used and managed. But that's just my opinion, and it is most definitely not shared by the majority.

So what is the issue surrounding currency? George Osborne hell bent on his refusal for a shared currency. Alex Salmond hell bent on keeping it.
After trawling through endless articles, here's a quick, good old-fashioned pros n cons list:

Pros, the argument for a Sterling currency union : 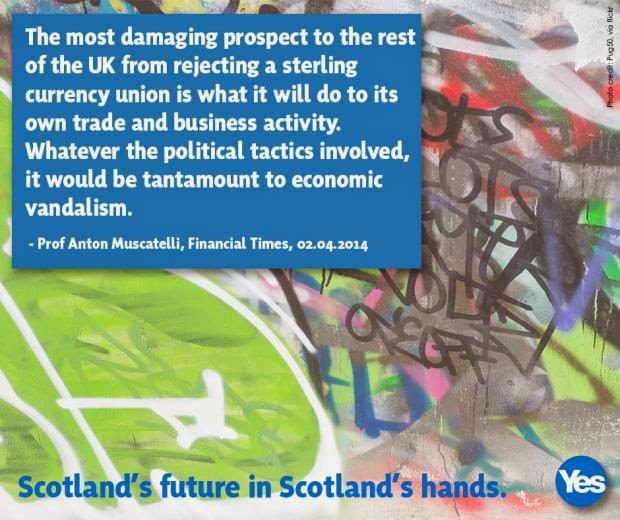 Professor Leslie Young, of the Cheung Kong Graduate School of Business in Beijing, accused the UK Government of relying on a "lurid collage of fact, conjecture and fantasy" in making its argument against a CU.
From the Scottish Government's White Paper, it reports that a CU would be mutually beneficial to both iScotland and the rUK.  The reasons given for this is :
1. It will not only provide a workable currency from day one of independence but also a strong overarching framework for Scotland post-independence.
2. It would promote business certainty, reassuring businesses on both sides of the border that they would continue to trade in Sterling.
3. Scotland's natural wealth would make a positive contribution to the Sterling Area economy.

4. The Fiscal Commission Working Group determined that Scotland’s economy is strong enough and sufficiently aligned with the rest of the UK that a separate currency would not be necessary .
5. Scotland and the UK have been part of a monetary union for over 300 years.  This brings a high degree of integration, trade and economic mobility necessary for a successful CU.


Cons, the argument against a Sterling currency union :

Ed Balls (Labour Shadow Chancellor) and Gideon Osborne (Tory Chancellor)  joined forces and declared that a shared currency union would "create a Euro crisis in spades".
Danny Alexander (LibDem Chief Secretary to the Treasury) and Sir Nicholas McPherson, the permanent Secretary to the Treasury are also in agreement that a shared currency union (CU) will not, should not go ahead, in iScotland.
Jim Sillars (former SNP Deputy Leader) is of the opinion that the SNP's policy on a CU with rUK is seriously flawed. He has stated that "it would mean transferring back sovereign power over Scotland's economy to London".
Martin Wolf, an economic writer with the Financial Times, has said “If I were Scottish, I would not dream of accepting such an arrangement because it would be far more unequal than the present one.” referring to Mark Carney's (governor of the Bank of England) comment that such a union would "sharply curtail Scotland's fiscal and financial independence", due to the difference in size between Scotland and rUK.
For me personally, a shared currency would mean ties with the Bank of England, and that doesn't sound particularly independent. Also, with having a certain amount of control over iScotland's financial situation, would leave us, essentially, as sitting ducks for any taxation increases, changes to inflation that may be detrimental to our economy, etc. This may sound a little cynical or a simplistic revenge plot to teach us a lesson for voting Yes, but with all the threats we've been issued with thus far, I wouldn't rule anything out.

What are the alternatives?
Sam Bowman, Adam Smith Institute's Research Director has stated :
"An independent Scotland would not need England’s permission to continue using the pound sterling, and in fact would be better off using the pound without such permission. There is very little that an English government would actually be able to do to stop Scottish people from continuing to use the pound sterling if they wanted to."
According to a Westminster report, this is called "Sterlingisation", and would be an option to the Scottish Government as sterling "is a free floating international currency " but according to the aforementioned report, this is not a credible option as, sterlingisation would not have Bank of England as its central bank (and lender of last resort), nor would it have control over interest rates.
Adopt the Euro. Although - would we want to? Is it a stable enough currency?
Jim Sillars, Patrick Harvey (Co-Convener for Scottish Green Party), Dennis Canavan (Chairman of Yes Advisory Committee) and Colin Fox (from SSP) are all infavour of a Scottish Currency. Barclays Bank have also stated that they believe Scotland's own currency to be a more valid option than a CU. According to Barclays "having a separate Scottish currency would give the “maximum degree of flexibility for policy” and give it the greatest protection from economic shocks. "

Now, I am not an economist, nor do I have much in the way of prior knowledge regarding the financial world and its workings, but, a flexible Scottish currency or a Scottish currency pegged to the pound seem the most sensible to my mind.  The actual ownership of currency is not entirely relevant, given that money and its worth is assessed worldwide in the money markets, in 'the city'.  Currency is currency if people are using and trading with it. Look at Bitcoin or even the Totnes pound - local currency used in Totnes ensuring all local spending stays in the local community.  Surely the most sensible thing to do would be have our own currency, based on the framework of Scottish trade, economy, cost of living expectation, and how healthy the country is at the time of change from the union to independence. A value or base value established for our country, that is nothing to do with rUk and their economy, since we are actually different and have differing strengths and weaknesses,  that we offer to the financial world.

Unfortunately, it looks like it is going to be one of the issues that will NOT be resolved this side of the referendum.  A stalemate. That is despite cabinet insiders saying that there will be a currency union, the party line is still staunchly adamant that we're not getting it.  Its a ploy being used by Better Together to instill a fear of the thought of losing the precious pound, fear of a decreased in our value and worth, fear of being bankrupt. Fear plain and simple. Call it a carrot, or call it a pinata, but the issue of currency is being dangled infront of our noses to either entice us to stay, or encourage us to beat it and burst it and realise that currency is only a part of the whole package.    Alex Salmond, as well as being our First Minister, is also an economist. Surely he would have forecast that the currency issue being such a major contributing factor to gaining the confidence of the voter (especially those who are/were undecided), and would consider another option to just remaining stubborn on his intention to retain the pound?

With or without the pound, we can do this. Of course we can.

As shocking as it is, food banks are becoming a way of life for so many of our citizens.  Our politicians down in Westminster don't care. They keep punishing the poor and vulnerable with their austerity cuts, and are happy to pose for local press, cutting the ribbon at the opening of the latest local food bank.
Last month, a group of musicians got together in Edinburgh, with singer, Darren Docherty, to record Dougie Mclean's 'Caledonia'.
All proceeds from this song are going to support food bank charities in Scotland.

The single is being released on iTunes and Amazon on Monday 27th July 2014 - lets get it to No1 in the charts, and make the politicians sit up and take notice.

I had heard of suggestions to rerelease either the Dougie McLean or Frankie Miller version, in time for the referendum, to make it number 1 then, but this is more important.

Caledonia is a brilliant song, I just LOVE it, and it always makes me smile.

So please, check out the new version, buy it and share the video far and wide.