Yes, the UK is most definitely divided into those who give, and those to take. The "subsidy junkie" culture is alive and well, positively thriving infact.

So why am I so committed to leaving the union, whereby we are so heavily subsidised, that Scotland get so much more than the other 3 countries in the union? When we have to rely on Daddy Westminster to fund our extravagant lifestyle?

Well, lets look at the subsidised projects :
1. HS2 project - high speed rail link from London to the North of England ( specifically Birmingham, but with plans for further expansion (and cost) to Manchester and Leeds) had an initial cost of £25.7bn which has since escalated to £48.2bn. As part of the UK, Scotland has to pay 10% towards the cost of this new infrastructure. That's £4,771m. Four thousand seven hundred and seventy one MILLION pounds. So that people can commute the 200 miles between London and Manchester in 1 hour as opposed to the current 2 hours.
The website http://hs2.org.uk/ illustrates beautifully wonders of HS2 and how it will revolutionise the UK, with employment and strengthen the economy, particularly in Birmingham, Manchester and Leeds. I am at a loss as to how this adds any value to the Scottish economy.
2. The Scottish population is 8.4% of the UK total and generate 9.5% of taxable annual revenue per head, yet we receive 9.3% back for spending.
3. London Olympics 2012 - 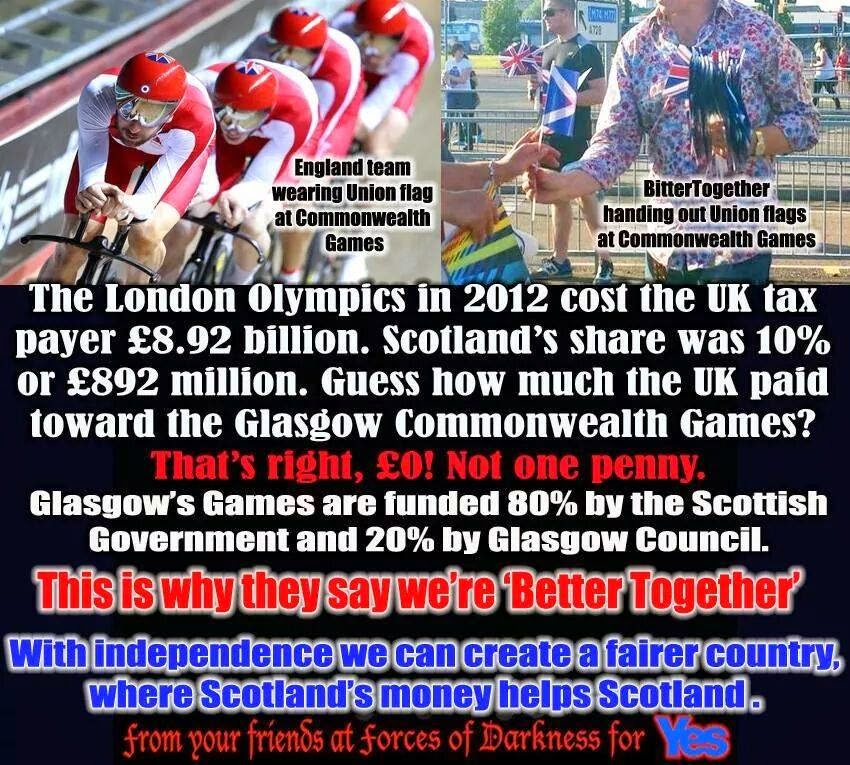 Scotland actually paying more for London than for Glasgow!
4. According to http://www.scotlandscontribution.co.uk/ Scotland is paying £127 per second, on interest o loans that we didn't take out. £4.1bn paid out in interest alone last year. We don't contribute to the debt of the UK, but are paying it back.
5. Business For Scotland has reported the following with regards to Defence :
"In the past 5 years Scotland was charged £15.813 billion in defence costs. However, government figures have found a massive defence underspend in Scotland. Between 2002 and 2008 £5.6 billion less was spent in Scotland than Scotland paid in costs.
Scotland has also paid for one of the largest military budgets in the world while defence jobs in Scotland have been cut by 27.9% across a decade. Scotland continues to face the brunt of UK military cuts.
This year £3.027 billion was taken out of Scotland’s budget for defence. Similar countries operate strong military forces on costs between £1.5 and £2.5 billion a year. Currently Scotland is charged extra costs for a poorer service, receiving only around £2 billion of these costs"
6. Again from Business For Scotland, with regards Admin and Service costs :
"£1.381 billion is subtracted from Scotland’s finances for ‘public and common services costs’. Over the past 5 years £2.1 billion has paid for Westminster’s administration structure – ie. services in the rest of the UK and Scotland.
This includes Scotland’s contribution to the UK’s £3.84 billion tax administration spend, £1.6 billion in UK Border Agency costs and hundreds of millions of pounds for the House of Lords and Commons.
Some of this £2.1 billion will have been spent in Scotland. However, Scotland is subsidising Westminster costs in a number of areas.
One of which is, the UK’s tax administration costs are based on an inefficient model of tax collection. As a result, Scotland has to pay far higher costs than similar countries. Collection costs are 50% lower in Sweden and Switzerland." 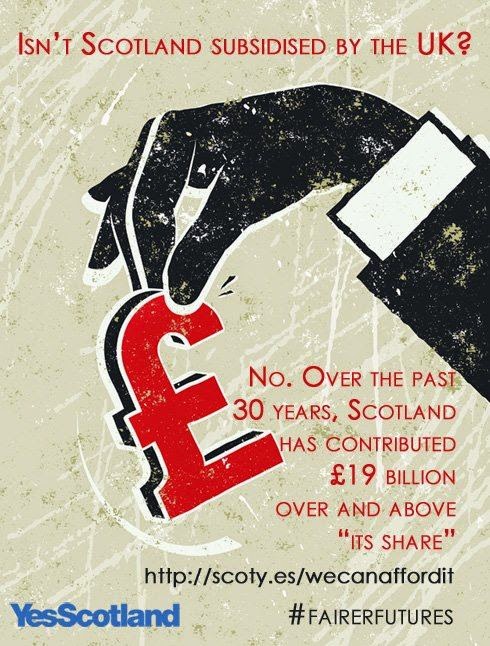 So, I think its fair to say, we have established who the subsidy junkie is, and why they are so keen for us to stay...