Because I have a sense of humour.

The latest offering from Better Together is their Referendum Campaign Broadcast, aka #PatronisingBTLady

If you haven't already seen it, have a gander and let it sink in :


Fab, eh?
I thought it was hilarious! Pure dead brilliant, if you will.
I'm giving it 10/10 for comedy and 1/10 for promoting a positive view of Scottish women.

In a little more detail, lets see what Better Together are saying when they are talking to YOU, the undecided female voter.

Set the scene :
Suburban Stepford Yummy-Mummy enjoying a latte once husband (Paul) goes off to work and kids are off to school.  She sits to enjoy what little peace and quiet her family afford her, and ponders the future, and how on earth to make the biggest decision of her life.
The Plot :
Politics are not meant  to clutter her dainty mind,  the referendum is a dirty word!
Go Paul, go and wash your mouth out, there's some anti-bacterial Carex by the sink. How dare you mention the 'R' word at the breakfast table, infront of the children. Those ignorant children, with Facebook, Twitter, Instagram, Youtube et al, those uninterested children who are more than likely more clued up on the forth coming referendum, than their dear mother, as it is also discussed in schools, where the older classes have been holding their own debates on the subject.  How dare Paul try and engage his family in something far more important, relevant, current and, *sharp intake of breath* intelligent and thought provoking, over breakfast, than what so-and-so did on Big Brother. But then, Paul is the Man of the House, and politics are, of course, a man's thing. How silly of Paul.
How is this busy working mum even meant to find the time to think about the future, never mind actually doing some research of her own - is that not coffee in her cup, or as I like to call it, "awake juice"? Are Eastenders and Corrie too important to miss for a couple of evenings to find out what is involved, could the kids not iron their own school shirts to let her surf facebook, or chat to her about what they have found out?
I wonder if she watched the debate last night, or started to, but tuned out and switched off once it actually kicked off and the heat was on. Maybe if she listened last night, she would know the answer to the currency question, where both Alistair Darling and Alex Salmond said we could use the pound and it was the preferable option to BOTH sides in an iScotland.  That is assuming, of course, that she knows who Alex Salmond is. "That man off the telly", who happens to be the First Minister of the country she is so proud of, and he has been for 7 years now. Oh, silly me, she doesn't do politics! How could I forget, when she demonstrates it so well. Busy mum's are Teflon to politics.
Well, not quite, she is distrustful of political promises, having heard stuff before. I wonder if she was referring to Call-Me-Dave's, election promises of us all being "in this together" or Tony Bliar's reasons for going to work in Iraq. No wonder she's sceptical, I should give her the benefit of the doubt, maybe she has listened to Paul's chat in the past regarding current affairs, whilst setting the table for dinner.
Oil, there's another dirty word. A burden upon our nation. A burden that was been squandered in the past, and where vast new reserves have been discovered and information released about previous finds. Information that she doesn't have enough hours in the day to find out about, but since its not being reported in the Main Stream Media, she is completely oblivious.
Now she's not a daft wee wifey, she is just uninterested in what's happening in the bigger picture, as its not affecting her and her family directly, not right now. She is switched in enough to consider the implications of education, NHS and pensions in the future, but again, she jut hasn't got time between lunches, shoe shopping, reading OK and Hello, housework and watching the soaps, to find out what the implications are and how they are all under threat under Westminster rule. The info is infact really easy to come by if she looks for it.  She wants straight answers, but asks no questions. Maybe Paul could give her some answers if she were to let him speak...?
She wants whats best for her children/future grandchildren (don't we all?), and worries about being unable to change her mind later down the line.  I wonder if she has considered that if she votes NO, she wont be able to change her mind then either, and given that NO other country has EVER asked to come back, once they became independent. Not one!
Her apparent lack of interest in her beloved country, is highlighted with her belief that independence has not been thought through - it's only been on the table properly, since 1979. All the uncertainty that surrounds the issue, her inability to make a decision based on the info she has and the wealth of info she has rejected to source for herself, made it really easy for her to just accept that she is a woman, too busy being a mum and a wife, running a home and a job, that she doesn't have the time/inclination/mental capacity for engaging in the referendum. That she takes the easy out and decides to vote for No.
The conclusion : No real thought, no real information, no discussion on her part, nothing. The fear and doubt has seeped under her skin. This woman is not genetically programmed to make decisions.

Better Together really think that this will appeal to women? I am so glad I have humour on my side, otherwise this could have been taken as the most insulting, patronising, condescending stereotyping of women ever to be recorded. This belongs pre 1950's, in a time when women were mild mannered and ran their homes, and their husbands ran all business and official affairs, such as money and politics.
Unfortunately though, there is an army of women, just like our Suburban Stepford Yummy-mummy in the video, across the country and they have their polling card at home, ready to vote for NO 3 weeks on Thursday.
Come on Ladies! For the love of all that is chocolate, lets vote yes! Who wants to be portrayed as a vacuous insipid stereo typical woman in the biggest, democratic, political life changer in our history? 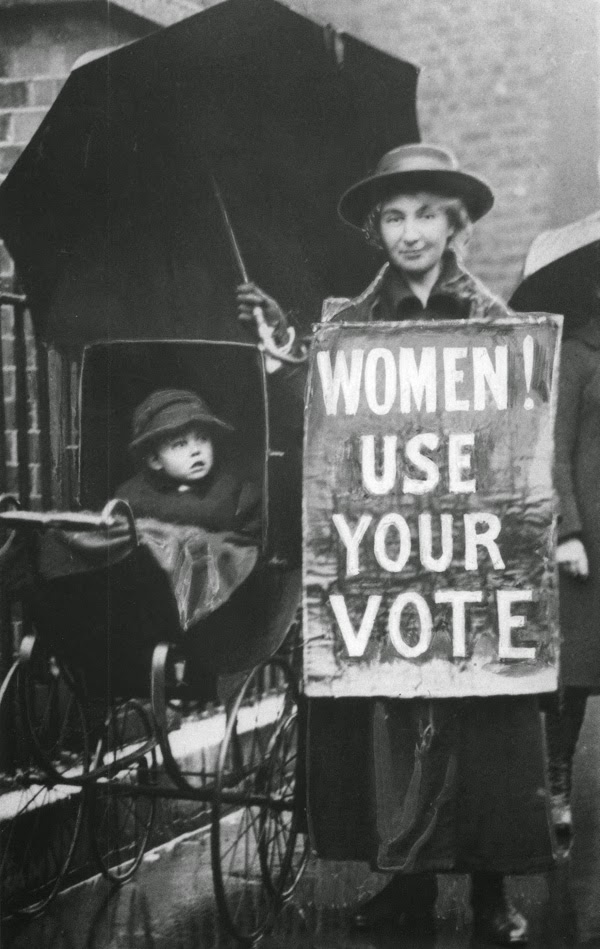 Do we need to be reminded that women fought for our right to vote? That the least we can do is get informed and use that vote for a better life for all concerned, for now and the future?