I love babies. I don't care who is pregnant, as soon as I hear the news, I am delighted for whoever it happens to be, and hope they have the healthy pregnancy and the birth they hope for, to bring their wee precious baba(s) into the world.  I like hearing pregnancy and birth stories,  and love finding out the sex of the infant and the best bit - their name!
And so with todays news that Wills n Kate are expecting baby #2 I am a little torn.  I am super excited for them, but a little sad that they had to announce it early (pre 12week scan) again due to the chronic morning sickness that Kate is suffering with.  I am also a bit cynical and annoyed. Why? Because I have a feeling that this 'wonderous news' may be a 'bandaid baby'. Save the union with the women's vote - aww a wee baby. I wonder if they were somehow 'put up to it' by Granny Liz..? Its all to do with the timing you see. 10 days, that's all we've got left, 10 days - could they not have waited with the announcement? Its all a bit convenient. Kate is not being treated in hospital for her Hyperemesis Gravidarum (chronic morning/all day sickness), but instead from her residential palace, so surely it could have been kept hidden for a mere 10 more days? 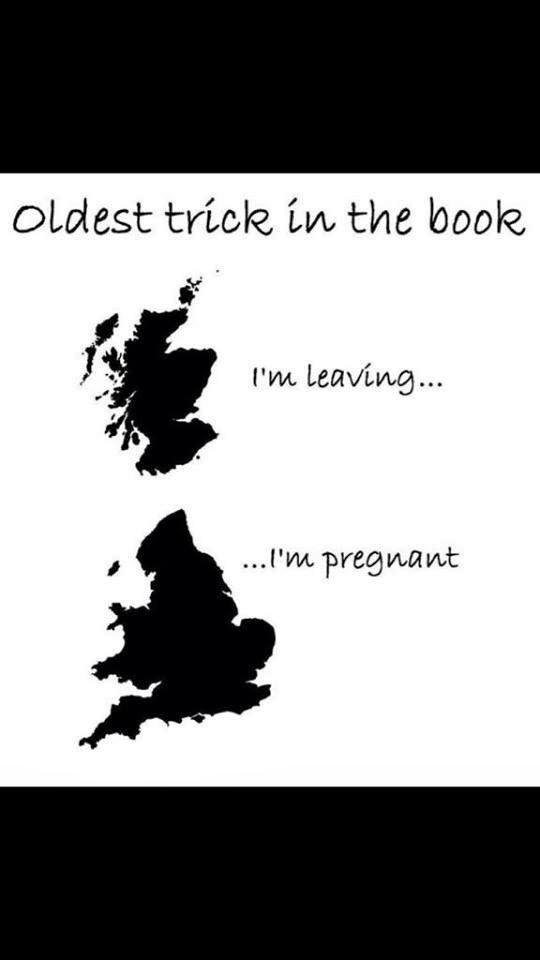 When Prince George was born, I was excited with most of the nation. A wee baby. Not a future King in my mind, but a healthy baby for a happy couple and again, I couldn't wait to find out his name, after getting over the shock that he was a boy as I was convinced he was going to be a girl!
The chances are that this baby will probably never be our ruling Monarch. He'll (or she'll) get to enjoy the perks of being a royal and party on our taxes. During a time of tough austerity measures, are we honestly expected to pay for another baby throughout his life? The regular common subject can expect to have any benefits they are in receipt of, cut and have to pull in belts to meet the cost of living, whilst Prince George has already had £2m spent on refurbing his nursery alone! 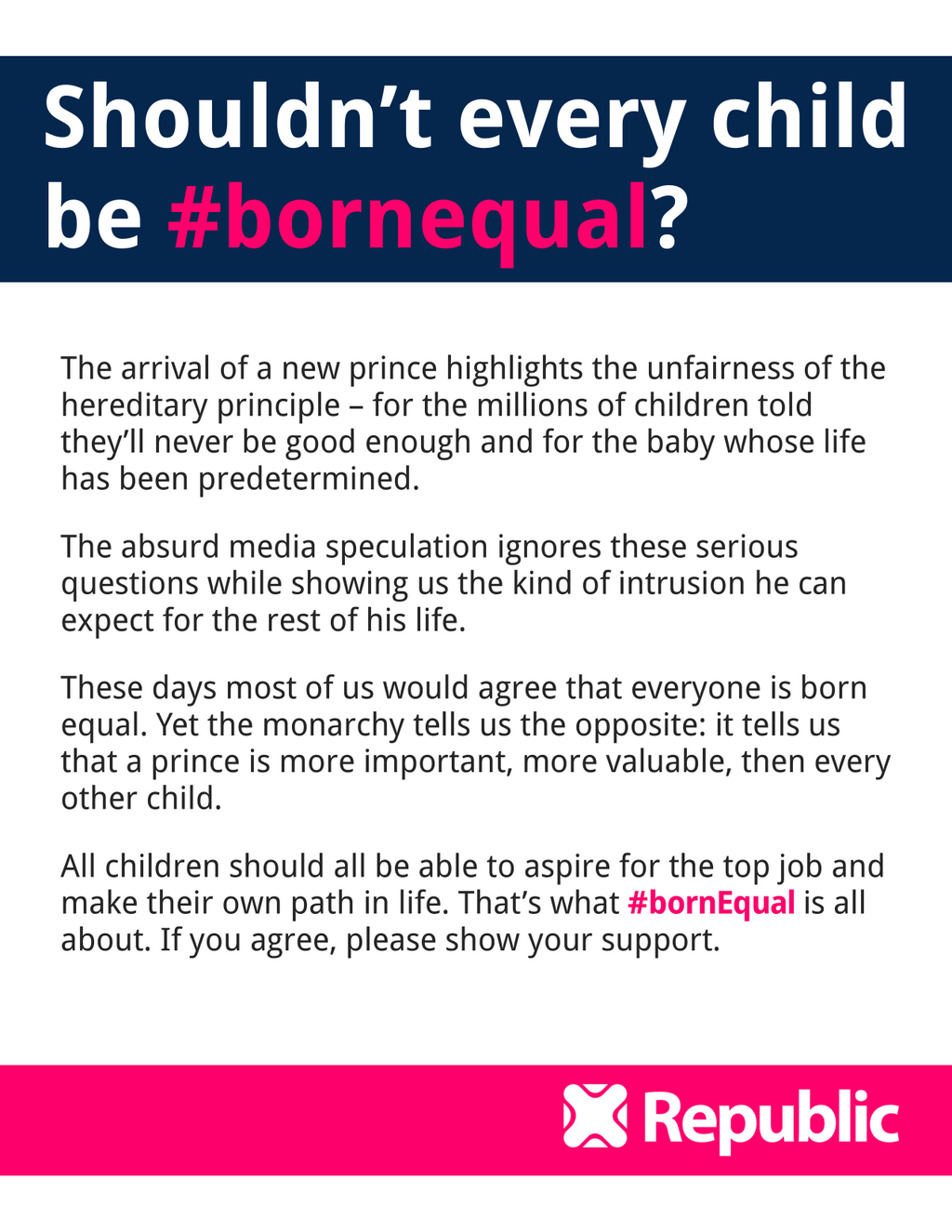 Its not George's or his sibling-to-be's fault that they are so privileged at our expense, they are no better than the rest of us. So why then do we need to continue to pay for them?
I wish Kate and William well and the joys and challenges of parenting that the present and future holds, but one (me, not Her Maj) is not amused about being expected to pay for it.
The news of the royal baby has zero impact on the referendum, and so it shouldn't, but it will be milked for all it is worth over the next 10 days. Altogether under the crown - give me a break!
Congratulations Wills n Kate, and in 10 days time, congratulations to Scotland on the impending (re)birth of our nation. 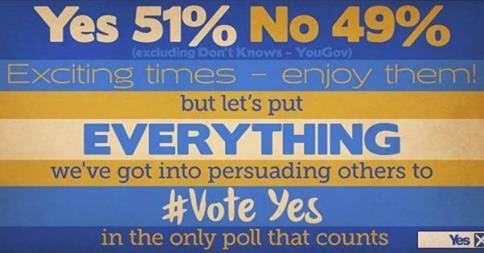 The results came out Saturday night and published in the press Sunday morning. According to the latest YouGov poll (the only poll that everyone, including governments are paying any heed to), the YES side has pulled ahead with a 2 point lead over NO with a 51/49 split. Last week the polls revealed an 8 point jump to only 6% separating the two sides, with NO leading at 53%.
It has taken until this poll for the complacent big wigs in both Westminster and BT to sit up and realise that Scotland is rising up to be a nation again! They (the Establishment) have realised that this shit just got real! And an S.O.S. has been sent out. Rally the troops! Its time to Save Our Subsistence!!!

They never thought we would actually vote for independence, they didn't even give us the option of further devolution on the ballot paper (which in all honesty would probably have won, hands down), just a full in or out, left or right, just nae hokey-kokey. But now, oh now, its all about new powers: pulling together to establish what more devolution (devo max) looks like, with George Osborne on the BBC with Andrew Marr, promising that in the coming days we will see that very plan, of "more tax powers, spending powers and control over the welfare state... more fiscal autonomy, but need to wait and see the proposal in the next few days". Except, its now within the 28 days of the referendum, and no-one can change the conditions of their offer. Or can they?
According to the Statutory Provisions and Edinburgh Agreement : 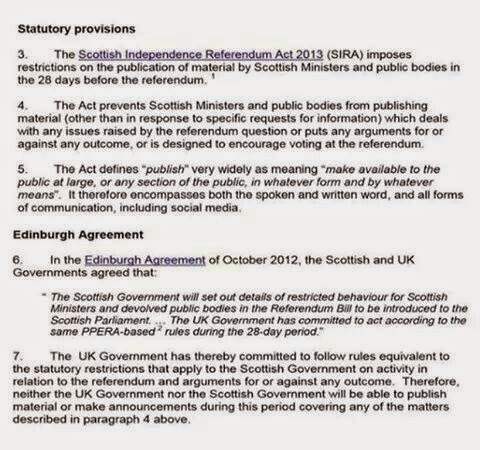 The Electoral Commission published this document  which states that :
"The UK Government is not restricted by the referendum legislation, but has agreed to abide by the same restrictions"
Excellent. The Scottish Government have basically got to keep their mouths shut in response to the new plans being put forward by The Establishment. Whilst The Establishment can renege on their previous agreement to uphold the same conditions, and go into a new promise overdrive. It screams of desperation, underhand tactics, and their full colours are on parade. Scotland is voting for, in part, a fair and just society - shame WM and BT have chosen not to display this trait when the chips are down.  This is, as FM Alex Salmond says, "a last-minute bribe". We won't be bribed into staying. And what about the many (postal) voters who have already cast their vote - this is hardly very honest.

Alastair Darling has refuted comments that they are in a panic and has come back to say with regards to the Andrew Marr interview, is that all George was referring to was the same plans as before, just more detailing of the time-scales.  Oh. Really??  At no other time in the referendum period have the parties got together (publically) to discuss Devo Max - they all had their own version, each declaring what we would get depending which party won the General Election.  Do they really now think we have forgotten that? Do they think that coming together at the coos-tail, we believe that they care about us?  Do they really think that we deserve such commitment of their time and energy, that they leave all serious talks until now? Are we really so 'insignificant' and 'too stupid' that they thought when it came to 18th Sept we would just vote to Keep the UK and Carry On? Were they really that smug and complacent? Why Yes, yes they were.

Do not be fooled though. All the panic and rushing around to bring a new offer to the table is in a last ditch attempt to save the UK - but its not for our benefit, its for theirs. They need to protect their own jobs, the cash flow into the treasury from our taxes, to save face in the eyes of the world - to show The Establishment still has might. They need Goliath to win, not David.

We are prepared for the next week to be ugly, full of lies deceit and fake smiles, PR spin in overdrive - making Saatchi work for his money. We must remain focussed, respectful and not complacent. A 2% lead is not enough, we need to win with no margin of uncertainty. If we let the other side use their dirty tactics, we will come out on the 19th, victorious not just in the referendum vote, but also with our integrity in tact.