Behold, the Saltire is flying above Westminster (despite its very own anarchistic rebellion) and tomorrow we await the arrival of the 4 (well 3 in physical presence) Horsemen of the Indyrefalypse! 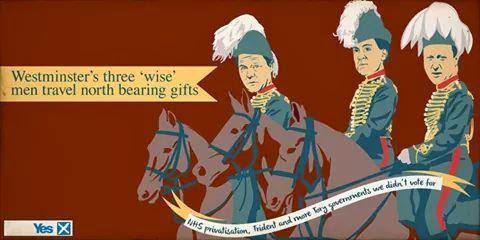 The new dawn heralds the arrival of David Cameron (Conquest - in power despite being unelected), Ed Miliband (War - his party took us into illegal wars), Nick Clegg (Famine - rise of the food banks and austerity measures) and bringing up the rear, the forth, the symbolic Death (death of independence for ever - at least in our lifetime).
They are coming to Scotland to support Project Fear, foretelling tales of woe should we break free, with the impending sense of doom they so willingly share, the lies and deceit told and retold are so well-rehearsed and repeated so often, it's as if they believe it themselves. Their stories have almost become folklore in their own right. However, their reason for wanting the union to remain intact, is very different from the No voting Scottish public, be under no illusion.
And  if they fail tomorrow, we have Nigel Farage coming up on Thursday...

Alternatively, they may be viewed as JK Rowling's 3-headed dog guarding the Philosopher's Stone (aka our independence) from Harry Potter, who was based on Cerberus, the 3 headed dog in Greek and Roman mythology.  Cerberus guarded the entrance to the underworld, where the dead could not escape nor the living enter. This is very similar to our situation now - the Con/Dem/Lab uni-party guarding our chance of independence with all their might. The panic and realisation that this isn't Scotland taking a huff; this is real, has sent their adrenaline surging like heroin through their veins and they are feart. Fight or flight has finally (its only taken how many years??) kicked in and they are ready to fight, to the end. But just like Fluffy (from Harry Potter) and Cerberus, you have to know the beast's weakness, its achilles heel.  And fortunately we do - the grassroots movement of the YES campaign. Armed with information, passion, and nae fear!

Both analogies share  a commonality - the presence of fear. But we're not scared. The WM Juggernaut is no more; its lost its power, its credibility, its security.  It is however, the architect of its own downfall. The complacency it has shown throughout the indyref campaign period and the contempt for the Scottish voter has been countered by the recent polls.  They will only have to look at the windows and cars they pass, to see the mounting support, and proud support for independence.

I doubt very much that what they say in the coming visit will sway anyone, its just a little bit 'too little too late'.