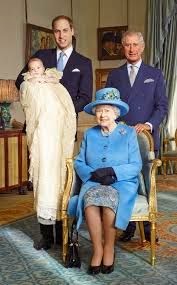 The plan for iScotland in both the White Paper and the interim constitution, is to keep the royal family, with the monarch, currently Queen Elizabeth II, as head of state (although, should she not be Queen Elizabeth I of Scotland? Queen Elizabeth I was Queen of England and Ireland from 1558-1603, and the Scottish monarchs during that same time period were Mary I, Queen of Scots, 1542-1567 and James VI, 1567-1625).
Some people consider the monarchy to be old fashioned, parasitic, a drain on our finances, a privileged lot to whom we are all subjects and therefore they have no place in modern society.  Others love the Queen and her brood, they support the charity work the royals do and the tourism they generate.

What I want to know is, do the royals still have a place in an iScotland?
Technically yes they do; a couple in fact. Balmoral - holiday home and private residence which is actually owned by the monarch and not the Crown Estates, and the Palace of Holyroodhouse (more commonly known as Holyrood Palace) - the Queen's official residence in Scotland.
There are also the 'un-occupied' properties which are: Dunfermline Castle, Edinburgh Castle, Castle of Mey near John O'Groats and Stirling Castle.
The Queen's property portfolio is worth £9.9bn, which last year (according to CityAM) generated returns of £267m.  The report by Billy Ehrenberg on 26th June 2014, states that :
All rents from the property portfolio are paid to the Treasury, from whom the Queen receives living and household maintenance expenses. The sovereign grant was £37.8m for 2014.
As all revenue from the Crown Estates are paid directly to the UK Treasury, the SNP called for devolution of Crown Estates income in Scotland back in 2011. Michael Moore (Secretary of State for Scotland, in the Scotland Office at Westminster) decided not to devolve this and not split up the Crown Estates. Since then, (from Wikipedia) plans have been developed to allocate some of the Crown Estate income to the Big Lottery Fund, which would then distribute funds to coastal communities. These plans have also been criticised by the SNP.

The cost of up keep of the Royal properties has, according to a report in the Independent in June 2014, "... bucked the trend for austerity and dramatically increased spending on the upkeep of its palaces.
The Queen’s official expenditure from the Sovereign Grant, the amount released from the public purse each year to finance the monarch, increased to £35.7m - a rise of £1.9m on the previous year.
The steep rise included a 45 per cent increase in the amount spent on the upkeep of royal residences, including Buckingham Palace and the Kensington Palace apartments of the Duke and Duchess of Cambridge
Public spending on refurbishing the 20-room central London living quarters of the couple and Prince George has totalled £4.5m over the last two years but royal aides said the cost of internal furnishings, including a new kitchen, had been met “privately” by the duke and duchess.
The Independent understands this cost was in fact met from the income received by the Prince of Wales and his dependents from the Duchy of Cornwall, which critics claim is effectively public money....An aide said: “Some of the fit out we felt should be paid for privately. The Cambridges have been extremely sensitive to the fact that public funds were paying for a lot of this work.”
A source underlined that the resulting accommodation was “not opulent”, adding: “It is done to a very comfortable but ordinary level.”
Now,  I am no financial expert, but anywhere in the region of £millions on renovation and decoration is hardly 'ordinary' and very much 'opulent' in cost if not in style.

The 'cost' of the Queen (via the Sovereign Grant) to the UK last year (2013/2014) was £36m. This financial year is £38 and the following £40m. This may seem excessive as she is in receipt of a 5% increase, while UK wide budgets are being slashed in the name of austerity. But this equates to just 56p per tax payer, which doesn't seem much, especially considering that the MPs in Westminster received an 11% pay rise this year and have now released a forecast pay rise of 10% for next year (they are so good to themselves), whilst common subjects are lucky if they receive 1-2% pay increase over the last couple of years.

So what is she spending her millions on?
The majority goes on the household bills - utility bills (the cost of which would cover the energy bills of 2,288 British homes), laundry, staff wages, luxurious and ostentatious parties, I mean, official functions, with an annual food bill of an eye watering £1.3m.
The cost of maintaining her residences come in at £13.3m.
However, even the royals are having difficulty managing their household budget.  Where as the common subject has to cut their cloth accordingly, or face the bailiffs, Lizzie just keeps on spending!
Her spend increased last year by £2.4m. This is despite Sir Alan Reid, keeper of the Privy Purse, declaring that that funding of the monarchy had fallen.
The Royal purse spreadsheet showed that in 2013 - the amount received in royal purse grant £31m, the amount spent £33.3m.  In 2012 - the amount received was £29.1m, the amount spent was £32.4m.
Chief Executive of (campaign group) Republic, Graham Smith, said : “An increase of this magnitude when everybody is dealing with cuts is frankly beyond belief. I think many people will struggle to comprehend how spending of this nature can be justified. It appears very much that the royal household believes it can get away with spending what it wants.”

Defenders of the Queen and monarchy argue that despite over spending on budgets and being at the polar opposite end of austere Britain, the sovereign is (according to the Express) "worth her weight in gold". According to their report, the crown estate generated £267.1m in profit, all of which goes directly to the treasurer. Last year this was an increase of 6%, and apparently justifies George Osborne's generous rise in the Sovereign Grant.

All of above is in relation to the Queen and the Queen alone. What about Charles? (Never mind all the minor royals too.) Charles 'income' comes from the Duchy of Cornwall which according to the official website, is a private estate which funds the public, charitable and private activities of the Prince of Wales and his family. It also allows the PoW to have a separate income from the monarch.
In the financial year 2012/2013, the Duchy of Cornwall's profits rose by 4% to £19m. Due to the Duchy not, however, being a 'corporation' it doesn't have to pay corporation tax.

Ok, enough about the financials. Its not all about the money (eh, Jessy J?).  What about the news from 2011 reported in the Independent, that the Royals, specifically the Queen, Charles and William, were to be granted new rights of secrecy?  Obviously over 3 years have passed since this article was first published, but do we know if these rights were granted? Or to what degree.
Essentially the rights to which it refers are  (1) Absolute protection from public scrutiny and (2) communications relating to Liz/Charlie/Wills no longer to be disclosed, regardless if in public interest.
The report states :
"Sweeping changes to the Freedom of Information Act will reverse advances which had briefly shone a light on the royal finances – including an attempt by the Queen to use a state poverty fund to heat Buckingham Palace  (apparently she requested and was refused a poverty handout in 2004, as the £60m energy-saving grants were for families on low incomes) – and which had threatened to force the disclosure of the Prince of Wales's prolific correspondence with ministers."
Ian Davidson, a former member of Parliament's Public Accounts Committee (PAC), told The Independent: "I'm astonished that the Government should find time to seek to cover up royal finances. When I was on the PAC what we wanted was more disclosure not less.
"Every time we examined royal finances we found extravagance and indulgence as well as abuse of expenses by junior royals.
It is believed that the one pushing for this change in legislation, is Prince Charles.  Not surprising really, as he is known to be particularly politically vocal, whilst maintaining an air of neutrality. Mr Maurice Frankel, head of Campaign for Freedom of Information, said :"The heir to the throne has written letters to government departments in an attempt to influence policy. He clearly does not want these to get into the public domain."

And for something a bit more up-to-date : the Scottish Indyref - Should the Queen get involved?
The Queen has remained silent on the subject, indicating her impartiality. However, there is a growing pressure mounting from some of Westminster, to come out and make a stand for the union, like she did during her Silver Jubilee speech, in 1977, when she said :
“I cannot forget that I was crowned Queen of the United Kingdom of Great Britain and of Northern Ireland. Perhaps this Jubilee is a time to remind ourselves of the benefits which union has conferred, at home and in our international dealings, on the inhabitants of all parts of the United Kingdom.”
A spokesman for Buckingham Palace has said :
"The Sovereign's constitutional impartiality is an established principle of our democracy and one which the Queen has demonstrated throughout her reign.
"As such the Monarch is above politics and those in political office have a duty to ensure that this remains the case.
"Any suggestion that the Queen should wish to influence the outcome of the current referendum campaign is categorically wrong. This is a matter for the people of Scotland."

Another thing about the monarchy and their ruling over Scotland, is that is it nothing really to do with the referendum.  Scotland  and England united crowns in 1603, a whole 104 years before the formation of what we call the United Kingdom.  So what then am I doing writing about the future of the monarchy in iScotland? The personal view that I hold is that with indy, we are making the decision to hold our own country accountable to its citizens, to create a more fair and equal society for all, and to ensure better standards of living for all. The monarchy represents the exact opposite of that- firstly that we are not citizens but subjects, it is all pomp and extravagance, wealth and privilege not gained through hard work and self effort, but by fortunate birth, it is grotesquely unequal, considering how many people are living in poverty - working and living in poverty whilst the royals jet around the world visiting 'important people' in the name of charity, tourism and international friendship.  Scotland doesn't need to be ruled by unelected royalty, our tourism industry is wealthy without royal tourism (not that we get a penny of it currently anyway), but if they started paying for their luxury crumbly castles into our treasury that'd be just awesome.
First independence, then republic.


Source of information (if not already acknowledged above):
http://www.theguardian.com/news/reality-check/2014/jan/28/how-much-do-the-royal-family-spend-and-are-they-down-to-their-last-million
http://www.dailymail.co.uk/news/article-2364231/Prince-Charles-paying-lower-rate-tax-servants.html#ixzz3CwC9Ezp1
Posted by Lissa at 15:33 No comments: