This film is absolutely fantastic.
Scotland Yet :  a film about independence 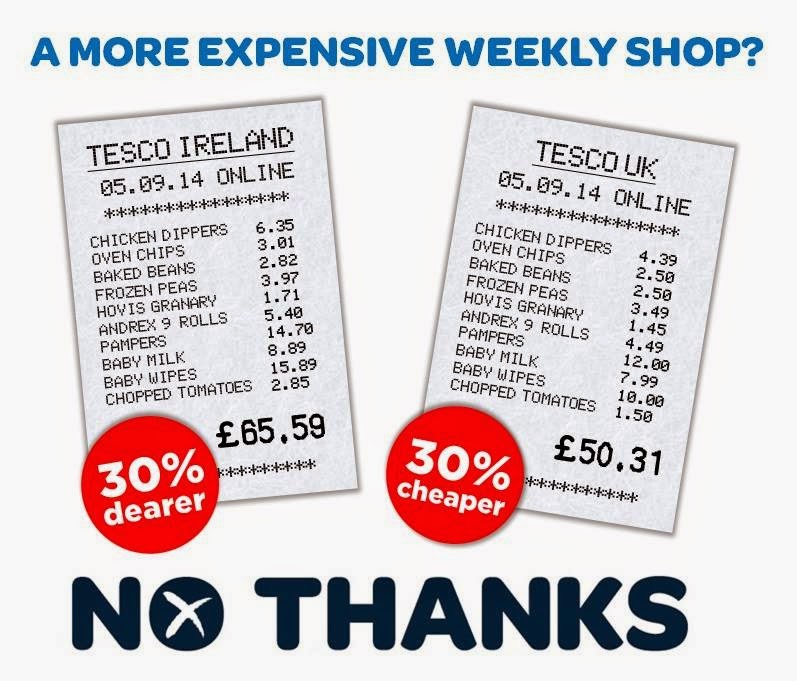 We have been hearing for some time now about how supermarkets will have to increase the cost of our weekly messages in the event of a Yes vote.
We have been told that the cost of distribution to stores will increase, the cost of setting up a new company in a foreign country, the cost should there be a completely different currency.
It has been reported that the PM David Cameron has had 1-2-1 chats with executives of the leading supermarkets in Downing Street, regarding the implications of independence and urging them to support the union.
Robert Peston (British economist) tweeted that David Cameron "met supermarket bosses at No.10 this afternoon and urged them to go public on how prices would rise in and independent Scotland."
This is the very same Prime Minister who repeatedly states that he is not getting involved with the referendum as it is a matter for the Scots.

Asda and John Lewis (owners of Waitrose) has came out to say that prices may increase, as any extra costs incurred dealing with iScotland would have to be passed onto the consumer. Since his chat with Dave,  Asda CEO Andy Clarke said: "If we were no longer to operate in one state with one market and - broadly - one set of rules, our business model would inevitably become more complex. We would have to reflect our cost to operate here.
"This is not an argument for or against independence, it is simply an honest recognition of the costs that change could bring. For us the customer is always right and this important decision is in their hands." When only last week Asda were saying that they had no plans to raise prices in iScotland.
John Lewis chairman Sir Charlie Mayfield warned ""From a business perspective there will be economic consequences to a Yes vote, not just in uncertainty but some of the turmoil we are hearing about.
"And it is also the case that it does cost more money to trade in parts of Scotland and therefore those hard costs, in the event of a Yes vote, are more likely to be passed on."

Meanwhile Tesco and Morrisons have actually said the opposite. In the Huffington Post, it reported that  Morrisons have said it was "wrong" to say they were planning to hike food prices, with a spokesman telling Newsnet Scotland: "If an independent Scotland increased or decreased regulation or taxes we'd have to take a second look at our pricing. Clearly that could work for or against Scottish customers depending on the direction of travel."
When contacted by a member of the public (and then published on Face Book), a Morrisons representative is reported as saying:
"Thank you for contacting us regarding the leaflet you received.  We have received similar enquiries regarding this articular correspondence from one of the campaigns in the Scottish Referendum.  As a company Morrisons have a thriving and loyal customer base and we work to try and keep those customers satisfied.  We base our pricing on the retail MARKET and not on political decisions. We strive to offer customers in Scotland the best service we can.
As far as we are aware the increased cost in Ireland is due to a number of factors, the major one being the higher cost of distribution.  Morrisons currently have in place a full distribution network within the current UK which would remain in place in the event of a Yes Vote.  The only way we could envisage an increased cost for Scotland is if the Scottish Government were to push Scotland's land mass away from the rest of the UK and into the North Sea."
And Tesco had this to say 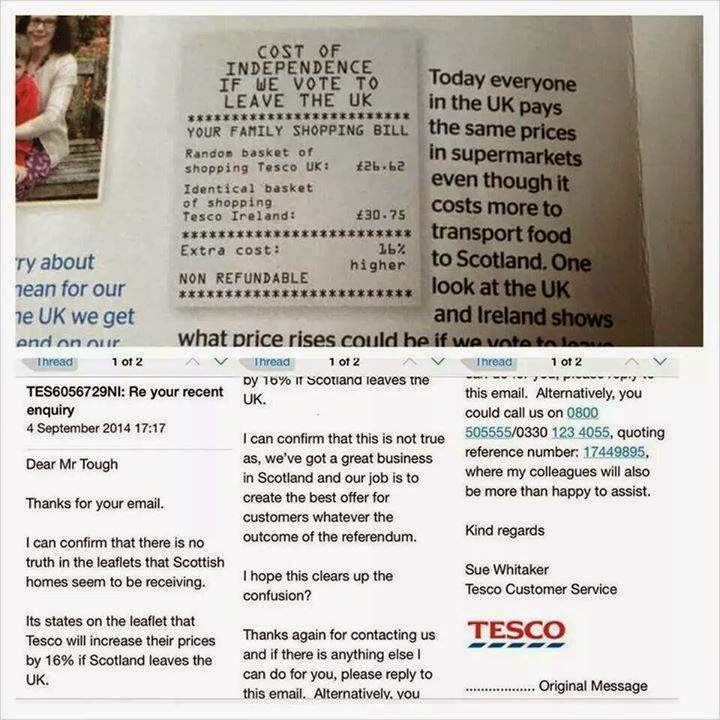 As for the photo at the top of the post, taken from the BT Facebook page - who does their maths? 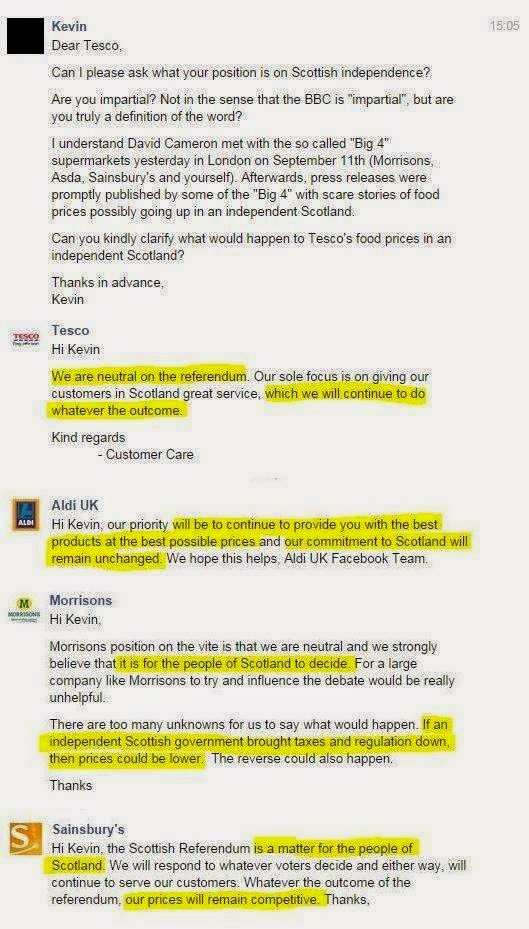 A great article in Business for Scotland reports on the particulars of retailing currently and in the event of a Yes vote and gives a very clear argument as to why the argument against independence in terms of your grocery shopping, is flawed. For example, with new taxation rates in iScotland, prices may actually fall.

From a personal perspective, as a supermarket employee, prices fluctuate constantly. They have been creeping up for a long time, until very recently when Aldi came to town. Good food and great prices - even with my 10% staff discount, I still get the vast majority of my groceries in Aldi, topping it up with the heavily discounted weekly deals in the big supermarket.  Perhaps if supermarket workers were paid more than just above the Nat Min Wage, we wouldn't mind paying a bit extra for food.
I used to enjoy a local veg box scheme and meat ( and soaps and cheese and jams etc) from the farmers market, but these are luxuries I can no longer afford as a way to shop.  My internal moral compass is in constant motion between budget and green credentials of where my food comes from and how it comes to be.  As such we don't eat a lot of meat, but when we do it is of the highest quality and welfare I can get, I try to buy Scottish or British food, and produce that is in season (I do not buy strawberries grown in Egypt in December for instance), but that is my choice. I would love to be able to have a box scheme again, use the local grocer for all meats foods, and have my milk delivered by the local dairy, but it is not viable - especially with the amount of milk we get through each day.
The Common Weal has a plan for a better future, that combines all elements of supermarkets, local co-ops, food banks and local economy, which totally resonates with me, and is the perfect way to balance the situation (from my point of view).  The full details can be found here.

At the end of the day, if Aldi and Lidl (both German companies, trading in the UK and throughout Europe) can have lower food prices and the big four are in competition for the cosumer pound, why should our vote be held to ransom? Yes, prices might go up initially, but all it will take it for one of them to say, "I'm taking customer turnover and loyalty over profit" (ie increasing market share), and then the price war starts all over again, as none of these companies want to lose customers or any more profit than they need to. 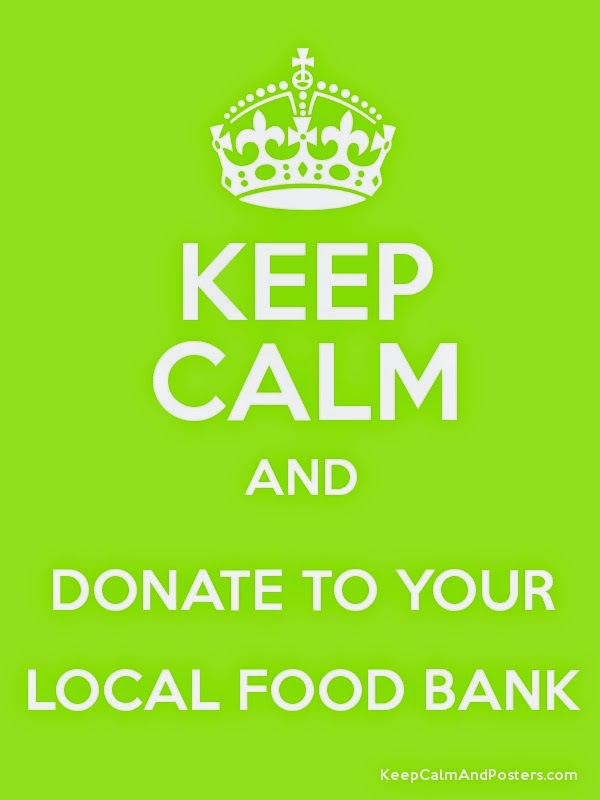 Food banks - the growing phenomenon that is sweeping the UK. In 2013 the number of people relying on food banks to feed themselves and their families TRIPLED in a year, exceeding the expected forecast by over 100,000 people. In terms of figures, in the period April to October 2013, The Trussell Trust (biggest food bank operator in the UK) helped 355,985 people - including 120,000 children, whilst in the same period in 2012, that total figure was 113,264 people.  Last winter, the British Red Cross were also involved in distributing food to British citizens, a first since WWII.

The thing about food banks though, it is not just people who are out of work and living on benefits that are using them - families from working households (known as the working poor) are also in need of these valuable charitable services. In a quick search on the Trussell Trust website, there are 16 food banks within a 25 mile radius of my front door, not including the local run independent/charity/church  set ups - that is a lot of hungry tummies.

How did this supposedly wealthy nation end up like this? Swinging cuts to the welfare pot, extortionate price hikes in energy bills and food bills, big mortgages for owners and the buy-to-let, so therefore rents are higher, just for a kick-off.  Prices going up all around, whilst the wages people are earning are not rising at the same level, if at all - the cost of living far exceeds the wages of the average family.  Many people earn more that the 'average' but I think it is fair to say that they are not the ones trying to feed their families from food banks!  Even worse (if that's possible), are the number of people returning to the food banks to exchange items in their food parcels, not because they didn't like what they were given, but some people have returned items that need heating prior to eating, as they don't even have the money to pay for the electricity bills for a cooker or microwave. Yes these people may be in the minority and in the worst case, but the fact that this is happening at all in wealthy west European country is disgraceful.

Our caring MPs however, need not worry about food banks for themselves, not with the grocery allowance of £165 they receive per week on top of their salaries! These are the same MPs who are happy to pose for the local press as they open another food bank in their constituency. Even more galling, is that some MPs (not going to tar all politicians with the same greedy brush, but there are many which deserve to be) believe that food banks are going to be and should be, the norm!  Of course, why would any country not want their own citizens to be able to support themselves and their families?! 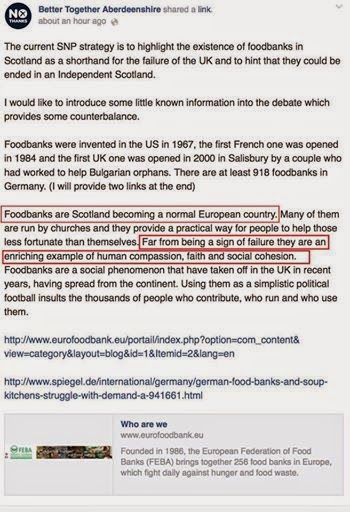 After this post from Aberdeen BT went viral, it was removed, but not before a great many people saw it and spread it.  How anyone can spin poverty into something "enriching" is beyond belief.
Not only that, the our caring sharing MPs in Wastemonster also rejected EU funding to assist those who were in most need: 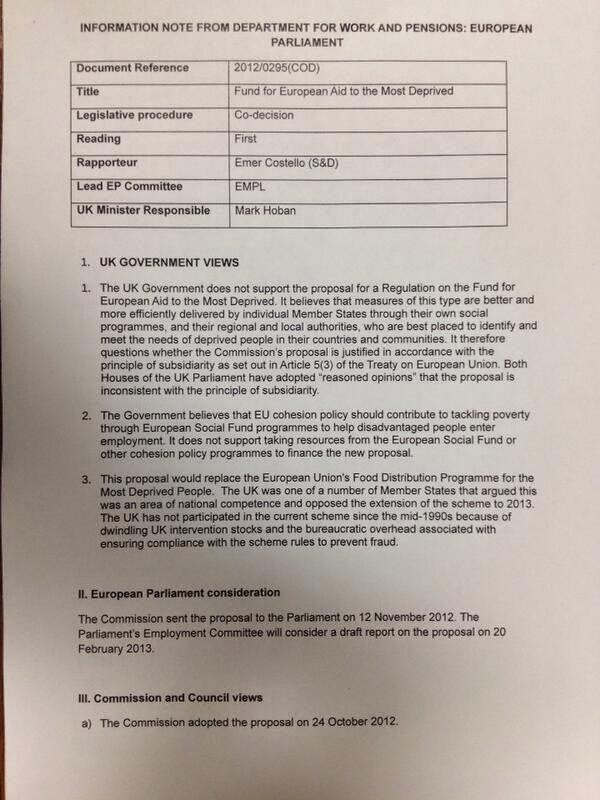 This youtube video tells exactly what it means to rely on food banks, and is a video of one dedicated volunteer, Denis Curran, who runs a food bank - please watch the 12mins to appreciate what the reality looks like.

When I vote for Yes, I will be voting for a system that does not aspire to see food banks normalised, that is intent on fixing the welfare state so that the most vulnerable citizens are not punished, and are committed to ensure a living wage (not a minimum wage) is actually liveable. It obviously wont happen overnight and will take work to achieve, but food banks and the working poor need to be consigned to history in iScotland (and everywhere else on these isles), before the work house is resurrected in the UK.