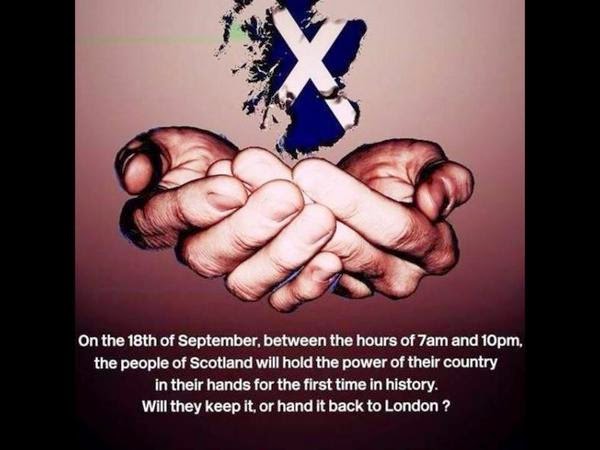 2 days to go, and quite honestly, I'm glad. I can't wait to get into the polling station, cross my ballot paper and post it into the ballot box, then sit back and wait for the results to start coming through later in the evening and through the night.  This once passionate yet friendly (from where I sat) debate and at times extremely humorous one, has turned sour, really sour, and I don't like it. Graffiti from both sides are defacing the opposition's banners and posters, comments are nasty and personal, at times racist, xenophobic and bigoted, and there appears to have been a humour bypass installed at some point too.  This is not restricted to one side or the other - I would say it is fairly even balanced. It is so disappointing, and a really poor reflection of the people who call Scotland, home.
Looking to the future, not too far in the future, just to Friday morning, I hope that regardless of the result (whether it be a surprise landslide to YES or 51% YES or 60/40 win for NO or whatever split occurs), that everyone remembers who they are, and why this referendum was taking place, and what the outcome means for the future.
Part of the YES campaign has been about democracy. There is nothing democratic about vandalising the opposition's property just because you don't agree with their opinion. There will be nothing democratic about taking a major strop and huff if the result is the opposite of the one you voted for. The majority will have spoken (well, voted), and that is the decision that will stand, and we will all have to live with. I hope that everybody can accept the decision and move forward with good grace.
Will I be pissed off if No win, of course, just as my No voting friends will be if Yes wins, but at the end of the day we are still friends and that won't change.  I will still go to work with people who have voted the same and different, and we will carry on our business. You see where I'm going with this...
But what do these two different futures look like after Friday and beyond? Truth is , no-one knows for sure.  We do know however : 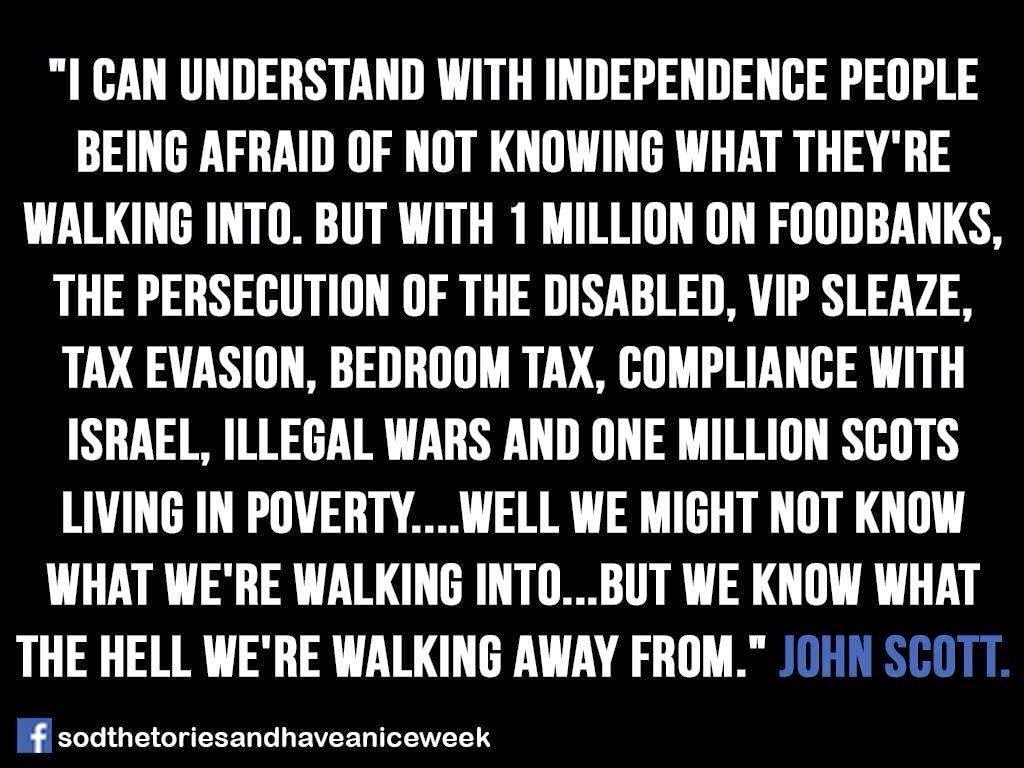 Its important to remember the past, but not dwell on it as we no longer live there. We need to look to history though inorder to learn and not repeat mistakes. We have politicians telling us to Vote No and we will get DevoMax or whatever they are calling it today, but in 1979 the Scots were told similar stories as today, to convince the electorate to vote against the Scottish Assembly. Today we had The Vow on the front page of the Daily Record that the 3 Westminster Parties signed a declaration citing 3 vows they will uphold in the event of a No Vote. The Vow included the funding of the NHS to remain devolved and in full control, yet with TTIP being negotiated, The Vow would mean nothing then as TTIP will be signed off by the Prime Minister of the UK. For those that remember (not me, too young) when the SNP were called the Tartan Tories - called that for a reason, they were not always left of Labour, we are not voting for the party they were back then, nor are we voting for the party they are now - this is not party political, its far bigger and far longer lasting than that.
We have to look forward, to the future, and choose the best possible future we can, and NEITHER side has any guarantees. You have to think about the two futures lying ahead and choose the one that offers the best possibility of achieving what you deem important.
For me, only with YES to independence, does the possibility of a future with greater equality for citizens have a chance to flourish - equality for gender, sexual orientation, disability, wealth; a future where we are not looked at as the annoying relation or thorn in Westminster's side, but as an equal nation, (like all other nations); a future that puts people before profit (privatisation and re-nationalisation of services like NHS, postal service); a future of peace not WMD (Nato membership is SNP policy, not all pro-Yes party policies); a future to grow into ourselves and fully realise our own potential. This is not a view to some Utopia, as is mentioned regularly to those favouring YES. This is a view of a positive future, one we will have to work bloody hard at to make work, one which will take time. If we don't have a dream or a vision for something to work for, to aspire to be, to look forward to, then what is the point?
x
#100days100reasonforyes
Posted by Lissa at 16:02 No comments:

At the start of my 100days series, the indyref seemed like ages away. The whole summer lay infront of us, filled with fun, sun, blogging, campaigning and enjoying life.  That was exactly how our summer panned out.  However, in amongst the fun, and falling knackered into bed, I have missed 18 days in my 100, including reasons such as Welfare, Austerity, Europe, Social Justice, Land reform, Taxation, Wealth, Equality, Democracy, Local democracy, Re-nationalisation, amongst others. How did that happen? I always had full intentions of being able to catch up, hence some posts are out of sequence, but 18 with 2 days left to go!! Anyone got a time machine I can borrow?
Technically I should be writing one just now, but I'm writing this Arrgghhh!!! one instead - not exactly the most productive use of my time, granted.
So, with an empty coffee mug, and still a bit of time to myself, I'd better get on.
2 days to go, people still to convince, a dancing musical flash mob to attend (cannae wait for that one), a YES T-shirt to keep washing and drying (should've bought more than 1),  and blog posts to write as to why I am voting for YES.
Heres to a busy couple of days - and more coffee
x
Posted by Lissa at 00:44 No comments: