Its A New Dawn

Its a new day. Its a new life, for us and I'm feeling blue.

Actually, I'm not feeling blue, I'm feeling devastated, angry, disappointed, disgusted, hurt, betrayed, heartbroken and bereaved. When my head hit my pillow around 6am this morning, having followed the results all through the night, I felt numb. In amongst all the different emotions I've experienced since the results starting coming in,  I am also grieving.  Grieving for the loss of hope, loss of opportunity to make a difference and a better life for my country and everyone who calls her, home, and most importantly, grieving for the loss of a future for my son and his generation (and the next...). When he woke up (knowing I had been waiting on the results) my 4yo asked me "Did we win?" All I could muster at the time was "No". His confused face will forever be etched in my memory, then with the clarity of someone much older than his years he asked "Why? Why did all the NO's want the man in BigBen and Westminster to be in charge? Why do they not want to be in charge? That's a bit silly."  "I don't know, son. Maybe they were scared. Ask your grandparents" "I will!"

That was Friday. Many a tear was shed over the course of that entire day, and then new tears came after a very important woman to me (my Mum) revealed (having been undecided with a strong lean to No) that she had voted Yes. What do you know, its now Sunday, and the thought of her Yes vote still makes me well up.  As does hearing that a fair few of my colleagues at work voted Yes too (although the vast majority voted No). Apparently there has been some heated discourse in the staff canteen...

Democracy spoke, its just a bloody shame, it didn't listen first.  I was born in the late 70's and raised in a time when we were taught to "think before you speak". The generation and the one prior who taught us values and manners, and like to remind us all now and again of these little nuggets of appropriate behaviour in society, were the ones who (73% of them to be exact - thank you to the 27% who did listen, had their eyes open, and thought to the future not the past) did not heed their own advice and did not think. They just absorbed the messages of fear and stuck to stubborn outdated opinions and said NO, without question. Even when some did question - as seen on the televised debates, they chose not to listen to the answers.
It would appear that Scotland is indeed, not to wee or too poor, but by god, we are too stupid! We have no-one to blame but ourselves, right?  45% of the electorate made to decision to take matters into our own hands, to get informed, to grow our own campaigns away from the political parties - National Collective, Radical Independence, Women for Independence, citizen journalists like Wings and Bella, and blogs such as Wee Ginger Dug for instance, all took to getting informed and involved, sharing the messages wide, and had (and very much still have) belief in ourselves to believe that we could be a prosperous and successful country in our own right. Unfortunately the other 55% decided that instead they would believe the scare stories, the media, the vows and promises made by Westminster Politicians, specifically Cameron, Clegg, Miliband and Brown.
Over the course of Friday and more so Saturday, the realisation of what a No vote means, began unfurling before our eyes. The first promise, upon which the No vote was based has been 'missed'

We are still waiting on this timetable, as promised by the seemingly newly appointed authority over Scotland; Gordon Brown.
Jack Straw, Labour former Home Secretary announcing his intention to lock Scotland into the UK for evermore : 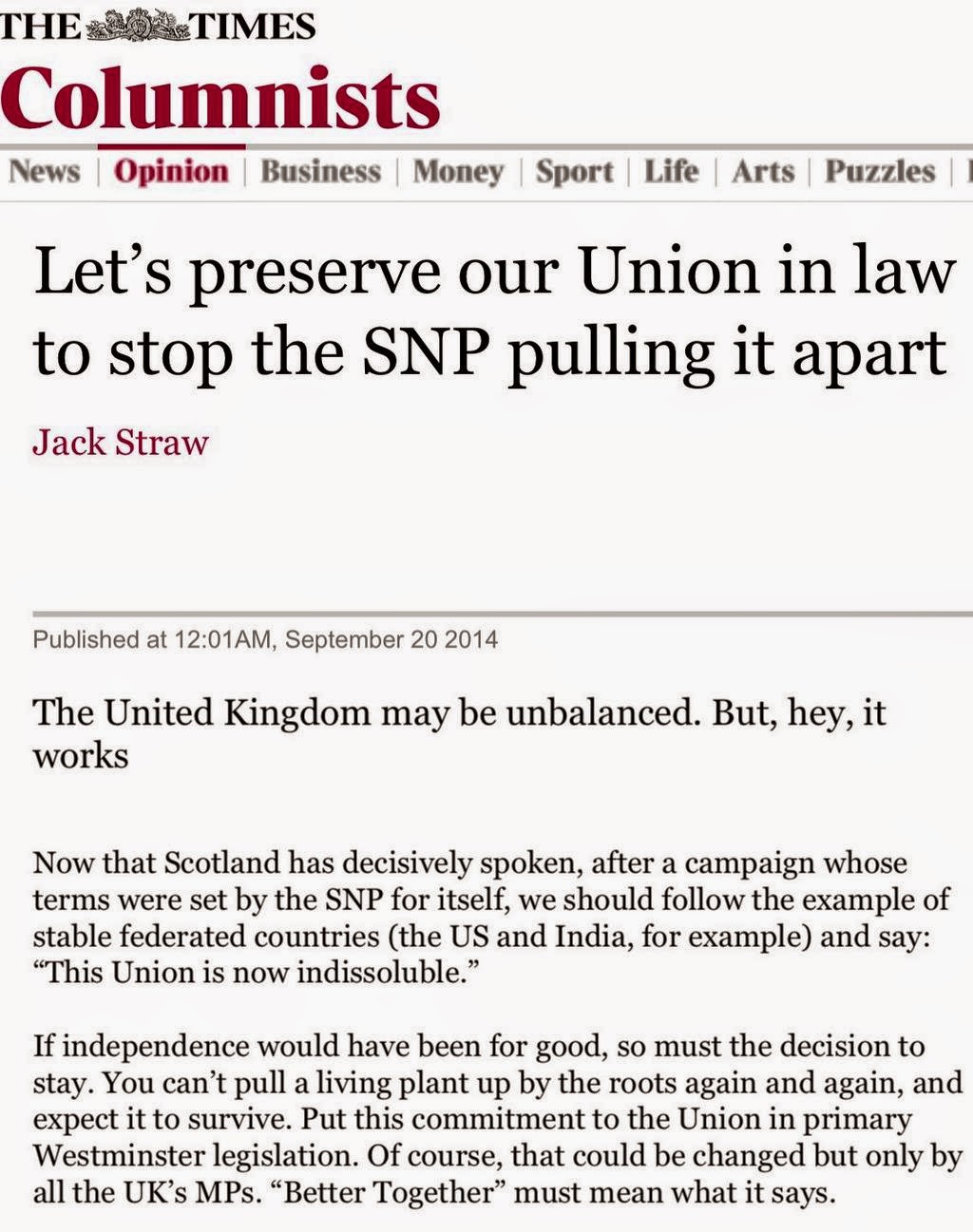 People who voted No to protect their mortgage (cost of repayments and maintain equity in property) :
Here is what is about to happen to your home when fracking commences - which the Scottish Government was against, the once devolved energy power was taken back to Westminster in 2013.

None of this is a surprise. It and more was foretold prior to the polling day.  Democracy reigned and the country voted NO, get used to it and move on. Oh really? Oh did it really? How very democratic was it that Westminster and the Better Together/UKOK/NoThanks (Seriously, how many name changes? Did the No side think they were Prince or P.Diddy?) played a deeply dirty game? Lies, scare mongering, the whole campaign based on you wont get this or this, You cant have that , you  look like you're winning, well we're coming to get you, manipulating the population, particularly the older generation who relied solely on what they read and heard on MSM as they are (in the majority) not online. 37 of our 38 printed newspapers did not back independence, only 5 of them Scottish owned, so always printing with bias, BBC repeatedly shown to be heavily biased and derogatory in their reporting, and yet they go on unchallenged by the powers that be. Big business got in on the act too, its all about the money. Shares in Kellogg's must be through the roof!
And now, we have swathes of people taking to twitter to declare their regret over their decision to vote No.  While I am glad these people have woke up to the reality, its a kick in teeth and makes the pain all the more intolerable.  As a friend said on the matter :"These people have had 2 years to make their minds up, and it takes only 2 days for them to change it?"

Personally, I took our defeat a lot harder than I expected to. I always had an idea that No would prevail, but with the growing momentum for indy, and the switch up of position in the polls, it seemed to be within reach. Once the feeling of 'we could actually win this' was felt, there was no going back. So when 55% of the population decided to remain within a broken union because they were scared of the unknown, or whatever reason they had, the reality and gravity of what they had done was crushing.  The resignation of the First Minister was almost too much.  I have never voted (as have already said) for the SNP, however, Alex Salmond has done so much for this country, he has been a fantastic First Minister, a fine example of a strong politician able and willing (and delivering) to fight for his people.  I was gutted that he did not take us to our independence. However, he did take us to the vote, and 45% of Scotland wants it. Wants it badly - that in itself is a hell of an achievement.

It took a day, we allowed ourselves to cry, to grieve, to take it in, then #the45 came alive. 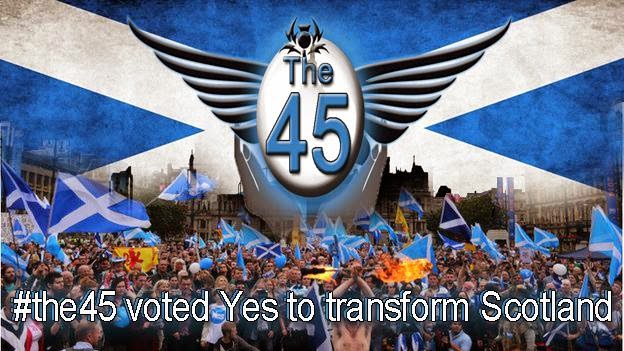 The political awakening that happened in Scotland has been epic.  The indyref was merely the start for what is about to become the most radical evolution in politics ever.  We have a fire in our bellies and are going nowhere.  Grassroots was from where the indy battle was fought, and its where we will continue, alongside the political parties, the parties, of course, being SNP, Scottish Greens and Scottish Socialist Party. Since the vote was declared a win for the UK (a win, yet no celebrations..?) the membership to the SNP increased by 10,000, the Greens membership has now swollen to more members than the LibDems - that in itself speaks volumes.
During the indyref I was involved in canvassing, leaflet drops, blogging on it and very active in social media.  Since the Vote, I need to do more - its like a primal need. I have, like so many others have joined a political party - I joined the Scottish Green Party, as well as CND (getting rid of Trident was an important campaign point for me), and National Collective.
As well as reading through fellow 45ers (and now #the45plus , incorporating those who now wish to join us) status updates on Facebook Twitter and blog posts, the movement towards a better Scotland continues to be inspired by the following:
Bella Caledonia - Wipe Your Eyes, On Your Feet and Evolution not Revolution
National Collective - Statement : How We Won and How We Still Will
Derek Bateman - Here I Come
Freedom TV
Plus we have the Radical Independence Conference in November to look forward to. 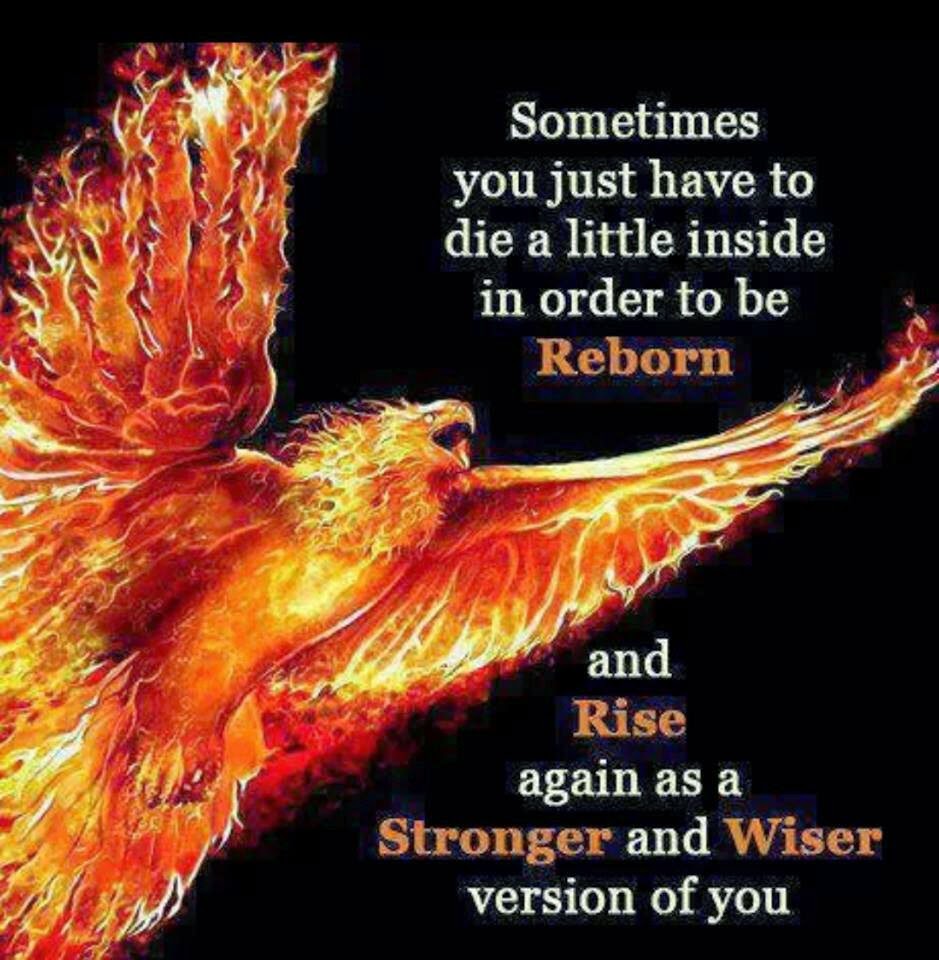 Down but not out. A new dawn has arrived, just not the one we were expecting.
x
Posted by Lissa at 18:08 No comments:

Something Inside So Strong

A little something to keep us going - thank you Labi Siffre