Kiddo has caught another cold, sharing this one with his little cousin, and from this morning, with me too.
As always, it starts off just with a sniffle then very rapidly becomes a sore barking cough.  His last cough, it would seem, was not particularly bothersome as he enjoyed the fact that it made him "sound like a goose"!! The last couple of nights have seen not much sleep and heard a whole lot of barking and stuffy breathing.
Usually its Vic on the soles of his feet, and socks on to bed, and some Boots blackcurrant cough bottle. After 2 nights, this isn't having the usual effect.  This morning we had Tea Tree oil burning in an oil burner to purify the air and a bowl of boiling water with a tablespoon of melted Vic, up on the shelf, to clear the tubes.
We still needed something else to  assist this persistent cold/cough though.  He's too wee for lemsip, and is not a fan of  my failsafe hot blackcurrant and honey drink (my Mum ALWAYS gave us hot blackcurrant and honey when we were small, and 30 odd years later, I still can't see past it).  We decided to make our own remedy.  Time for an experiment.  How hard could it be? 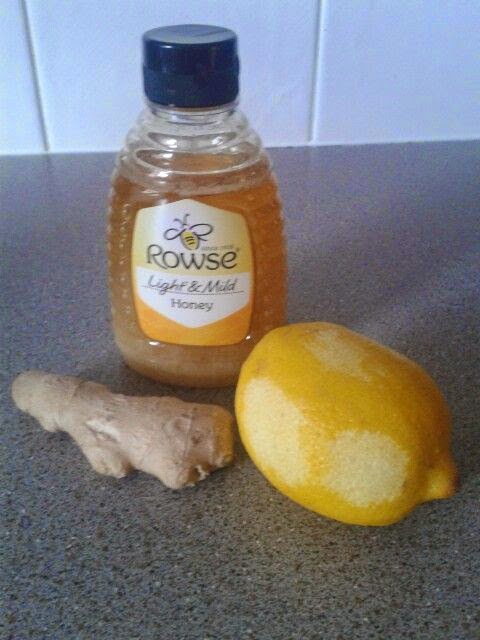 I had some ginger and a lemon (whose zest was used in last night's dinner - its not a manky looking lemon) in the fridge and a jar of honey in the cupboard.
Ginger - its warming  and will induce sweating (sweat the cold out naturally, without resorting to the central heating since the heating just makes his nose even more stuffy).
Lemon - for vitamin C and its antiseptic properties.
Honey - its antibacterial and coats the throat (thinking it would ease the coughing). It would have been better had I had manuka honey, but never mind.
Plus, these 3 ingredients together are often combined  in most cold/flu remedies bought over the counter.

As is my usual style, I decided to wing it and just 'make it'. So I peeled and finely grated a chunk of ginger, which Kiddo thought smelled "amazing".  I let it steep in boiling water for 10 mins before straining it into a mug with the juice of half the lemon ( expertly squeezed thank you very much) and a teaspoon and a half of honey.
Very impressed we were with our efforts.
In order to judge the success of our experimental medicine, the proof would be in the taste test. The mixture was split between 2 cups (one for each of us). I thought it was ok, not unpleasant, perhaps a little too gingery, or perhaps a little too lemony, I can't honestly be certain. I finished my cup, so I would say it was a success. My partner in this experiment however, would emphatically disagree.  I don't think the kitchen floor enjoyed that first mouthful any more than he did, as he immediately spat it out as soon as it hit his tastebuds, and looked at me with utter disbelief that I had even suggested that he drink this cocktail of healing goodness.

Its safe to say that our Cold/Flu Buster was a bust!

I think I may accept the invitation from our clinic to have Kiddo receive the flu vaccine this year.