There are certain things about this time of year that transport me instantly back to the Christmases of my childhood and one of the biggest memory joggers is music.
Christmas in the early 80's to me, was velvet pedal pushers (mine were bottle green, worn with cream tights), house parties with the neighbours in our street, upon where we kids got to stay up late, providing we all stayed upstairs.  Latterly in that same decade, it was more neon highly flammable party attire , but the same constant : music. 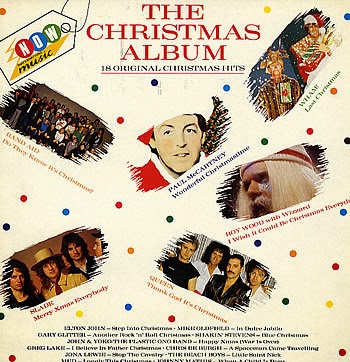 Christmas just isn't Christmas without (in no particular order) :

Over the years new songs have been added to my nostalgic festive collection.  The best though were from my childhood.
Cliff Richard - Mistletoe & Wine
Mel & Kim - Rockin Around The Christmas Tree
The Wombles - A Wombling Merry Christmas
Jona Lewie - Stop The Cavalry
Chris Reah - Driving Home For Christmas
Dean Martin - Let It Snow
The Beach Boys - Little Saint Nick (where the line "Run Run Reindeer" was misheard/misunderstood by my young ears for many a year....I first heard it a child and heard "Run Run Rabies"(!!) and never actually thought to figure out the correct word....)
Chris De Burg - A Spaceman Came Travelling
John & Yoko - Happy Christmas (War Is Over)
Eartha Kitt - Santa Baby
Bing Crosby & David Bowie - Little Drummer Boy

That is up until 2003, whereby there were a few Christmas songs in the charts (yay) which have earned their place in my list. Songs such as :
The Darkness - Christmas Time (Don't Let The Bells End)
Bo Selecta - Proper Crimbo

However, the X Factor has ruined the traditional Christmas Number 1.  I perhaps wouldn't mind so much, but their songs aren't even festive!

This year I have gone digital and made a Crimbo Playlist on Spotify, so I can have my tunes where ever  I am at home, rather than just in the livingroom,  Kiddo is starting to like music (has stopped telling me to "turn it off!") so hoping that he also likes my "choones", not just because he's going to be hearing them for the next month, but also to start his musical memories of family traditions and festive times. Such as signing along as we decorate the tree tomorrow.

Of course, I can't leave this post without a mention of THE best (in my opinion) festive tune,
Guaranteed to make me feel all festive and of course, sing along : Fairytale Of New York