We haven't finished yet...

Still got decorating and making to do.
Last year I found a fun 'activity' on pinterest  for growing 'Magice Elf Seeds' into candy canes using Tic Tac sweeties. I thought this was brilliant and a must do for us. I used jelly beans instead of Tic Tacs, and only red and white ones (the colour of the candy canes). Kiddo had fun and loved the candy canes the following morning, but he was only 3 and his enthusiasm quickly waned.  This year, I prepared the tray with the growing bowl (icing sugar) and the bowl of 'Magical Beans'. Kiddo clocked it straight away : "Ooh, are we growing candy canes again?" He remembered doing it last year. This year however, he took a different approach : he counted out how many "Candy Cane Beans" he had - 10 red and 10 white - "20 Candy Canes <massive grin>" I asked what colour candy canes were and suggested that maybe 2 beans were needed? <much smaller grin> "Only 10 then". I decided not to burst this festive bubble by going on to tell him that the cane were for the tree... 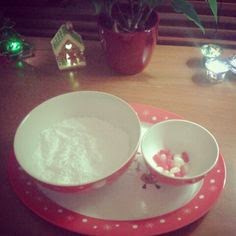 The actual planting was fairly precise, with the added note to me that he would do all the planting because I "kill plants" (referring to the unfortunate demise of numerous spider plants in my care).  Once all planted, re counted and covered over with 'snow soil', he was satisfied that his gardening efforts were to his satisfaction, he went to bed. 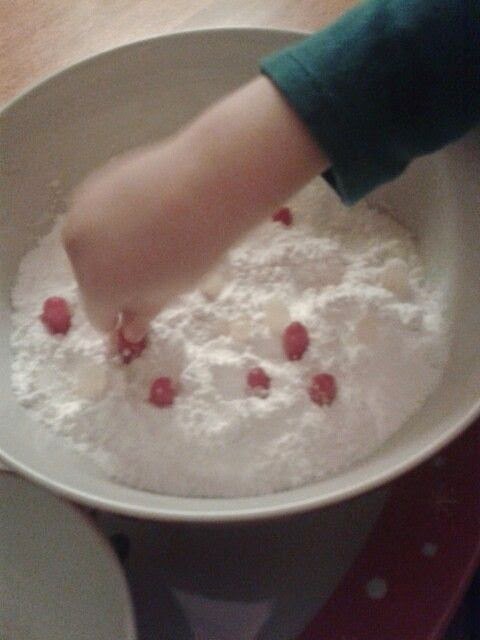 Once I was satisfied that he was sound asleep and in no danger of getting back up, I set about retrieving the jelly beans - the white are tricky to find at times (thats why it is always useful to know exactly how many you start with!). Red jelly beans covered in icing sugar are sooo good.... Anyway, jelly beans harvested, candy canes planted and a dusting of silver glitter and we were good to go for the morning.  Not really thinking at the time, had to do some quick thinking before my coffee had kicked in, when Kiddo announced with a hint of a squeal, that there were 12 canes in the bowl!!! 12!! Not 10, no no 12!!  Wow, they really were magic - the 2 I meant to keep back for my wreath ended up in the bowl..... oh well at least he now had 2 spare that he could eat and the rest could on the tree without any bursting of festive bubbles.  I got strawberry flavoured ones as opposed to mint, as he was thoroughly disappointed last year to discover they were minty (he hates mint). 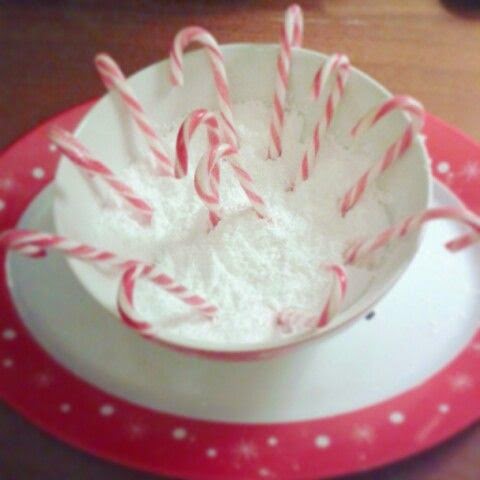 It was time to 'festify' the broom that sits at the front door (not really much to be said here) : 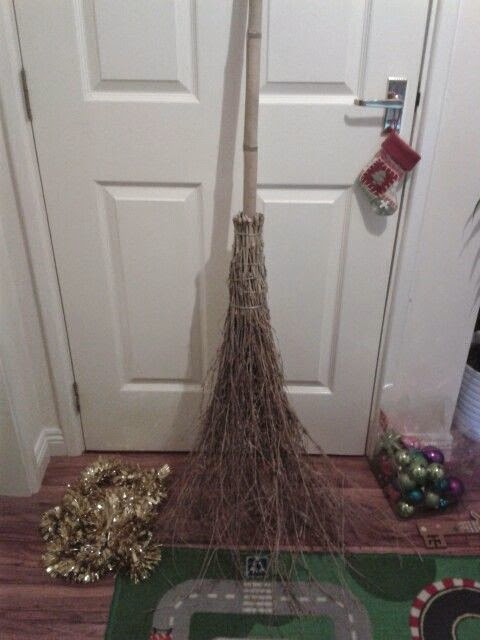 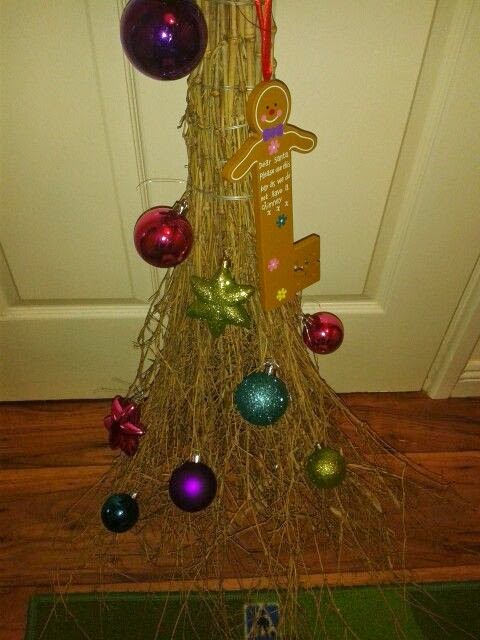 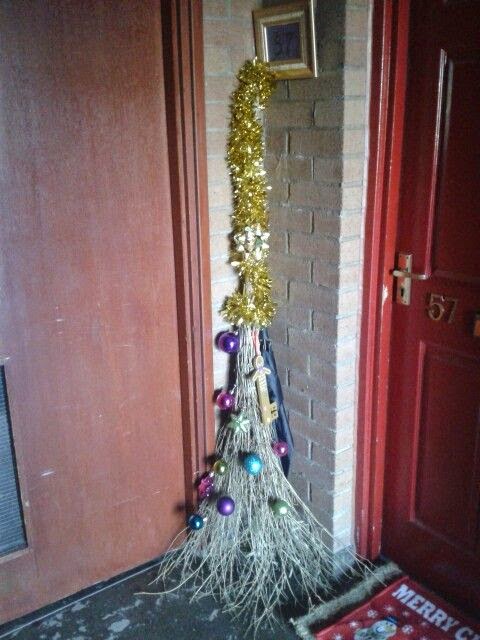 The best fun of the day had to be making edible gingerbread biscuit decorations (using Nigella's recipe, substituting honey for golden syrup). The smell was making me more impatient for them to be ready, than it was Kiddo, he was having so much fun rolling cutting out the shapes and rolling again.  The ones that worked out the best were the ones deemed suitable for the tree, the rest we would eat - almost half of each (handy that as they turned out to be extremely tasty!) 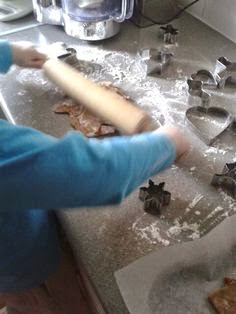 Once cooked and cooled, it turned out we didn't have as many as we thought we would for the tree - our quality control measures are very thorough.... 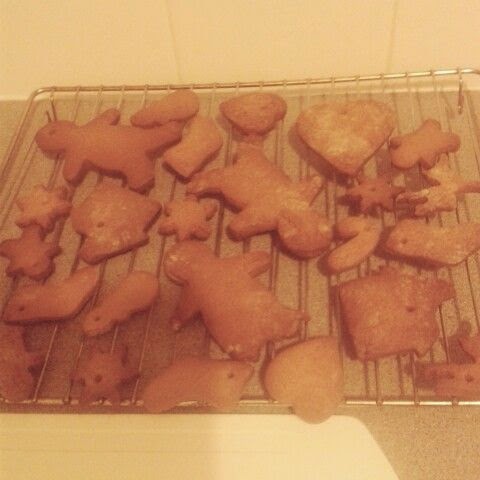 Kiddo decided that icing was boring, and that I could just ice them myself (I'm not complaining, I was secretly delighted, but shh, don't tell him that). 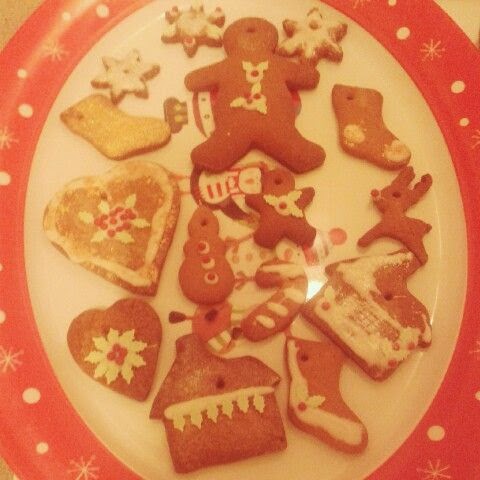 And so now, our tree has more decorations on it here's Kiddo's home grown candy cane and our home baked gingerbread man (the smell of the biscuits on the tree are incredible) 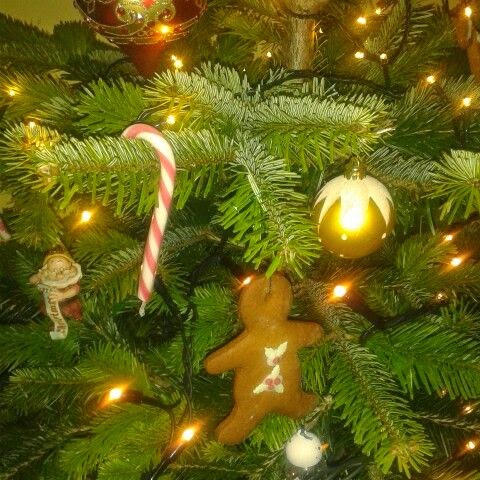