Done and dusted for another year 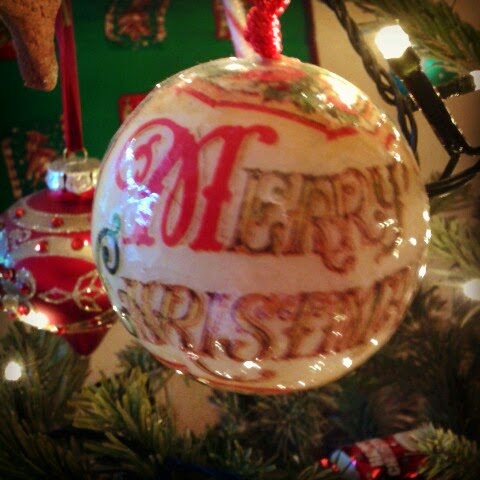 After spending nearly 2 months planning and preparing for this week, I am happy that it is almost at a close.
As I sit here on the evening of Boxing Day, watching the Big Fat Quiz of the Year and enjoying a spicy rum, I am desperate to get started clearing away all the Christmas clutter ( not too desperate to want to do it tonight. No no, that's a job for tomorrow). There is Lego everywhere, a glow-in-the dark jigsaw lying on the floor under the hall light, in an effort to make it glow when the lights are turned off, a pile of new clothes on the couch, an even bigger pile of books on the floor next to the couch (Kiddo's not mine - I am extremely jealous), experiment samples 'in progress' from his science set that were trialled last night, various other bits of 'giftages' and I am all cozy in my new dressing gown.

Looking back over the past month (and the planning and lists from November), I can see easily what worked and what didn't; what changes to make for 2015.  Most importantly, I can hand on heart say that this festive period was a success - we (Kiddo, Hubby and I) enjoyed it.  As I mentioned in previous posts, Christmas time has been a bit of a nightmare and at times, a horrible chore to endure over the past 2 years.  This year however, we changed it up and spread out the wole fandango, and it worked.

So whats the plan for next year?
1. No Elf - kindess or otherwise! We lasted 3 days with our Kindess Elf and her pet mouse.  The ideas I had for her to suggest were all things I had already planned. It just seemed really disingenuous and I would rather Kiddo learned to be kind from observing us (his parents and family) rather than taking instruction from a cutesy doll.  That may seem a bit bahumbug and over thinking of the fun wee elf, but I think its important to go with feelings rather than just going along with something because its a new trend, or such like. Plus, Kiddo wasn't really all that into the whole Kindness Elf anyway, so why bother? It then becomes something of a chore and enforced merry-making fun, which is anything but fun.
2. Craft projects - the only person in this house who enjoys a craft project is ME! This includes making Christmas cards - Hubby was the only one to receive a homemade card from Kiddo this year. His Grandparents are still waiting for their glittery creation (they are in for a long wait...)
3. Baking - We (Kiddo and I ) had so much fun this year baking treats for gifts.  The successes were mainly from the Goddess that is Nigella - Sticky Gingerbread (had to bake a second batch as we ate the entire first batch), mini-mince pies with cranberry mincemeat (even I like these and I ordinarily hate mince pies), Christmas Rocky Road (made Christmassy with the use of Amaretto biscuits) and Christmas cake. We also made chocolate peppermint creams, chocolate fruit'n'nut drops and that disaster that was the fudge.  Next year will be all about baking.  The only thing we didn't attempt was a gingerbread house.  Just stuck to my tealight ceramic gingerbread house instead... 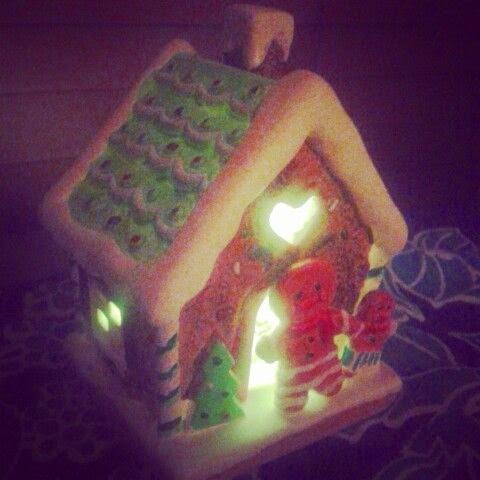 4. Family trips and days out - Edinburgh was great, we all enjoyed it, although next year, I would like another day through, just Hubby and I, so that we can actually get a good look round the stalls (very boring for a wee boy) and enjoy the city (read : dinner and drinks).  The Santa cruise at the wheel was fun, but done.  We won't be going again next year, especially as Kiddo has been checking the authenticity of their Santa...
5. Food - Part of what makes this time of year so memorable, bedding in the tradtions and 'heart-warming' is the food.  I love cooking and eating good food.  This week I have made our Yule meal ( a glazed ham was the main dish, followed by festive spiced cheesecake.  I have never made cheesecake before, but this was lush - had to tweaked the recipe and quantities of spices, but oh so good),  Christmas Eve was the full works  with Turkey and trifle, while the actual day itself was a smorgasbord of leftovers and cheese'n'biscuits, which also carried over into today.  My fridge earned its keep this week!
The only downside to having so many meals to prep for this year was the amount of space I have in the fridge/freezer; something had to give.  Unfortunately it was the breakfast stratta.  I have made stratta every Xmas Eve for the breakfast the following morning for 8 years (since watching the Family Stone - it sounded lovey, and having tweaked that recipe too, it is lovely).  No word of a lie there was nothing else getting in that fridge.  Both Hubby and I missed our traditional breakfast this year - next year there will be stratta!
6. Spreading it out.  Part of the problem we have had in the past is that everything all in one day : Santa, presents, relatives, lots of people coming and going in our home, taking Kiddo away from his toys to go to dinner at his grandparent's home, par-taking in a big dinner where Kiddo doesn't like any of it apart from the chipolatas and the trifle, to the expectations of 'being a good boy' are just too much! Yes, most children (who's families celebrate Christmas) get excited at this time of year, but its not fun when your child isn't coping with that amount of pressure.  Hence why this year we spread it out.  Kiddo, Hubby and I celebrated Solstice/Yule on 22nd (21st wasn't an option as both of us were working) with, amongst other things, a lovely meal and exchange of our gifts. Just the 3 of us - no pressure, just relaxed. It was a beautiful evening.  Christmas Eve we had my parents over for the full dinner, as Kiddo had received his gift prior to dinner from them (I had put a 1 toy limit on gift givers this year as too many toys, again, just took the fun away) he happily played away whilst we ate.  Again it was a fairly relaxed affair which felt like Christmas (not the previous 2, but the Christmases of old).  Every year, our very good friend, Scunnerred, comes round in the evening and shares Xmas Eve and we exchange gifts.  It is a tradition I hold dear.  He noticed the lack of stratta being prepared (what I am usually doing when he arrives).  This will not be the case in 2015!
On the 'big day' itself, neither Kiddo nor Hubby changed out of their jammies, and pretty much played all morning with the toys from Santa (we had a stocking each, and I put Kiddo's presents into 1 box and wrapped it before putting it by the tree.) My in-laws came by for a couple of hours and enjoyed a simple lunch.
It was the most chilled Christmas I think I have ever had.  Kiddo and I did the experiments in his science set, built his jigsaws, he and hubby made Lego things and we had no timetable, no pressures no rules, no Queen's speech.  The day ended watching a dvd snuggled on the sofa - Hubby and Kiddo that was, I bugged out early to bed feeling a little nauseas - too much cheese!
Boxing Day was nice but easily the most tense for Kiddo. However, now that all the gift giving and heightened excitement has passed, we can get on with playing and enjoying the fun and interesting gifts he received. Thank you cards will be written over the next few days, although I doubt very much they will be handmade this year....
Next year we will still have our tree up on the 1st, but everything else will very much be simplified and spread out again. But before all that, we still have a few days left of 2014.

This coming week is all about the redding - getting our home ready to bring in the New Year,including taking down the tree and all the decorations and starting 2015 afresh and clean (its considered bad luck to bring the new year into an unclean house). Traditionally the redding took place on Hogmanay, but I haven't the workforce (children) to gut an entire home in 1 day, so it takes me a bit longer. 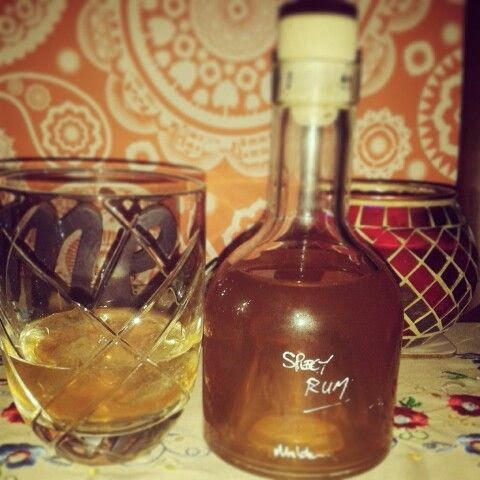 As much fun as it has been, it is also satisfying knowing that its done for another year.  I am looking forward to January.  The bleakness of the month is refreshing against the hoo-ha of December, a time to clear ones head and enjoy the fact that I don't do diets - especially in the middle of winter. Comfort and calories are a necessity.