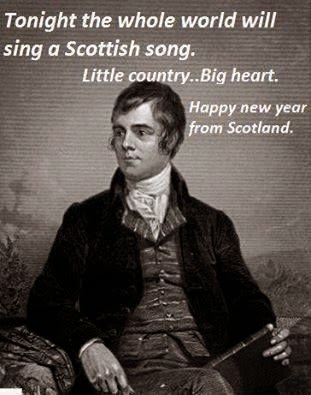 With the redding almost complete, and the steak pie in the fridge, the porridge oats are soaking in whiskey for the cranachan, I can look towards tonight. Hogmanay round ours is a quiet affair, no ceilidh, no traditional first footing (hubby may be tall, but he's not dark (ginger, therefore considered bad luck...!) nor a stranger, obviously).  We have whiskey ( and rum, and red wine...not all for the same glass!), shortbread, some fruit cake (aka remains of Christmas Cake).  We also have Jools Holland's Hootenanny on the box (we love and always watch Jools).  Kiddo may stay up, he may not - he is a bit poorly today so will have to wait and see.  He stayed up last year with me as Hubby was working, but thankfully he is off tonight.
I used to love Hogmanay when I was a child, especially if I managed to stay up for the bells. I loved that excitment of midnight, the New Year drink that was not allowed to be touched until after the bells, and also the good telly.  The telly is not a patch on what it used to be, especially (as I got older and understood the comedy) Rikki Fulton's Rev IM Jolly

When I was young, a year seemed like an eternity.  When I turned 21, everybody older told me that the years would now fly by. The speed at which 2014 passed was just plain ridiculous!
Thinking back at events that happened and places we have visited this year seem at odds with the time frame for when they actually took place : My Mother's birthday celebrations in May could have been 2 months ago, yet the Referendum seems like a different year ago.
2014 has certainly been a busy and enlightening year with definitely more highs than lows, yet it's not one I'm sorry to see the back of.
The Highs this year include:
*starting this blog (how have I been writing here for almost 8 months already?)
* the birth of my 2nd nephew, and watching the bond between Kiddo and his cousins grow (even though he calls them, brothers)
* my involvement in the #indyref through writing, researching, making friends and meeting people, whose paths I would never have crossed otherwise
* making the final decision to home educate Kiddo, and remove him from nursery.  The difference already is proof in making the right decision.  I am encouraged by the leaps he has made, just through playing and baking
* making new friends through home-ed groups, both online and in person at various meets.  New friends that are now firm friends
* the many trips and outings we had and new places explored with our friends and just the 2 or 3 of us (depending on Hubby's shifts). Many an adventure had
* understanding Kiddo more and his personality as he develops and grows into his own wee person. Not always easy, granted, actually sometimes a bloody nightmare, but the understanding of him is the key, and a privilege
* Kiddo embracing the changing seasons, particularly Autumn (it would appear this is his favourite season too - yay!)
* Hallow'een (Samhain) and Yule were particular special times
* Joining the Scottish Greens political party - the motivation and dedication of the party, their ethics and policies, I am proud to now be a part of
* realising who are the real and the toxic people in my life (definitely a high)
* learning to be more of a honey badger...

The Lows of the year include :
* the referendum result.  Not so much of a low, as complete devastation.  However, I believe fully with while we lost this time, it has only fuelled the fire for the next time - and there will be a next time.
* today I take off my Yes 2014 wristband.  Not to toss aside, but to live in my handbag, as a reminder, not of what we lost, but what we are working towards. 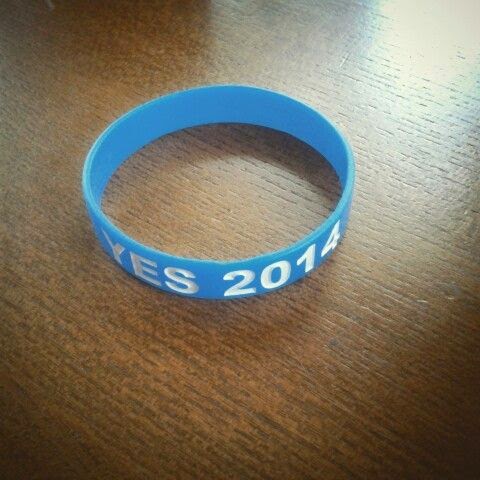 * in this past year I have known 25 ladies to have had babies (17 of whom were expecting at the same time). This may seem like a strange low, but it is a low as, while I am truly happy for them, I am struggling to accept that I am not going to have any more babies.  Selfish, yes, but this is my list...

Leaving 2014, I thought it was time to share my favourite song of the year: Gerry Cinnamon's brilliant, Carpe Diem : Hope Over Fear

The cliche of New Year New Me is one so trite, yet has an irresistible pull.  I love the notion of a clean fresh start.  Sort of like when it was time to get a new jotter at school; that first page was always a pleasure to start, with best handwritting, which quickly went down hill once that page was turned, But regardless, the first new page feeling is the same.

My resolutions are made.  Will I keep them? I'll try my best. They do not include the words : gym, chocolate, wine or organised, so that's a good start.  They do however include the words : simplify, joy, present and focus.
I am looking forward to what 2015 holds. I have no preconceived notions of what will be, but have a feeling it'll be a good one. Not as good as it could have been, should we have been starting the New Year, with the Yes vote, but we make the best of our situation (roll on the General Election), making the most of and enjoying what we have.  There are so many less fortunate than ourselves.

(And it wouldn't be New Year without saying "See you next year" - I know its dead annoying, but hey!)