One of my New Years Resolutions was to 'Simplify' my life.  So the first thing I am simplifying is my "beauty regime".  This is in inverted commas as you could hardly call my daily ablutions and the products I use as a beauty anything, but go with me here please.

Since puberty I have used probably every product in Boots and the Body Shop on my face from Biactol and Clearasil to Oil of Olay.  I was never blessed with clear skin and small pores. Oh no, I had acne and wide open pores, which plague me still today, despite leaving my teenage years behind not only in a different decade, but a different millennium. The only time I have had 'nice skin' was as a child or when I was on one brand of contraceptive pill (which in the end gave me migraines and weight gain - what a trade off!).

Face
Its fairly basic, to be honest. No Cleanse,Tone & Moisturise gittering about here. Ordinarily I used only pure soap and water to clean my fizzog, and moisturise (been using Pure Nuff Stuff's Cream Dream moisturiser for 6 years, alternating between the Geranium & Lemon and Rose & Vanilla - which is the one I am currently using. It smells fabulous.) afterwards. Sometimes I use distilled Witch Hazel as a toner if my skin is needing it, or if spot is bothersome/large.  Sometimes this is fine, other times I feel the soap quite drying, but I try to keep the amount of crap I use on my skin to a minimum (including make-up; I don't wear foundation or powder as it just clogs my pores.  Even mineral make-up seemed to amplify the pores around my nose..not a good look! So I go bare faced and keep the colouring in for the eyes and lips).  Also, since having Kiddo, my skin has been in quite a poor condition, particularly my cheeks which have developed a rosy colour and acne scars appear more visible (I'm painting a braw picture here!).  This could also be attributed to aging as well, but I'm not entertaining that one.  Age schmage! Same goes for the wine consumption, although I really could do with drinking more water, less coffee/tea.

Teeth
During my wander along the path of reducing toxic chemicals and trying for a more 'natural' (which can still be toxic if used incorrectly, and can create 'chemical' reactions of their own when mixed) lifestyle, I have, over the years tried a couple of different toothpastes.  Moving away from the usual brands in probably the vast majority of bathrooms up and down the country - for reasons such as animal testing, use of flouride, plastic tubes (this one was when I was trying to live with as little plastic as possible and found a toothpaste in a metal tube.)  I really liked the fennel paste (no flouride, no SLS etc) but it was too expensive to use regularly, despite the great flavour, cleaning power and fresh breath. As it stands I've been using Sensodyne, because its the the one Hubbs needs for his sensitive gnashers.  I am always swinging back and forth between the flouride yes/no debate - I'm protective of my teeth.

Pits
I'm a Soft & Gentle girl - Lavendar and Patchouli roll on - used it for years, certainly the past decade.  Again, there was a spell around 2009/2010 (especially when pregnant and when breastfeeding), whereby I tried alternatives such as crystal deodorant (run the crystal under the tap and rub under the armpit) - Pitrok solid and spray - the solid worked much better than the spray for me. But after a while, I returned to my old faithful.

So what does all this have to do with Coconut oil? Everything!

For face washing, exchanging soap and hot water for oil and hot water. This may seem bizarre for someone with an oily complexion to then use oil to cleanse the face, but I have it on good authority (other bloggers, people on 'natural living'/ green forums) that it does actually work, and reduces the excess oil produced by the skin to combat the stripping away of oils from washing with soap! I've mixed together warm oil (its solid at room temp, but liquifies in the heat of your hands) with some extra virgin olive oil and used lavender and patchouli essential oils.  I love both these oils (patchouli being a particular favourite along side frankincense), not just for their scents but also their healing properties - both area antiseptic, and good for healing acne scars while patchouli is also astringent.
A simple, dampening of the face with warm water, massage in the oil, wash off with a face cloth in hot water (as hot as is comfortable).  Been using this for just under a week now, and my skin is so soft, and not nearly as greasy/oily as before. So far so good, will keep going.
(Recipe used was found on pinterest)

To replace 'normal' toothpaste, mix the same quantity of coconut oil with bicarbinate of soda plus peppermint essential oil.  I initially made a small batch try - 1tsp of oil and soda, but the taste was too weird, a little 'salty' so I then added the oil.  I wanted fennel oil as it is good for destroying the bacteria that causes tooth decay, but Holland and Barratt have discontinued it.  As I wanted to get started straight away, I bought peppermint essential oil instead.  It has made a big difference to the flavour.  For my 1tsp measure of the above ingredients, I added 5 drops of essential oil.  The texture took a little to get used to.  I am not usually a 'tidy' brusher of teeth, I have foam everywhere, so it is pleasant not to be quite so messy, plus I no longer get that red marking around my mouth from where the toothpaste foam has irritated my skin.  In the past week I don't know that there has been much differnce to notice so far, so will just keep going and see what my dentst says at next weeks check up.

Confession! I have the oil and bicarb (and bought sachets of arrowroot powder) to make my deodorant, but I have yet to make and use it.  I am procrastinating. I like and trust my S&G an am nervous that my home made replacement won't work and I end up smelling...granted it is winter and I am always dressed in layers, that any chance of smell being actually able to get through is slim, This really is the best time to try it out before the summer and bare armpit season.  I haven't embraced this one as I have the others. I need to.  Even just to show myself if it works. Really think this one ties in more with the whole drinking more water (less toxins than in my coffe/tea, and it flushes the system).  OK have talked myself round. home made deodorant will be made and used. At some point...

I have glass food storage dishes with plastic lids that I store the mixes in. (I read somewhere a few years ago that essential oil does not store in plastic containers) and the bathroom cabinet now looks more like a kitchen one! 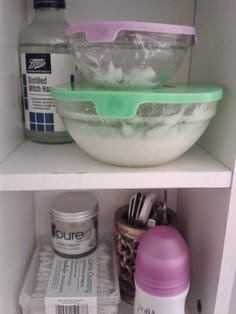 This may seem like a lot of extra work for someone who is trying to simplify their life, but simplifying is not restricted to doing less, but also using less. It took a grand total of 15 mins to make both products, using the same base ingredients, using less packaging and spread out/broken down, costing less per product too.

My aim at the moment is to use the above 2 'products' 'potions' for a month and see how it it going (and obviously report back) and take it from there.  So that's my first step into 'simplify simplfy', Well...it is if I don't include the method of simplification I used for last nights dinner - take-away pizza...its 2forTuesday, it would have been rude not to...

For more info and 101 uses for Coconut Oil, click here to the Wellness Mama site.