One of the things I was most looking forward to, when we moved house, was a home with its own garden. A garden in which I could cultivate a veg plot, a wild flower and insect habitat, an apple or pear tree, have a patio of sorts for al fresco dinning and relaxing in the morning in my jammies with a cuppa or in the evening with a vino, by the fire pit (fires are good for the soul - I read that somewhere, can't remember where, but it is so true!). There would be space for Kiddo to play, explore, a bit to call his own, to grow sunflowers or veggies or just make a mess. And of course a place to hang out our washing.

But alas, like all good plans, it didn't quite pan out like that.  We didn't move. We do however, already have a garden that is vastly under used. There is a 138ft long stretch of communal lawn, overlooked by 26 flats on this side of our block. Of this 26, only 4 households use the 'garden' : us, the girls in the flat directly above, a family on the top floor (their 10 year old plays out sometimes after school and their chihuahua goes "walkies") and someone down the bottom end has been hanging out their washing.

We've used the garden in the nicer weather over the years, to sit out in the sun, have the odd BBQ, more so since Kiddo came along - he particularly enjoys running about in his jammies and bare feet. The problem we have though, is that we aren't "allowed" to do anything with the 'garden', and we get to pay (through our quarterly factor's bill) for the 'luxury' of 'gardener's' to come every few weeks and butcher the lawn.

A couple of years ago, I decided to take matters into my own hands. Kiddo had made wildflower seed bombs at a nature craft event, so we launched them all over the grass. I then bought a few packets of wild flower seeds and scattered those too. That summer there had been some sort of dispute between the factors and the 'gardeners' so the grass and seeds had a chance to grow. The lawn was stunning - quite long with lots of patches of colour and flowers and, to my mind, looked beautiful. I loved it. Then I came home from work one day to discover that the dispute had obviously been settled - the wild meadow had been razed. The twisted willow tree that I had planted in the corner (I bought it as a plant for the living room in hope of being able to replant it in this fantasy garden of mine in the imminent future...plus it was really cool, all twisty and curvy...) also fell foul of the strimmer, and lay mangled in the grass clippings. I was actually devastated. I ran round to the front of the building, where the barren piece of land next to the steps was. I had scattered seeds there too, which were also starting the flower, albeit at a slower pace due to being in the shade - the ground had all been turned over, and bits of greenery could be seen lying kerb side and blowing in the wind.  Bloody raging I was. Granted I didn't have permission to take over the gardening endevours for the block, but all efforts to make the place look better and have a little bit more of a purpose was, it seemed, not allowed!

Last year we had quite a fine summer. In order to spare my poor flowers, I got some tubs and grew wild flowers (for the bees as well as just looking bright and colourful) and giant sunflowers which went well. Sadly the raspberry bush and blackcurrant bush just looked like twigs sticking up out of the tubs (and still looked the same until I took them out, both dead, last week). 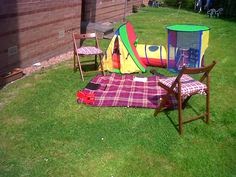 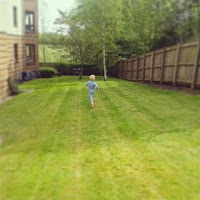 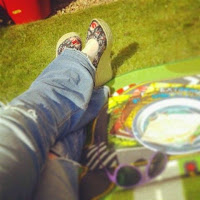 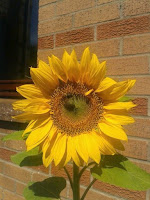 Living where we do, we get a lot of birds visiting our 'outdoor space', so to tend to our feathered friends we have made feeders from pine cones a couple of times and also have a feeder on the window, which is great for twitching. We hung a bird house on the fence last spring, but even now, no-one has taken up residence.  The girls upstairs have decided that the garden is somewhat lacking in, well, being a garden, and have also hung a bird house and decorated with floral tubs.  The little touches really do make a difference to such a vast, sparse, under utilised bowling green. 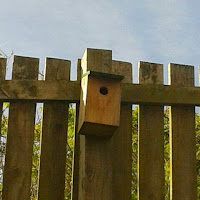 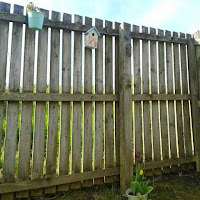 This year I have decided to increase our gardening effort - keeping to the tubs on the stones, therefore not actually touching the grass and not at risk from careless butchers, I mean gardeners, wielding their mighty strimmer. We have lots of bee friendly flowers (some in flower, others just seeds still to grow) in various colours, more greenery in the form of ivy and ferns and a delightful black cauldron filled with wildflower seeds which should produce a riot of colour.  I may have also used the spare seeds along the border at the fence...just to see what happens in the betwixt where the strimmer can't reach (insert evil cackle and little triumphant guerilla gardener jig).  When I turned over the bucket BBQ I found this gorgeous snail (there were actually 2 of them.)  With quite so many tubs and containers this year, I thought about using the now defunct purple wooden shoe rack to make a display. It fits in the border perfectly. Unfortunately, we live in a less than salubrious area and I would be concerned that any chancing robber would use it as a ladder into the window (even though I never leave my windows open when not at home). 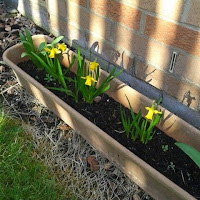 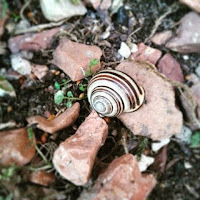 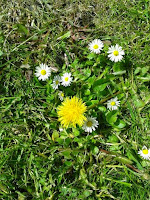 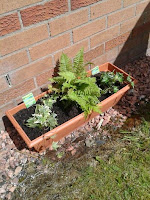 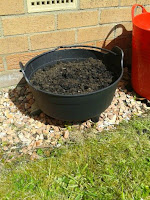 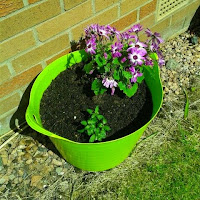 With a tub to spare (also it's the one that I forgot to put drainage holes in last year and is now somewhat waterlogged) Kiddo sat down to play with it, making mud pies and grass soup for lunch.  That particular game didn't last long. I hate to report, but the content is now "elephant poo" - I'm not sure why he needs to take cupfuls of said poo and pour it out, but hey, it's his choice... 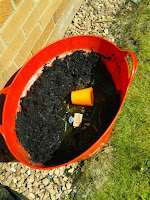 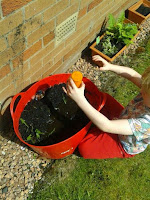 And I'm not finished; I want to try growing veg and herbs in some tubs too.

I have mentioned the need to keep my tubs within the boundary of the building and off the grass for a very specific reason - we're not allowed to use the grass!!!! I kid you not. We get newsletters in with our quarterly invoice, reminding us not to have any personal property in the communal area, including a washing line! Yes, we are not allowed to dry our washing outside.  I live in a block of flats, where there are no windows in the bathroom, and my kitchen overlooks the bin store, so obviously my home is well ventilated... I say, bugger that! Every day that it's drying weather I have an airer out the back, drying my washing. Today is bedding - it's had a good blow, and will smell lovely going back on the bed. I remember a few years ago (maybe 4 years or so), the wee one from the top floor got a trampoline. Same as us, thought, no-one uses the garden so why not - put up the trampoline only to get a letter to us all from the factors, demanding that the owner of the offending trampoline remove it with immediate effect.

I know of no point to having 138ft of badly mown grass.  If we are not permitted to dry our laundery, grow plants/flowers, play outside with our children and their toys, have patio furniture or bbqs, then they would have been as well making it a car park, or at least have storage facilities for the flats, being that bicycles are not allowed to be stored in the closes either.

Did I say that we pay for this 'privilege of being told how we are to use our common space?

Realistically I can't have my yearned for fir pit, but with our camping chairs and the bucket bbq, tonight I'm going to get it lit and sit with wine and toast some marshmallows with my wee family, in the 'garden' we pay for (once the washing is back indoors, of course).