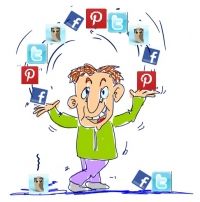 I'm either in, or I'm out. No Hokey Cokey or half measures here.  I have what could be called an 'addictive personality', (a keek into my early-mid 20's would qualify that statement). Alternatively, I am just really lax in self control and discipline!

On Friday 26th June 2015, I had had enough. It was almost lunch time and I had achieved a grand total of zero for the morning's efforts. Why? Social Media! My time is regularly lost into a virtual vortex; sucking me in with Facebook updates, tweets, Instagram pictures and Pinterest. Two or three hours can easily pass, and I will have felt an array of emotions : happy for friends, rage and frustration with politics, excitement for events coming up; apathy for the filler crap that I scroll past, amongst bewilderment, confusion, joy, amusement, WTF?, inspiration and exhaustion. Not forgetting of course reading the BuzzFeed lists that are either hilarious, or their title suggests entertainment but reality proves rather different ; a waste of time!

My head was spinning. I felt a bit exhausted and disgusted (with the amount of time I lose to SM with nothing to show at the end of it) by it all, if truth be told. I needed a break. So, at 12.05pm on that Friday, (standing in the kitchen where I had been rooted to the spot reading 'stuff' for the past 27 minutes under the pretence of "making lunch") I messengered my nearest and dearest on Facebook advising of a self imposed 30 day hiatus. I no longer had social media fatigue, but was quickly falling into a social media coma! There. Done and dusted and free for the next month. I did actually feel good about this decision. I did still have to nip onto Facebook each evening as I admin on a page and wasn't going to let the other Admin person down because of my choice to take a break - I just went on, did the nightly post, and buggered off again. Of course, a couple of things caught my eye each night, but as far as possible, I didn't stray back into the fold, apart from to look at a couple of Falkirk Greens posts.

Naturally, I picked the wrong time for a social media holiday; Glastonbury weekend, the situation in Greece, the Scotland Bill, the atrocity in Tunisia, EVEL and Pride,  amongst a host of other things happening at home and around the world.  The majority of my info on such matters has been gleaned from MSM - and I have to say it is somewhat lacking. This is obviously no surprise. I am glad of my email updates from The Common Weal's Common Space online news. 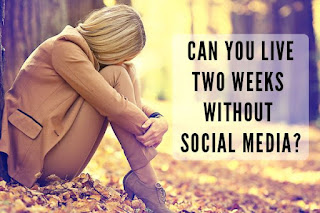 So, 5 days in and I have come to realise that a 30 day break is just plain daft. Yes I have the cold turkey shakes, but I also have no idea what is actually going on, in real time. I am behind in politics, and that actually feels really unsettling. There is too much going on that I am interested in and passionate about, but without SM, am disconnected from.  The modern world is connected through social media, and as such, if it's not on Facebook, no-one knows about it (or remembers)!

When we were away on holiday in May, I thoroughly enjoyed the few days away from the virtual world, and similarly, I have enjoyed the break this time. Obviously not the part where I'm out of touch with the stuff I deem important, but the freedom of not constantly checking my phone with each beep it emits. The constant updates from the 4 sites I frequent the most (Facebook, Twitter, Instagram and Pinterest) keep one's head firmly down, eyes focussed, thumbs scrolling.  I can hardly advise Kiddo about regulating "screen time" when my phone is never out my hand.  I have often said that I want to unplug and go back to a more simple time, but life is not like that anymore. In our instant world, almost everyone and everything is online.  However, there is a balance that has to be struck. Balance.  Not something this Gemini is very good at....

I will stick my neck out to say that most people are fairly balanced with their social media interactions, I know people who go for days without thinking about Facebook, or sitting infront of Pinterest for 4 hours planning their next project.  But I guess it depends on each individual's use of these sites : posting family pics and updates, or for info gathering, up to date news and connecting with like minded people, reconnecting with friends, organising events, groups and get-togethers, sharing info, promoting businesses or blogs, etc etc

My plan to get a handle on my SM use and achieve desired balance is to get shot of my smart phone, and just check up on my pages in the evening, as I used to do before getting hook on my smart phone 3.5years ago.  I have 7 months left on my contract and when the time comes for my upgrade I'm going for the basic calls and texts model (but want a flip/ clamshell model). If its not readily available on my ever present phone, I can't be distracted, and can then focus on actually living life rather than reading about other people's or live tweeting/instagraming every living second.

Since unplugging on Friday, I have been far more productive (surprise surprise).  The house is tidier, cleaner, I've read more of my books, made a filofax (I'm not paying £80 for an A5 sized one I wanted, so, yes, I made one!), found a new programme on Netflix (this might not seem like a big deal, but I don't watch much tv at all and wouldn't miss it if we removed it altogether. Anyways, Miss Fisher's Murder Mysteries is my new love - 1920's flapper/detective, set in Australia with THE most beautiful wardrobe and hair. She beats Poirot as my preferred 1920's detective), sorted out plans for the coming weeks/months (re registered our details, so all going well, and actually securing tickets,  we are off to Glastonbury next year!!!).  All the things I have been procrastinating on, are now inhand, due purely to having time to deal.  I am the biggest procrastinator, but without the SM time pit getting in the way, my days feel less wasted.

I am calling time on my 30 days offline, it is no longer serving its purpose. I need to get back intouch with my political world, with whats happening in the home ed world (for instance today Kiddo and I spent a great afternoon with worms and mud at Jupiter Urban Wildlife Centre, which without a friend on Facebook telling of its summer programme, I would not have known about it happening, or the other activities we have planned for the coming weeks) and just the stuff that makes my virtual world turn - and cut out the guff.  It's been a useful exercise in finding out what I needed and not, and realising that actually, a wee SM holiday is not a bad thing every now and again.  A time out to disconnect, recharge and plug back in when I need to.  A virtual spring clean of sorts, to keep a handle on what is important and what is a black hole.

Here's to being back online, catching up on what I've missed and living rather than updating statuses.