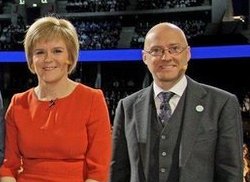 It's all I've heard about since reconnecting back online following a wee break. It's what I've heard Nicola Sturgeon mention on numerous occasions. It is one of the amendments to the Scottish Bill that is being thrashed out in Westminster (when I say thrashed out, I mean everything that has been proposed is being shot down and denied). It is something that I actually (up until this morning) had no real knowledge of, or to be honest, any interest in. It is one of those 'boring/over the head' areas of politics that passes me by. Finance, yaaaaawwwwwnnnnnnnnnn!!!!!!!!!!!!!!!!! However, it has now caused a rift in Scottish politics, the size of which, is yet to be seen.  The amendment has been voted on and vetoed in Westminster, and when Green MP Caroline Lucas revealed that she voted against full fiscal autonomy (FFA) and why she had, all hell broke loose north of the border! Online at least, anyway.

So what the hell is full fiscal autonomy and why the hell does it matter so much?
FFA is defined as: (from Wikipedia) :

Full fiscal autonomy (FFA) - also known as devolution max, devo-max, fiscal federalism, independence lite or independence minus - is a particular far-reaching devolution proposed for Scotland.  The term has come to describe a constitutional arrangement in which instead of receiving a block grant [Barnett Formula] from the UK Exchequer as at present, the Scottish Parliament would receive all taxation levied in Scotland; it would be responsible for most spending in Scotland but make payments to the UK Government to cover Scotland's share of the cost of providing certain  UK-wide services, including at least defence and the conduct of foreign relations.

Essentially, it is control over taxation and spending in Scotland devolved to Holyrood rather than Westminster.  As Stewart Hosie (SNP Deputy Leader) was reported in The Scotsman, 16th June 2015 saying:


Mr Hosie defined full fiscal autonomy as Scotland being able to collect all of its taxes and fund all of its spending.
He added: "It's not simply about responsibility for taxation, it's about responsibility for all spending outwith limited and agreed areas.
"We need and we deserve the bulk of decisions to be taken as close to the people as possible and more importantly we need these decisions to b taken in line with the aspirations and democratic choices of the Scottish people.
"We believe in the transfer of more power to Scotland not as an end in itself, but because the Scottish Government can exercise those powers to the benefit of Scotland's economy and society.
"It's not all about tax.  It's about other decision-making, for example, the minimum wage.  We support a rise in the minimum wage and we currently don't have the power in Scotland to do that."

Still with me, or bored yet and switched off?  Stay with me, this is important! Honest!

It's important because it is believed to be the last stop before full independence. It is important because not many people actually understand what FFA is.  In all honesty, do you know what it entails? It was certainly ootwi' ma ken.  Are the sound bites from the SNP enough to ensure you know and are happy with  the meaning of FFA and the effects of such in Scotland whilst we remain part of the United Kingdom? I ask this in genuine interest as the past 24 hours, it would seem that a differing opinion means you have turned your back on Scotland and other such bollocks.

So, Patrick Harvie, the Co-Convener of the Scottish Greens wrote this for The National on the 19th June 2015 and nowhere in that article does he mention that he opposes FFA, merely that the proposal in its current incarnation raises:

"serious concerns about the consequences if FFA or something like it was rushed through. If anyone who was on the Yes side of last year’s referendum sees fiscal autonomy as the “next best thing”, I’d have to say be careful what you wish for."

Fast forward to 1st July 2015 when Caroline Lucas voted against the FFA proposal in Westminster citing that she was acting on behalf of the interests of the Scottish Greens (it is worth noting here that The green Party and the Scottish Greens are 2 entirely separate parties) . Patrick qualifies her vote/comment with another article in The National saying:
...it made no sense for Scotland to have control of fiscal policy without control of monetary policy.
“The Scottish Greens backed independence to give Scotland a chance to change economic direction, a position respected and supported by colleagues such as Caroline Lucas,” he said. “We still support that. But neither a currency union, which we opposed during the referendum, nor a headlong rush toward a poorly designed scheme labelled full fiscal autonomy will achieve that."
Quite how Social Media has brought this to mean that the Greens have thrown Scotland under a bus and are about to lose their 1st choice position on the Holyrood Election 2nd vote, is quite beyond me, frankly.

Now, as I stated at the start of this rather lengthy post, political finances bore me and I am only just starting to wrap my head around FFA, although am now reading everything I can lay my eyes on regarding the matter.  Thankfully my friend and fellow Scottish Green is on hand to explain. Over to you,  Mari-Ellena Corvi :

Full fiscal autonomy for Scotland would be an alternative to the Barnett Formula, giving the Scottish Government control of how they raise funding (for gov spending) rather than having it all in a central pot and dividing it up via a formula. It makes no difference to how that money is spent, just how it is raised, so we're talking taxes, we could possibly be talking borrowing as well, but the SNP don't actually mention government borrowing when they talk FFA. The whole argument seems to be the SNP saying they can raise funds (taxes? borrowing?) and reduce austerity measures with that money. Now, unless they raise taxes (I don't think they'd do that, too unpopular) that means borrowing, governments borrow money by selling gilts, which are basically an IOU on the financial markets, they pay interest on these, and the IOUs can be sold from investor to investor as well (remember Enron? That was fun) The usual holders of these gilts are private banks (think high street banks, investment banks etc) and pension funds. There is no way of knowing what they will sell for (what the interest rate will be) before they are sold, it all depends on investor's confidence in the govts ability to pay, the higher uncertainty, the higher the rate, basically. The markets will judge Scotland's ability to pay on oil prices, guess what has plummeted? Oil prices...that's why people mention oil so much, it's not the cost and how much we earn from it, it's the spending and borrowing power it gives the government.
As for a central bank, that's the Bank of England, (set up by a Scotsman, but that's another story) When governments reeeeeally need money they can have their own bank buy it!  If Scotland had FFA, we still wouldn't have a central bank, monetary policy would still be set by the BofE (which sets monetary policy independently but is at the end of the day a nationalised UK institution). IMO this makes *full* fiscal autonomy impossible as part of the UK (and in fact if we were indy but using the UK pound)

Still following? Good, because we're not done yet!

If we didn't have oil (or at least left it in the ground) our ability to pay/repay loans would be judged on the economy in general.
FFA works with independence (with our own central bank and currency).
While there are other countries in the world with FFA and a shared central bank ( for example Europe), they don't necessarily have Westminster unwilling to co-operate.

So you see, the Scottish Greens have not abandoned Scotland - we just want MORE autonomy.  FULLY autonomous in terms of monetary and fiscal autonomy; not tied to Westminster or the Bank of England. Just as the Greens campaigned on during the indyref last year - this stance has not changed, nor has the want for independence.  I personally agree with the need to have our own currency and central bank, and wrote about it last year during the whole share the pound/plan b nonsense that blighted the indyref.  FFA without monetary policy is a poisoned chalice and thus set up to fail - Westminster and the SNP know this and are forcing the issue for their own ends. It was NEVER going to get through the Scotland Bill.

Plus, and this is a biggie - the Scottish Greens are a political party in their own right. Whilst they share a vision with the SNP for an independent country, they are not the SNP/SNP Lite or SNP B-team. Naturally there will be differences and disagreements between policies and strategies - this is politics. Nothing more. But remember - both Scottish Greens and SNP want independence - that has not changed!!

The threat of withholding the 2nd vote - really? Do you feel me looking at you?
Do you want a serious pro-indy party in opposition? Uh huh!

We all OK with FFA now?

Lets work together with whatever diluted bullshit Westminster vote on, under the Pish Commission and Cameron's pretence of possibilities of further devolution. The Establishment will be rubbing their hands in glee with the thought that Scotland is fracturing and dividing between which party has Scotland's best interests at heart on a single policy. This is not Mother says, we are allowed to disagree. Don't let them win. We will get indy, I just hope its before they bleed our resources dry first. But we need to stick together and unite under the joint vision, and work through the differences in Holyrood, where they belong.