Who ever thought is would be a good idea to get the bathroom and kitchen done at the same time wants to have a word with themselves...that would be me having a chat with myself then. The kitchen didn't need that much doing to it to be honest, but the work that was done was the dustiest!  I have done nothing apart from wipe and clear dust and stour from EVERY ROOM IN MY HOME for the past 2 weeks!

Last year we had to get our old boiler replaced, which meant that there was a lovely gap in the tiles from the chunky old boiler to where the new slim line one now resides. The tiles have been in place since the flat was built 17 years ago, and while they were not offensive, they were a bit dated and, well, meh. There was also the ugly exposed pipes to cover. Some people may consider them to be "industrial chic" but I find them unsightly. The worktop was also dated and I really didn't like the stainless steel sink/drainer. There is nothing wrong with the cupboards and in a small kitchen they can't really be reconfigured therefore I have no plans to change them So, as I said, not a big job, more just a case of "odd jobs" that are bit outwith our skill set.

This was the kitchen before we started 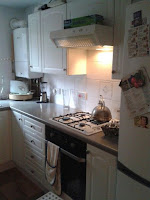 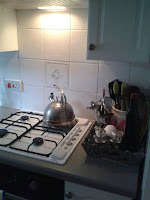 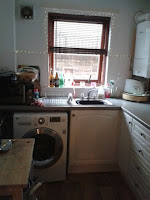 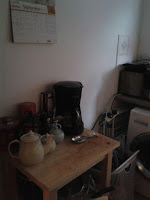 Once I had cleared the room of all the kitchen paraphernalia and clutter, I was surprised by how big and bright the room actually looked. It, like much of the flat, is quite dark. The view from my window is over the bin store and the public footpath between our building the the houses on the other side of the path. 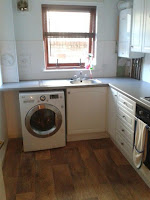 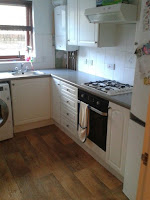 For the past 17 days we have had had various people working away both during the day and in early evening. It was meant to be a mere 5 days and done, but as always with work being carried out, it goes over (I watch Grand Designs!). Had it been done in the initial time there would have been no problem as Hubby was on annual leave, but as it ran over and he went back to work on the nightshift, working during the day when he was sleeping was not an option.

Now the work is complete (from the point of joiner/tiler/plumber/electrician) and all I have to do is paint the walls and get new lino.  I started the deep clean today within 5 minutes of our joiner finishing. The time has come to be ruthless and get rid of the kitchen crap we neither use or have room for. This is a very therapeutic process.  I also now have the time to decided where to put stuff back or re arrange, which is always fun.

My corner next to the cooker where I keep all my utensils has been sorted and cleaned. It is now time to say goodbye to amongst other things, a duplicate tattie masher and an avacado scooper we never use, along with a coffee bean grinder (not in pic) 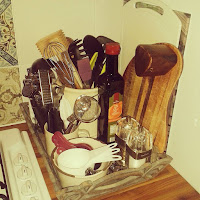 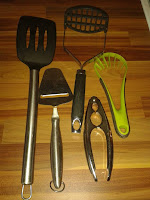 We are delighted with the work done and now I just need to decide what colour of paint to put on the walls (currently white and most definitely not staying that way).  Originally I wanted to wallpaper one wall with 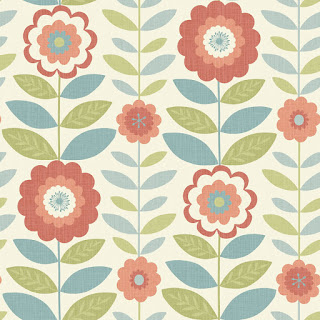 from Wilko but as I went for patterned tiles behind the cooker, I think this would be overkill in such a wee room (even though I love this paper).

Once the room is finished I will post the big reveal, in the meantime I will be cleaning......