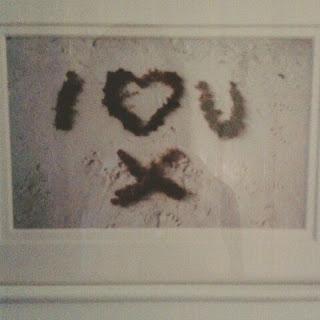 Written/made by me (during a Neil Buchanan Art Attack inspired

moment) on honeymoon with washed up pieces of seaweed

Today is our 10th Valentine's Day together. I remember our first one well which included me borrowing Hubby(then-Boyfriend)'s keys to his flat and making a gorgeous dinner (fillet steak), there were candles and red wine and LoveHeart sweeties. He bought me a huge bouquet of flowers. As I was spending more and more time at his, the bouquet was left in my flat and sadly withered with very little love or attention paid to it. Infact, I think when the flowers were finally tossed out, they may still have been in their wrapping.... Thankfully our relationship has blossomed far better than that first bouquet. 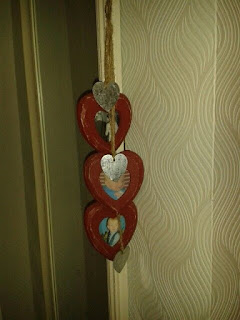 Heart shaped photo frames hanging from mirror in our bedroom

These days our February 14th's are a little different to that first romantic (apart from the dead flowers part) one. For instance, today, Hubby slept off his night shift from last night, before heading out for his shift tonight (it's 19.45 at time of writing and he left half an hour ago!). Kiddo and I spent a wonderful afternoon with a dear friend having a pub lunch and play in the park. In Hubby's wakened time we had dinner and conversation with Kiddo; no netflix & chill tonight. Bothered? Nope! We're both old cynics and couldn't really care for the corporate holiday.  We are romantic in our own way and all through the year. 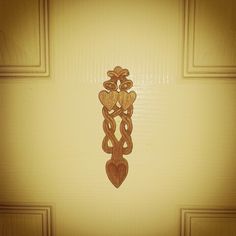 Welsh Love Spoon
Wedding gift from friends in Wales.
I stuck it to the outside of our bedroom door

I've not always been bah-humbug about inflated prices of flowers and the tsunami of red and pink at every turn in the shops. I mind at school, primary school (p7) in particular, picking the card to send and covering it and the envelope in rhymes and ditties, before sealing with a lipsticked kiss with S.W.A.L.K. written on top. The rhymes were not wholly appropriate for 11 year olds but we laughed and thought they were funny. I can't quite remember all of them, but there was the traditional "Roses are red" but with various versions and one about wanting pyjamas next to mine, but on a washing line or something of that ilk. All good natured fun and giggles.  Never one for being sad if I was single come Valentine's Day, it was merely an excuse (as if one was needed) for a evening of wine and gossip with the girls. We all love wine, and this is the day for love is it not??? I thought so. 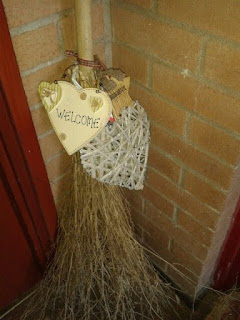 So why do we celebrate February 14th with love and romance? Who was St Valentine? Did you know there are superstitions attached to this day that we devote to our beloved? Well get comfy and let me share what I have learned - only knowledge though, not sharing my Turkish Delight #SorryNotSorry 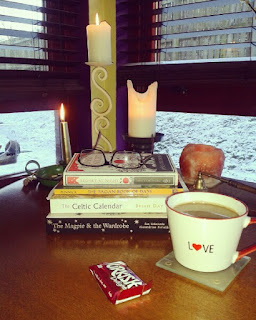 This was me getting organised to start writing up this post

The Roman Goddess Juno Februa gave her name to the month February. She happened to be the Patroness of the passion of love as well as the Goddess of maternal and married love.

Who was St Valentine?

Saint Valentine of Rome is a 3rd century Roman Saint.  The Saint of couples, love and, oddly, bee keepers.
The story goes that Valentine was a priest who used to marry couples in secret. It was during the rule of Claudius (where unmarried men were first priority for conscription to his army over married men) that Valentine was imprisoned for marrying off the potential foot soldiers of the army. Whilst in prison he befriended his jail keeper. In the final few days of his life he met the jail keeper's blind daughter and by placing his hands over her eyes, he healed her.  She was not allowed to meet with the priest again, and so wrote to him and they exchanged letters via her father. She gave her heart to the the Priest and according to the legend, he signed his last secret letter to her "Your Valentine". He was executed on 14th February.

In the West, the symbol for love, the heart, was first used in the 13th century

On the night of 13th February, umarried girls were to place 5 bay leaves under their pillow to dream of their husband.

Couples traditionally remained together for 1 year who were brought together by drawing their name from a paper lot (lucky draw).
The rose is red, the violet's blue,
The honey's sweet, and so are you.
Thou are my love and I am thine;
I drew thee to my Valentine:
The lot was cast and then I drew,
And Fortune said it shou'd be you.

Well, there we are then; love, romance and a wee history lesson. Not bad for a Sunday night. Although to be fair, I'm guessing a fair few people won't be reading this until tomorrow as far too busy with love and romance or wining and dining.  Whatever your plans for this Valentines evening, enjoy, I hope it is as glorious as the view outside my window this morning. 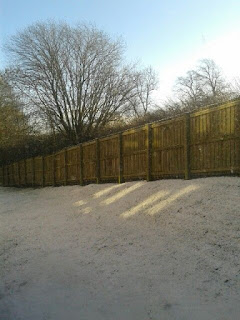 A beautiful start to the morning -
view from livingroom window