I knew it was coming. It was just a matter of when. I saw on Twitter late this morning that Nicola Sturgeon, Scotland's First Minister, had called a Press Conference at Bute House. Naturally I took to Twitter myself with a couple of tweets 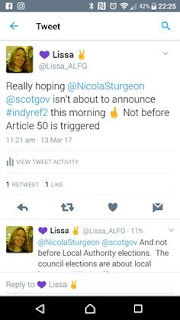 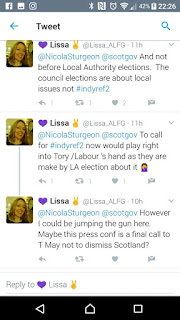 And then the news broke. I wasn't watching it live but instead following on Twitter. Over the course of the following hours I retweeted 52 different  tweets, getting more and more excited with each one.

Why? Because despite my concerns over timing, (the importance of Local Authority elections first!), Nicola has just informed us all that IndyRef2 is ON! Or rather #ScotRef is a go-go.

Initially I was a bit "aww man, couldn't she wait until 5th May?" at the same time as my heart and stomach were dancing and my head was buzzin. I couldn't wipe the grin off my face - hours later I still can't!

Some people are less than enthused by today's turn of events, which I get. We have had election after referendum after election after referendum for the past 3 years and in less than 2 months we have yet another election, some peeps are exhausted and experiencing neverendumitis or plain political apathy. Others voted NO in 2014 and their view has not changed so are really quite pissed off that their choice is being challenged again. I get that. But I am not one of these people. I can't wait to get back into it again. To change people's minds, to challenge them on what HAS changed in the last 3 years, about why indyref is here again rather than in 15 years time etc. And importantly to talk not fight about it. Twitter is clearly NOT the place to have such discussions because you cant engage with trolls or folk who are just looking for a rammy, coupled with the fact that Twitter is essentially an echo chamber, where like follows like - no-one is really reaching out to anyone with a differing opinion, unless BBC QT is on the tv at the same time.

But, and a big BUT at that, is that FIRST and FOREMOST we have to concentrate out efforts on the campaigns leading up to our Local Elections on 4th May. BEFORE indy we have to elect a Local Government to deal with local issues.  This is not based on whether we are indy or not, it actually has sweet fuck all to do with independence, despite what the Tory and Labour or LibDem campaigns will tell you.  I don't want to know their stance on indy, I want to know what their Councillors will do for my town; about schools & education/ housing/ social care/ wheelie bins and dog shit/ libraries/ services and buses etc. No Councillor can affect independence or a referendum, only how the Council operates in their area. Fact!  We can't lose sight of that matter.

However, come 5th May, it's indy all the way.